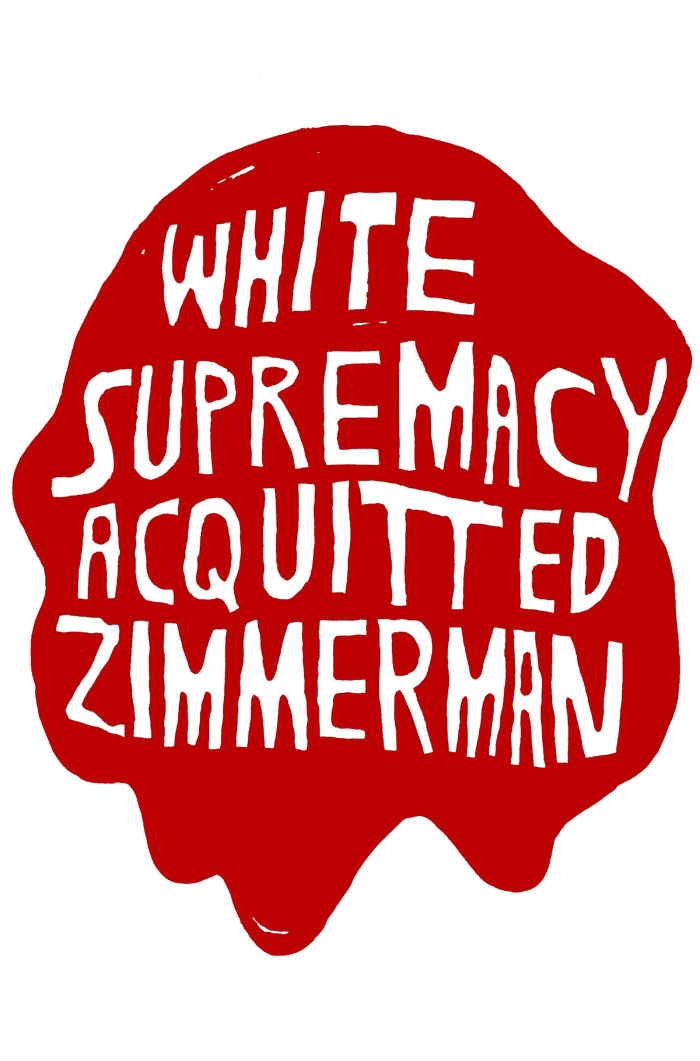 I’ve been following all the action in Pittsburgh following the Zimmerman verdict, and the connections to racial injustices locally in Pittsburgh. Yesterday, Pittsburgh folks delivered a letter of demands to the Mayor of Pittsburgh’s office, conducting a sit-in for 18 hours when he refused to see them, and then going to the Mayor’s house and tacking their demands on his front door, “Martin Luther style.”

One of the striking elements of these actions for me is the graphic worn on t-shirts and on posters of many of the participants, “White Supremacy Acquitted Zimmerman.”
The graphic was created and silkscreen printed by Queer and Brown in Steeltown, “printed to share with the people of Pittsburgh who condemn the not guilty verdict of George Zimmerman and to express solidarity with every black victim of injustice.”

“On the Saturday night acquittal of George Zimmerman, a group of queer black women in Pittsburgh called for a community gathering to recognize the injustice of the verdict. I created this image on Sunday morning from pain, tears and frustration over Trayvon Martin’s senseless murder. The posters and t-shirts generated were printed to share with the people of Pittsburgh who condemn the not guilty verdict of George Zimmerman and to express solidarity with every black victim of injustice.

On Monday afternoon I posted a photograph of posters and t-shirts to our blog and received over a thousand reblogs, likes and sales inquiries. Although I view this response as an affirmation of dissatisfaction with the verdict, I do not want to profit from this injustice. My stance is a rejection of a white supremacist capitalist system in which profit could be made from a black person’s death. This image is not for sale. Rather, I want to share it under a Creative Commons license which allows you to freely copy, distribute and transmit the image. You may not use this image for commercial purposes. You may not alter, transform or build upon this image. If you distribute this image online please attribute it to: www.queerandbrown.com.

The image I’ve created references Aura Bogado’s brilliant article, White Supremacy Acquits George Zimmerman. In it Bogado speaks to the ideology of white supremacy that taught Zimmerman that suspicious black men in his neighborhood were autom

atically “assholes who always get away.” I encourage the hundreds of Tumblr users who have reblogged, liked or commented on my image to read it.

Ayanah, on behalf of Q&B”