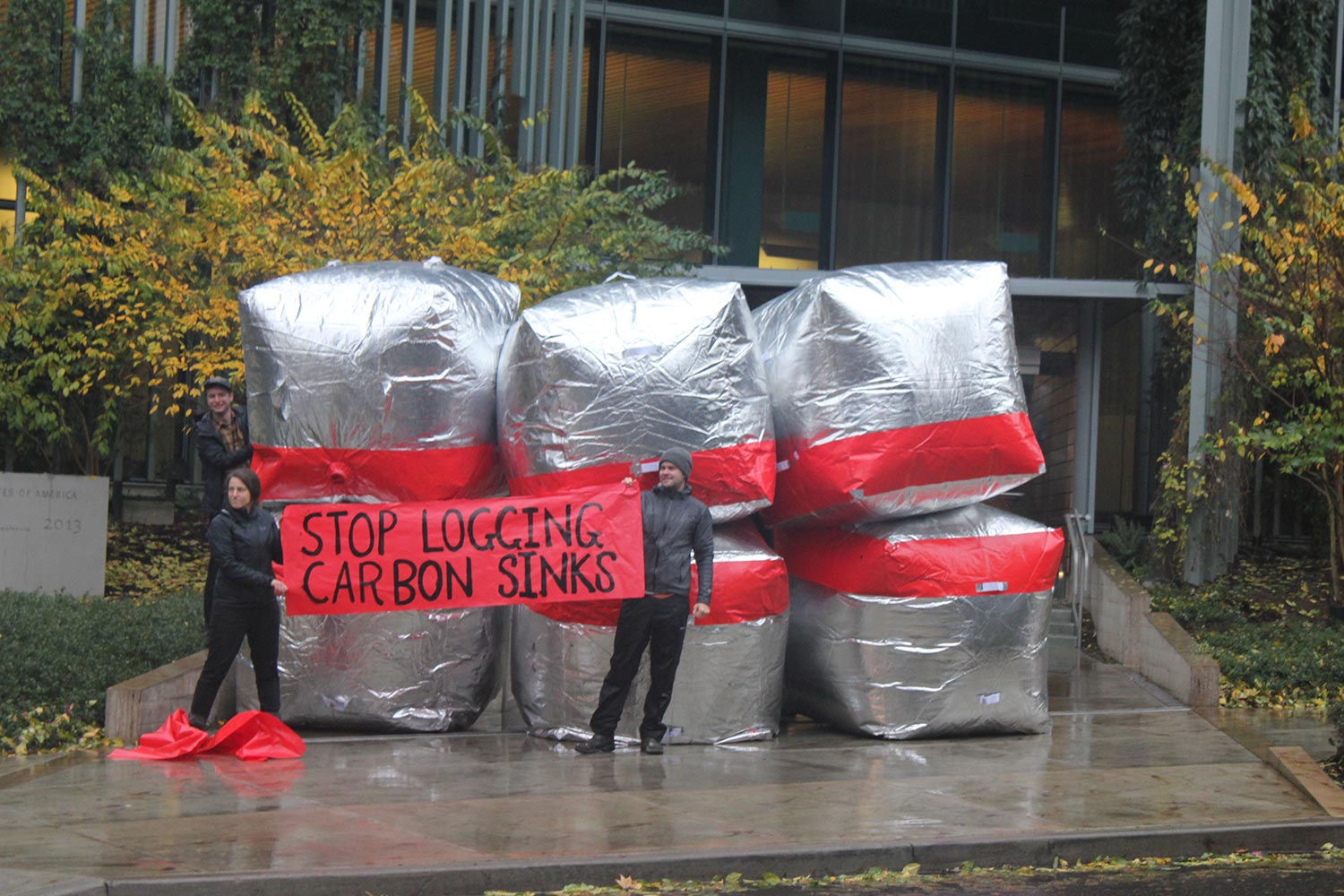 On the morning of December 11 a number of direct actions took places in cities around the world, in solidarity with the work giong on in Paris to force attention and action on the climate crisis. From Portland to New York and beyond, people used inflatable barricades to take space and make voices heard!

The large mylar cubes, marked with a bold red line that artist Artur Van Balen says represents “the lines that must not be crossed if we are to have a sustainable planet for all,” were made by Tools for Action, a Berlin-based arts collective. The original plan to use these cubes in Paris during the COP21 Global Climate Summit was altered by the November 13th terrorist attacks and subsequent state of emergency that barred protests. Instead of only in Paris, Tools for Action sent inflatable barricade kits to climate-activist groups around the world to emphasize the fact that climate change is a global problem that needs site-specific direct response.

*Route 202, Cortlandt, NY*– While the eyes of the world are trained on the Climate Talks in Paris, groups across the globe are turning the focus away from negotiators and onto local movements to halt climate change, including one right here in the Hudson Valley. Today local activists and residents set up inflatable barricades to halt construction of Spectra Energy’s Algonquin Pipeline as part of a coordinated global protest demanding action during the United Nations Climate Conference (COP21).

Resist AIM, a coalition formed to halt the construction of Spectra
Energy’s massive Algonquin Pipeline to carry fracked gas through New York, was one of the groups chosen by Tools for Action to receive the barricades. Their goal: halt construction of the pipeline that would carry volatile methane gas, endanger health and safety of local communities, and exacerbate global climate change. This morning, a group of local climate activists blocked the entrance to the downtown offices of the US Forest Service, demanding that there be stronger protections for the public forests in the region. The blockade was created by six large, inflatable cubes that were “Fabrique en Paris” as part of the demonstrations surrounding the climate treaty negotiations happening in Paris, France.

Mt. Hood National Forest is the sixth most productive carbon sink in the nation, while logging is the second largest emitter of carbon in Oregon. The Forest Service is currently managing forests in the Pacific Northwest with outdated standards that do not include any reference to climate change or carbon storage. Local forest advocates are demanding that the process for updating these rules no longer be delayed and include an immediate end of logging on public land.

“Our forests are part of the climate solution. We need to immediately stop putting additional stress on the ecosystem if we want to ensure the resiliency that we depend on for clean water and air.” said local forest advocate Amy Harwood. “We have an opportunity to draw our own red line here, ending logging on our national forests before it’s too late.” Climate justice groups have been using red lines to reference a suite of standards that need to be set for meaningful worldwide shifts in consumption. Anything less will lead to catastrophic breakdown in the livability on Earth.

The barricade is created with mylar objects created by Tools for Action, an international collective of artists. Like many people who traveled to Paris to participate in the demands for stronger climate action out of the COP21 negotiations, the state of emergency put into effect prevented many plans from taking place. They have now shared the “inflatable cobblestone barricade” with groups around the world to take coordinated action.

Mylar insulation foil, double stick carpet tape, and velcro – these are the materials of contemporary barricades. In Paris, the city where the concept of a barricade originated, Tools for Action has invented a new type of inflatable blockade in preparation for protest at the 2015 UN Climate Summit. The inflatable barricades were made in Paris and sent to different locations around the world.

The word “barricade” comes from the French word “barrique” meaning “barrel”. The first barricades were hollow barrels rolled out into 16th century streets, filled with stones and secured with metal chains. In November 2015, Tools for Action, a Berlin-based arts collective,  developed a barricade with a similar construction principle. Modular lightweight sculptures made of insulation foil are filled with air and attached together with velcro. A set of cube-shaped units (like cobblestones) can be quickly inflated at different locations, forming a line that hinders sight and movement when brought together en masse. They can be more than walls though – when people throw the individual cobblestones into the air, they turn a street into a spontaneous playground. In past interventions with inflatable cubes, some cubes landed on the police line during the 2012 May Day demonstrations in Berlin. The heavily armed police threw the cubes back, unwillingly entering into an absurd game of catch.

A red line is drawn across these inflatable barricades, symbolizing the demands drawn up by the Coalition 21, a network of 130 civil-society organisations. The red line entails a drastic and immediate reduction of greenhouse emissions and a recognition of the historical responsibility of industrialized countries. It also demands the installation of a monitoring system with the authority to penalize transgressors, and sufficient financing from more economically developed countries for a global transition to clean energy, including compensation for the suffering and loss that climate change has caused.

The original idea was to form an inflatable blockade in front of the UN conference in order to strike a mark for the demands of the Coalition 21. But when terrorist attacks struck Paris on November 13th, plans changed. A state of emergency was declared and the right to protest suspended for three months, spanning the duration of the UN summit. These measures banned a march for climate justice that had anticipated the arrival of more than 200,000 people from all over the world, and allowed the government to put many political organisers under house arrest.

In the aftermath of the attacks, Tools for Action sent inflatable barricade kits to climate-activist groups around the world, in places such as Portland, New York and London. This tactic addresses the fact that climate change is a global problem that needs a site-specific direct response.

The barricades were assembled by hundreds of helping hands, connecting French farmers opposing a destructive airport, locals from the Montreuil neighbourhood in Paris and solar panel engineers from California. The construction studio in the social center Jardin D’Alice was a meeting point for discussions, skill sharing, and imagining how this simple tool can be used.

One comment on “Inflatable Climate Action around the world!” 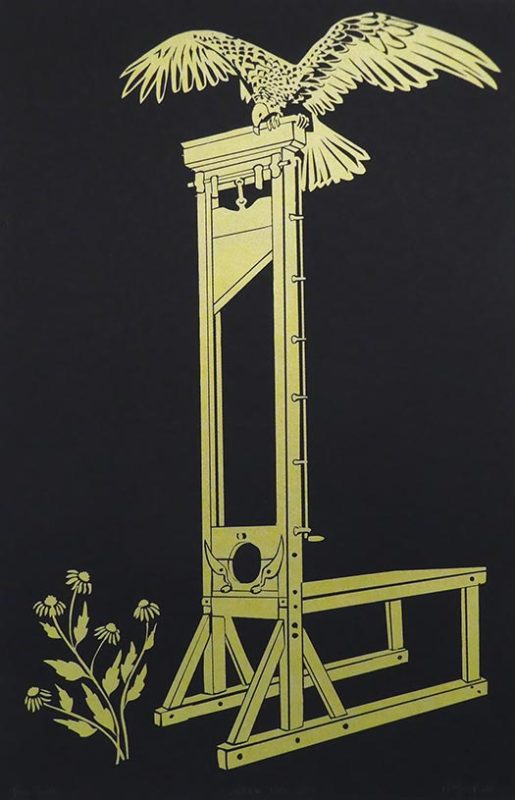