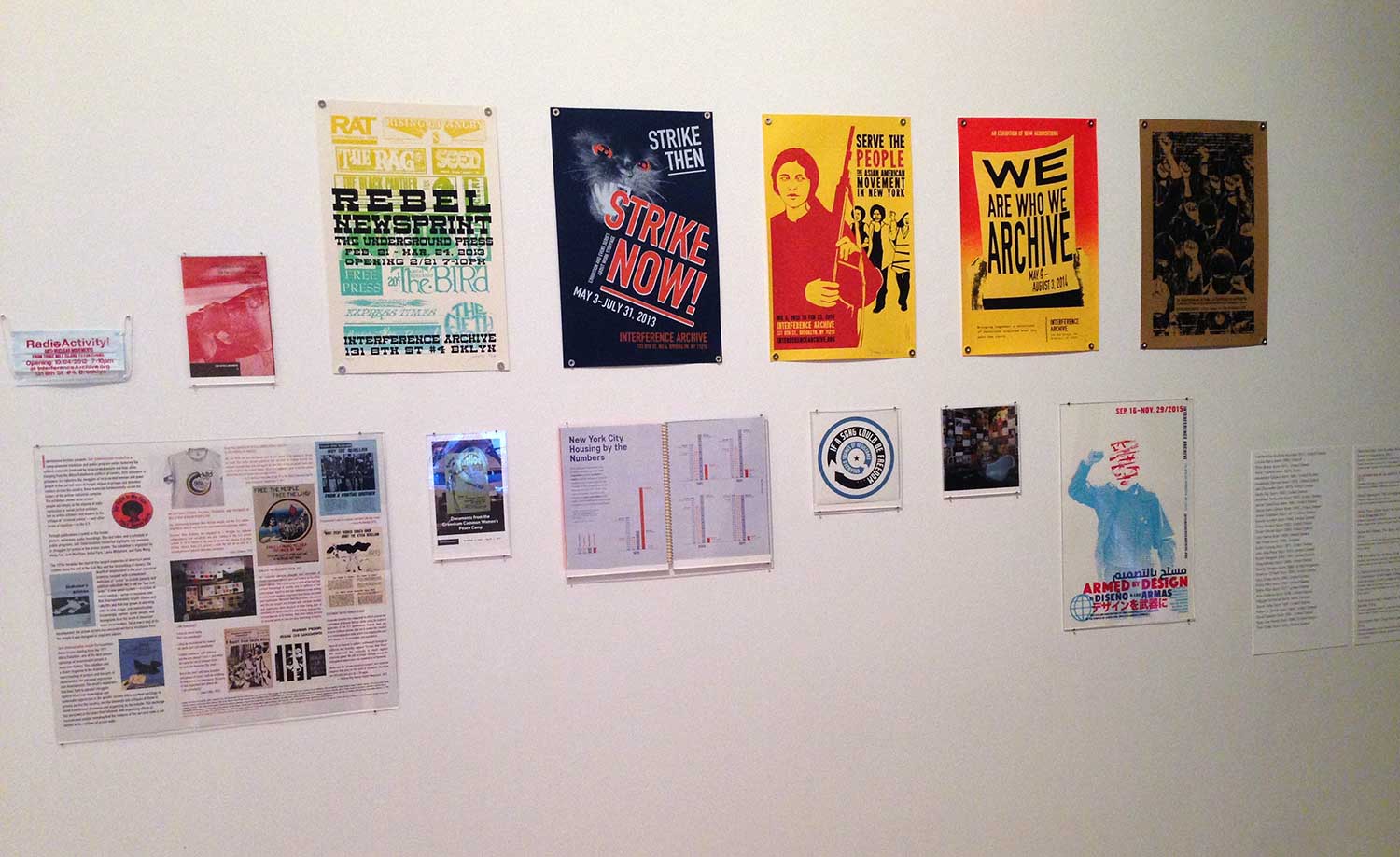 Interference Archive is included in the current exhibition Agitprop! in the Elizabeth A. Sackler Center for Feminist Art at the Brooklyn Museum. I have to say that the show is a strange mash-up of historical examples of agitprop (from the longer “agitational propaganda,” or politically instrumentalized culture, if you will…) and contemporary artists attempting to make art about politics.

On the historical side there are Soviet posters, Tina Modotti’s photographs of the Mexican Revolution, suffragette banners from the late 19th century, and material related to W.E.B. Dubois’ organizing against lynching. Most of this material is clearly agitprop. It’s goals are almost entirely political, and authorship is secondary to efficacy towards social ends. While it fits comfortably on the walls of the museum today, it likely wouldn’t have in the time period it was created. On the art side you’ve got Dread Scott, Martha Rosler, Yoko Ono, Coco Fusco, Lady Pink, Faith47, Futurefarmers, and many others. Although much of this work is interesting, and political in content, very little of it is actually agitprop. Its primary (although not always only) location is in the art world, there is little dissonance with the art institutions that house it, and it usually does more to comment on politics than to actually enact politics. There are also a fair amount of projects that fall somewhere between these two poles, including Ganzeer’s street art in Egypt, Enmedio’s art organizing in Barcelona, and Combat Paper’s work with military vets.

If I find fault with the show, it is that there is no guidance provided for the audience to navigate the important differences in motivations, constructions, distribution, and reception of all these different works. While Otabenga Jones & Associates piece on the Black Panther Breakfast for Children Program is a nice injection of what is politically possible (and necessary), it seems almost criminal to imply that the stakes for the artists (and the world) are the same as they were for DuBois’ anti-lynching work. I’m not arguing for a hierarchy, but for an acknowledgement that these things are very different, they do different things in the world, and to smash them all together actually obscures how culture works far more than it illuminates. Social movement work and cultural work can overlap, but they are not the same, and to imply as much, even obliquely, obscures the very tools and techniques we need to get to a more just world.

It was into this backdrop (as well as other controversies) that Interference Archive was invited to participate in the show. We decided that our involvement need not express direct political engagement with the show, but instead to focus our intervention on attempting to push for a clear and direct accounting of all the labor that goes into what we do—since labor is one the things the art world is masterful at making invisible. We feared that showing archival material from our collection in the context of the Brooklyn Museum would imply that we were artists authoring the work, which we fundamentally are not. We are archivists, activists, and artists who volunteer our time to ensure all have access to important political culture. So we decided to show a collection of the materials we produced for our events and exhibitions, which functions as an advertisement, hopefully encouraging visitors to the exhibition to come and visit us directly. In addition, rather than simply be credited as “Interference Archive,” we decided that everyone that has volunteered at the archive should be listed, so (as you can see in the photo below) everyone that wanted to be is included in the wall labels. We also included an accounting of all the labor that went into the production of the materials on the wall, so for each object their is a list of the people who organized the event it is related to, as well as who designed the object, who provided artwork, and who printed or produced it. It makes for almost comically long wall labels!

If you’re in Brooklyn, check out the show, but also come visit us directly at Interference Archive.
Subjects
Culture & Media