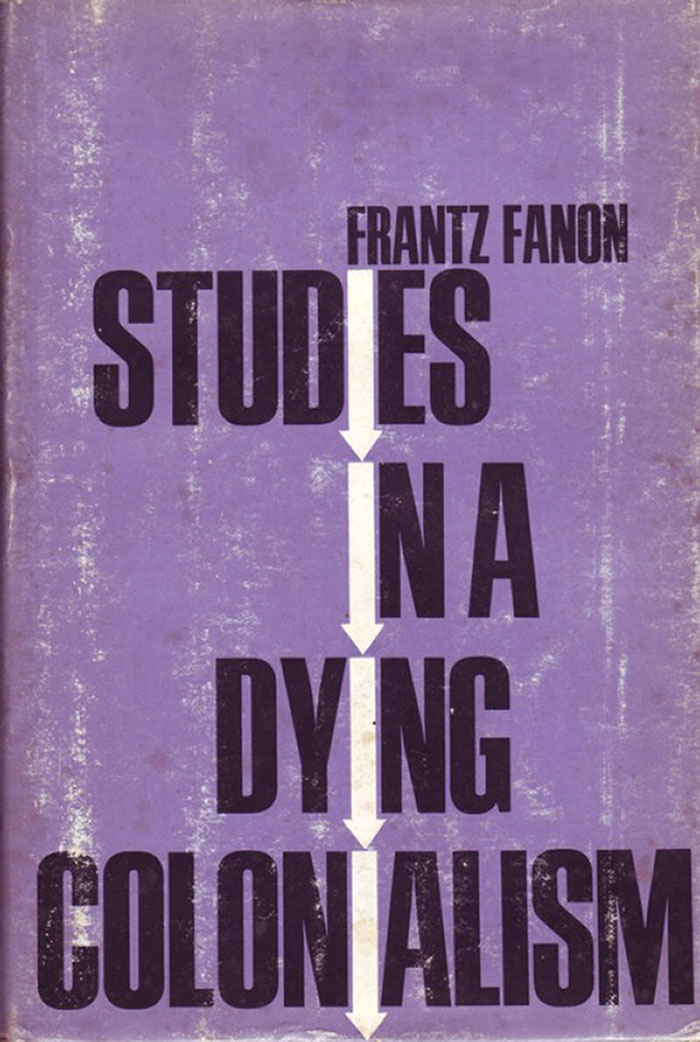 The second book written by Fanon was A Dying Colonialism. The book was originally published in 1959 by Maspero in France as Year Five of the Algerian Revolution, then later renamed Sociology of Revolution, titled Studies In A Dying Colonialism when translated into English and published by Monthly Review in 1965, and shortened to simply A Dying Colonialism when distributed as a mass-market paperback by Grove Press. (Two years after Wretched of the Earth was translated and published in English.) This book is Fanon’s look at the Algerian War, and specifically at the ways in which Algerians resist, both physically and psychologically, French colonialism and racism.

The dust jacket for Monthly Review’s 1965 edition is a great visual pun, the I’s in each word in the title lined up on top of each other and converted to downward arrows. It’s an elegant and strong graphic solution to imaging a subject of extreme complication.
The 1967 Grove cover (below left) follows closely in the footsteps of their paperback edition of Wretched of the Earth (see HERE), with the visual field filled to the edges by a mass of people in motion, heavily stylized in black. But unlike Wretched, these people appear less combative and more celebratory, which is confirmed by placing them on top of an array of color, beams of orange, red, and pink burst from the bottom left corner, creating something of a deification effect. While the cover of Wretched is dark and threatening, this cover is bright, and open. The mass of people fill more than half the cover, and push off the sides, they aren’t caged at the bottom of the page.

The 1994 edition is much less charming. It was designed by Jackie Seow and set the house style from the 90s on for all of Grove’s Fanon titles (excepting Black Skin, White Masks for some reason). As I said about this cover design HERE (regarding Wretched), the type screams “jungle font” way too obviously and awkwardly, and for a text only cover, it has none of the poise we see in the Monthly Review cover above. The color scheme at least is interesting, the lime green/yellow/greyish blue/black seems unique and rare, I don’t see many covers with this array. I wasn’t able to track down the Maspero first edition, but the below from 1962 is probably quite similar. All the late 50s, early 60s Fraçois Maspero Fanon covers are on a neutral paper stock, simple author and title in lowercase, and a different colored bar on the right side depending on the title. I don’t know enough about continental publishing/book design, but the font would be unusual on an Anglophone title, a bold, italicized serif with significantly thicker verticals.

By 1975 the title has changed (to Sociology of Revolution), and the cover has settled into a much more clean, traditional Continental style, a style Maspero used throughout the 70s-90s (and still uses on some titles today). Different editions of this book throughout that period all look very similar to this cover, but with different color cover stocks. Like almost all the other Fanon titles, Penguin put out the initial UK paperback edition (yet not until 1970s, years later than the U.S. editions). The initial UK hardback was likely published by someone else, but I haven’t been able to track down the citation or cover design. While Wretched has a unique style (and is the one Fanon title Penguin retained the rights to), A Dying Colonialism and Toward the African Revolution share the same stylistic conventions: Pelican books with black covers, white titles, blue author name, and a box with a white drop shadow that takes up a little more than half the cover. For this title the box is filled with type, with a Fanon quotation in drop shadowed yellow letters. The bottom box almost looks like a book on the book, or a monument or plaque.

A decade later the book was republished by Writers and Readers. This cover is more austere, the white field of the cover has the author and title at the top, and the only imagery is a hastily scrawled graffito stating “Freedom for Algeria.” It’s an interesting design choice, since Algeria was liberated from France in the early 60s, so it locks the book into a 20 year-old frame, rather than letting the more enduring concepts of struggle against colonialism be the selling point for the book. In 2006 the Algerian publisher ANEP released an edition with the original title L’An V de la Révolution algérienne, the cover is nothing worth much comment. Also in 2006, the Italian left publisher Derive Approdi published a new edition, part of a series of Fanon books they released. Each features an African mask filling the top half of the cover, with a color scheme matching the earth tones in the masks. I have the same concerns with this cover as I’ve written about before (HERE), I just don’t see why you would put a sub-Saharan mask on the cover of a book about Algeria. It seems politically, regionally, and aesthetically ignorant. The last two covers are Argentine and Japanese respectively. The Ediciones Testimoio edition is from 1970 and has a charming political pamphlet style cover. A simple red monotone photo of liberated Algerians is stamped with title in black, Sociology of Liberation, with a clear focus on “Liberation.” Simple and effective, this cover follows in the footsteps of thousands of covers designed and produced with limited resources and cheap printing materials.

The MacMillian Japan cover is another story entirely. It is very stylized and modern. Fanon’s face floats in blue mid-cover, anchored by green and black bars on the bottom. The simple act of coloring his face makes the cover almost pop art, and transcends all the much more boring covers that simply slap Fanon’s mug on the page. Next week I’m looking at the last Fanon title, Toward the African Revolution.