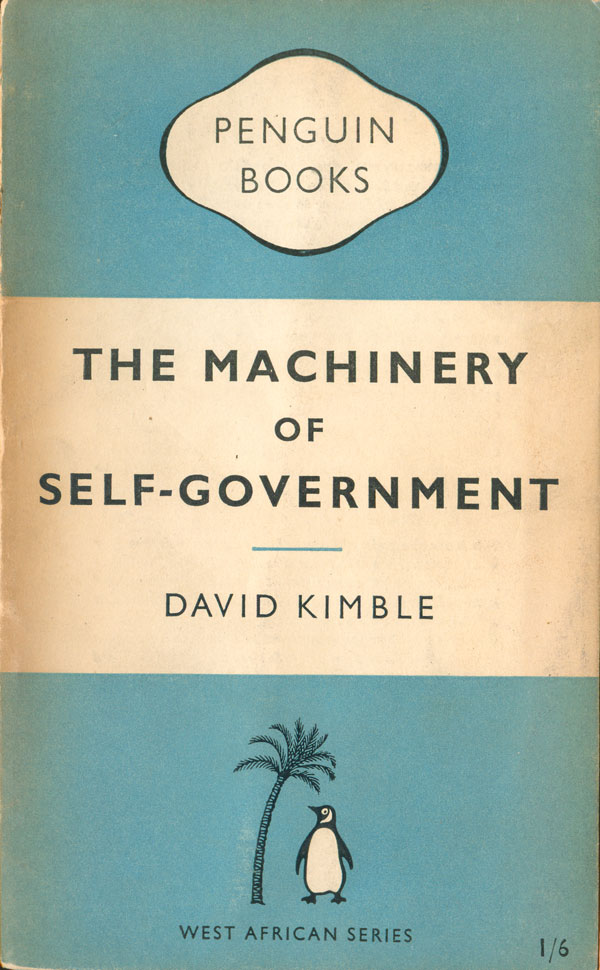 So over the past five weeks I’ve gone through the entire Penguin African Library (PAL), proper, but there is so much more to look at! There was actually a predecessor series to the PAL, the Penguin West African Series (WAS), which ran a total of 14 titles from 1953–1965. The majority of the titles were published before Penguin switched to pictorial covers, so they’re not that exciting to look at, but to the left is a good representation of the first ten numbers: David Kimble, The Machinery of Self-Government (WA04)(London: Penguin, 1953). Cover design unattributed. Kimble, and his wife Helen, also edited the series.

All 14 titles are numbered with a WA prefix. The first ten covers are handsome, as all the early Penguins are, but there’s not much to say about them. They do all share a signature light blue color and feature a logo of the penguin under a palm tree, which is a nice touch. For the most part the series is much less overtly political than the PAL, which makes sense since it was started before the real thrust of African decolonization. Overall, the focus is much more anthropological and scientific.

You’ll notice below that Labor Problems in West Africa(WA08, 1958) is labelled as part of the “African Series.” This change of series title happened in 1957 with the seventh title in the group.

Christianity and Politics in Africa (WA11, 1957) is the first book in the WAS with a cover illustration, and is the first of three great covers designed by John and Kenneth Astrop. They did a number of quality covers for Penguin in the 50s and 60s. These three are all marked by crisp illustrations, strong use of positive and negative space, and smart use of type. Here the short sleeved frock of an African priest becomes the surface of the cover, broken up by the hand holding the cross, which seems almost tentative in fulfilling the promise of the title, introducing Christianity. The thin line of pattern at the bottom of the shirt also marks this as an African priest. The cutting off of the head at the white collar at the top reads as slightly awkward, but there is something compelling about it as well, the brains behind this operation are located solidly off the page. The WAS signature blue is maintained as the background color. The series logo has changed as well, the palm tree replaced by a small Africa in an oval. If I have one complaint about this cover, it’s this white bar at the bottom holding the series info and price. It feels tacked on, and would have been better integrated into the overall design. The next two Astrop covers are just as strong. African Political Parties (WA12, 1961) has a fabulous cover, once again the play between positive and negative, black and white, really sets it off. The hand-drawn type also brings another level of depth to the design. I love it.
White Settlers in Tropical Africa (WA13, 1962) has a much more austere design, but it is as strong as the others, with the single white house successfully acting as a stand in for settlerism. The design intelligently reads multiple ways, with the whiteness of the house clearly setting it apart, but it’s shape and size fitting it in cleanly with the pattern of the other houses. The settler is both the same and set apart. The final book in the African Series is K. A. B. Jones-Quartey’s A Life of Azikiwe (WA14, 1965). It stands out from the rest for a number of reasons. It came out three years after the previous title in the series, and well into the run of the Penguin Africa Library, which supplanted the WAS. Other than being light blue, their is nothing that connects this cover to the earlier ones, it is photographic and has a completely different series titling mechanism, much more in common with the PAL books, or other Penguins of the mid-60s. Since I haven’t been able to find a clear reason why this title wasn’t absorbed into the Penguin African Library, I can only guess that PAL series editor Ronald Segal had reasons for wanting to exclude it (possibly because it appears to be a relatively uncritical biography of a Nigerian head of state). Anyway, outside of those issues it has a handsome cover, the duotoned blue and black photo with the white overlaid type is strong and effective.