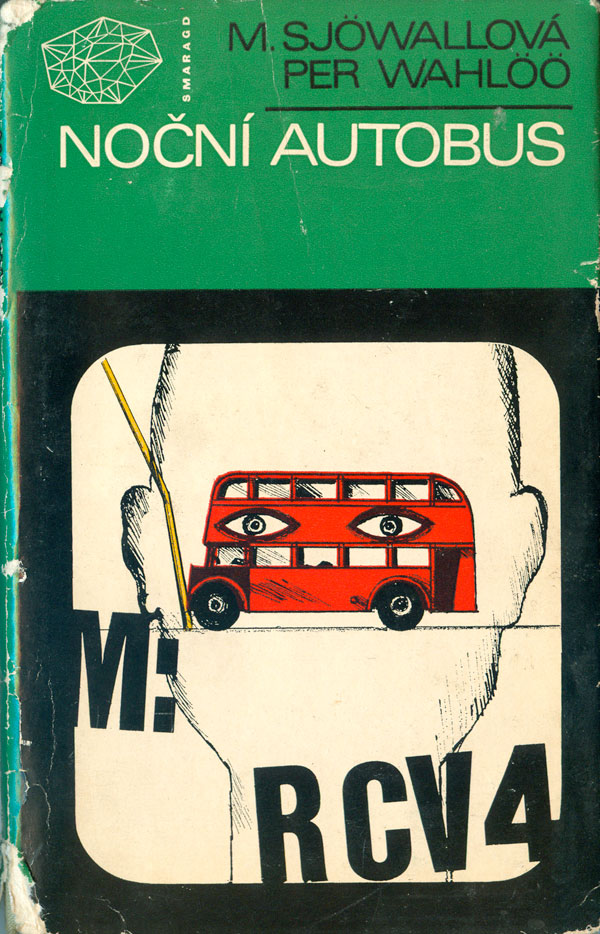 In early Summer I went with friends from Book Thug Nation to a regional book sale in Pennsylvania. The sale was awesome, thousands and thousands of books packed into a bible college gymnasium, and a surprising amount of really great stuff. The international section was a great success for French books for the store, but mostly schlock otherwise. Until I stumbled upon these three Czech books from the 1960s and 70s. All clothbound with dust jackets, the first couple are mysteries from the publisher Smaragd, the last one a novel by Louis Aragon.

The first book is a crime novel from one of my favorite series, the Martin Beck books by Maj Sjöwall and Per Wahlöö. Sjöwall and Wahlöö were Marxist writers from Sweden who used the form of the crime novel to critique Swedish society and the limits of social democracy. The book, titled Nocní Autobus (literally translated as Night Bus, but actually the novel called The Laughing Policeman in English) was originally published in 1968, and is the fourth in the Beck series. This edition was published in 1974 by the Prague-based Mladá Fronta, and is the 69th book in their crime imprint Edice Smaragd Svazek, or Green Emerald Editions. The series is beautifully designed, with every element consciously created. The dust jackets are smart, with quirky and suggestive illustrations. This one reads like a Polish film poster from the same period. The Green Emerald logo is a fabulous, sprawling crystal illustration, placed on the covers and the frontispiece of each book. The cloth under the dust jacket is also cool, with a great spine and nice “S” logo for Smaragd. And to top it all off, each book has a second significant illustration (each uniquely duotoned), opposite the title page. Nocní Autobus‘s is a gruesome pile of bodies. The second book in the series I found was Werner Steinberg’s Horká Stopa (Hot Track). I know a lot less about Steinberg (other than he was a German communist writer), but this was #67 in the Green Emerald series and has all the same great design elements. The cover illustration is a strange montage, with a house made creepy by the giant red eyeball, and the scattered letters in the top left corner adding a completely different vibe. The title page illustration is yellow and black this time, and much more cryptic than the one above. A white rose floats on a brick wall, documents seep out from the cracks, and smudgy fingerprints surround the title, with the T in Stopa a hammer, circled, referencing the Soviet hammer and sickle. The third book is Usmrcení, by the French Communist author Louis Aragon. It is a 1968 Czech translation of La Mise à mort (1965), or The Killing. It was published in Prague by Ceskoslovensky Spisovatel with a cover design by Jirí Balcar andlayout by Zdenek Seydl. The dust jacket is a convincing abstraction of the title, evoking a much more controlled version of popular expressionism a la Pollock. It’s difficult to tell, but the black scribbling is actually done on top of the cover design on the cloth, Aragon’s name repeated over and over in hollow stenciled letters. The red sans serif spine is a nice touch to counter the heavy covers.