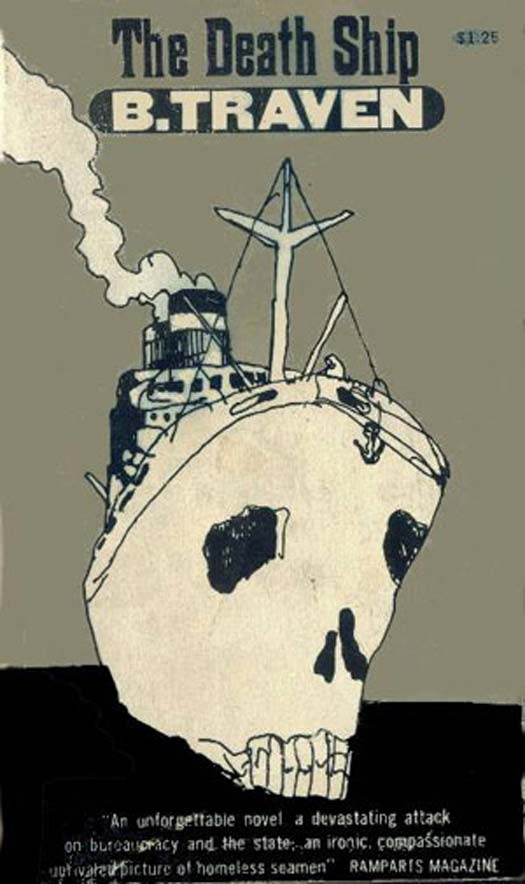 Next up in the B. Traven book cover-athon is The Death Ship. My favorite Traven novel (well, maybe a tie with The Rebellion of the Hanged), The Death Ship is a great story of a sailor on a ship write after WWI, just as the borders of the modern nation states across the world are being fully codified, leaving him and the rest of the crew a ship without a country, and thus invisible and impossible to the modern world. This book had had some great covers. I was only able to track down eleven, but I’ve seen some others I hope to still find and put up here sometime in the future. The cover to the left is one of the best, carrying an illustration by Seymour Chwast.

These are the dust jackets off of couple of the earliest printings, the left is British, the right is US (I believe…): Here’s the currently-available US paperback edition on Lawrence Hill, this has been the available cover since the early 90s, which isn’t so bad. I’ve got a fondness for the bright colors, which belie the repetitive and depressing contents, yet in a way strange capture the humor in the book. On the right is an old German cover, not sure of the date, but it’s much darker, with the little ship being squeezed out of the frame by the hand-scrawled “DEATHSHIP” of the title: Here’s a couple more versions I like, a dust jacket from the 50s or 60s where the snappy hand-drawn type rescues the doom-y illustration, and a great Spanish cover, with an illustration that has echoes of Helio Gomez: Here’s the embossings on three different German editions (the center is from 1926, the right from 1937): And finally a boring and ill-advised French cover (Editions La Decouverte) and a clean but boring German paperback: Great job again Josh,
I’ve got a copy with a black background with white & yellow text, nicer than the newer Italian & German versions.

Some more of his covers are here: http://www.btraven.com/english/works.html