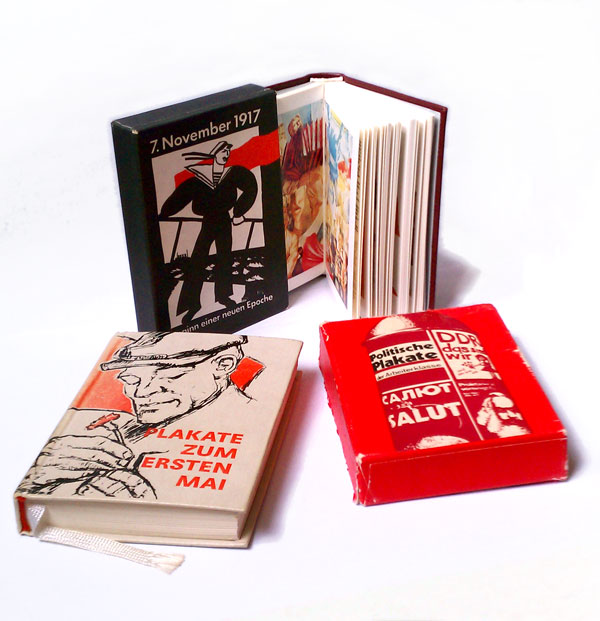 When I first traveled to Berlin back in 2007, doing research for Signal with Alec Dunn, we spent a lot of time haunting bookstores. Being a book junkie, there’s little as exciting as walking into a bookstore in a new country where all the books are unrecognizable. It’s intoxicating, getting hit with the rush of thousands of new titles and covers. Given Germany’s history, being split in two until twenty or so years ago, used bookstores are stocked with gems from not one country, but two—one of which was communist (at least in name) and had a very different design sense than the West.

At one book store I found a little book—and I do mean little—collecting posters and graphics from around the world celebrating the Russian Revolution. On future trips I found two more similar books—mini collections of political posters and artwork—printed in the GDR in the 1980s, presumably to sit on counters of bookstores there, just like little design books collecting Indian matchbook covers or sushi made into animal faces confront us at the registers of bookstores across the U.S. This first book is titled Roter Oktober: Plakate und Grafiker, Eine Auswahl 1924–1987 (Red October: Posters and Graphics, A Selection 1924-1987) and was published by Verlag für Agitations-und Anschauungsmittel Berlin (Publisher of Agitation and Visual Aids Berlin). The hardbound comes in a small slipcase, and you can see in the picture to the right the actual size—the book beneath is a standard 6″x9″ trade paperback. As you can see, the box doesn’t even bear the title of the book, just a full cover reproduction of one of the posters inside (the same poster is printed on both sides of the box, the spine is blank). When you slide out the book, you’re holding a faux leather volume, smaller than a cell phone, with a nice embossed hammer and sickle on the cover. Hopefully you can make it out in the image below. No words, just the Soviet logo. I’m unsure if the publishers were certain that the images would speak for themselves, and thus no need for any titling, or if the book was produced in a special context in which it didn’t have to compete with other books for sale in a shop. The book is split into two sections, the first quarter is a overview of the Russian revolution and the graphic arts produced in solidarity with it, the rest a collection of these image. The initial section is printed in black with red highlights on a nice grey paper, setting it off from the rest of the volume. The text has also been set and printed in four languages: German, Russian, English, and French. While the book is crowded with “classic” Soviet-looking posters, there are also some less expected images. Many spreads carry prints, drawings, and illustrations I’d never seen before, by less familiar artists. While the subject is the Russian Revolution, all of the artists are German, including familiar faces like John Heartfield. While this Max Schwimmer vision is still heroic, it at least stylistically splits with most commonly reproduced pro-Soviet work. I’m a lover of both flags and clean Modernist design, so I can’t even help myself in relation to this Wittkugel poster. The thin round numbers and waving flag with glowing orb behind it are so completely over the top, but it still really works for me.

It’s also interesting that the last four images I’ve shown are all from 1957, celebrating the 40 year anniversary of the revolution, yet they are all almost completely distinct from each other in how they represent it—except for the repeated use of flag imagery. A small number of page spreads have the posters laid out across the seam, which is a nice break from the formality of captions on the verso, images on the recto. More flags! Although abstract, the poster below conjures both industrial development and strength with the explosion of steel-like beams and also references the cannon imagery used in many of the well-known posters designed for Eisenstein’s Battleship Potemkin. I love this poster. The graphic just makes me laugh, although that might not be intended. I can’t help but see a little guy tip-toeing along, hiding behind a big red star. And finally, an interesting nod from behind the Iron Curtain that Marx and Lenin have themselves become commodities. Stay tuned for next week’s post, where I’ll break down the next in this series of GDR mini-books. 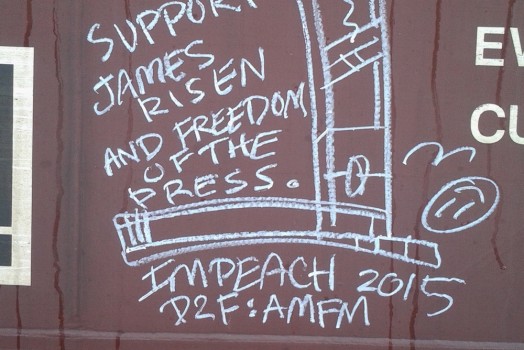 “Support James Risen and Freedom of the Press.” 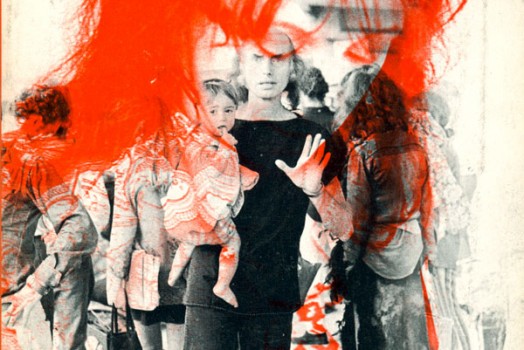 Back at the end of June I was in Toronto, strangely at an academic performance art conference to talk about the Spectres of Liberty project, and their was a table… 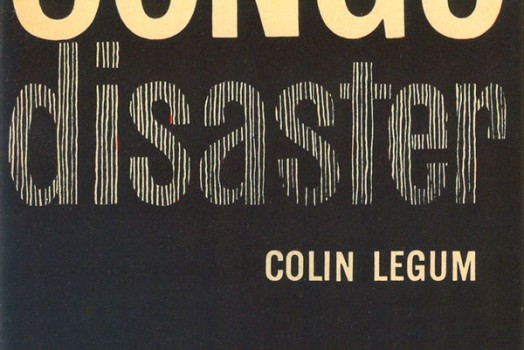 For the final installment of book covers from the Penguin African Library (see the first nine posts HERE), I’m going to take a look at the other books on Africa…