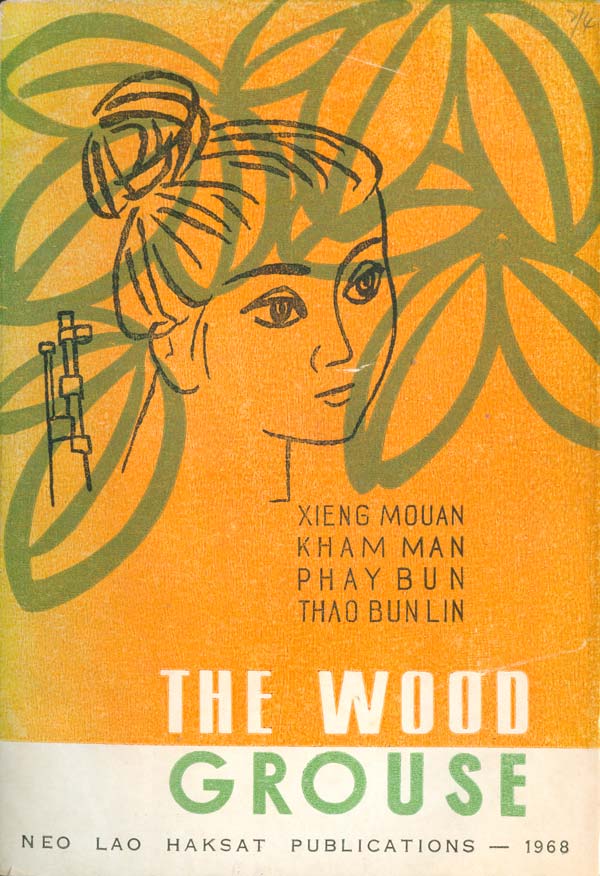 This week I’ve got another quirky book to share, but we’ll be jumping from East Germany to Laos. I found this small, cheaply produced book—The Wood Grouse—in Portland, OR. It was published in 1968 by Neo Lao Haksat Publications, and as far as I can figure Neo Lao Haksat is the Lao Patriotic Front, which evolved out of the Indochinese Communist Party founded by Ho Chi Minh. They were a pro-Vietnamese force during the 1950s and 60s while the Vietnam war was raging, and it seems like their publishing wing (and possibly other aspects) actually operated out of Hanoi. This book certainly looks and feels a lot like material coming out of Vietnam at the time.
It is a collection of nine anti-imperialist short stories (in English) written by the four authors listed on the cover, but the real draw for me was the design, typography, and cover/interior illustrations by Kham Deng.

The color on the cover is so roughly printed it has a grain, as if they were relief printed. The texture of the orange and green plates also run in opposite directions, giving the image much more depth when you look at it closely. The line drawing of the female fighter is simple—her head is disembodied—but just the top of her rifle lets you know she is a guerrilla, and that the leaves printed over her face are actually the foliage which hides and disguises her. The type on the cover is great, from the thin lines of the author’s names, to the contrast between the taller, German-like sans serif for The Wood, and the modified Futura used for Grouse. Each letter is slightly unique, and it is hard to tell if they are precisely drawn or printed wood type.

The back cover bears what I believe is the title of the book and the logo of Neo Lao Haksat Publications, both in Lao, and also the stamp of Banner Books and Crafts, a old Communist bookshop in Camden, London (which no longer exists). The overall design is clean and sharp, but not overdone, sort of a mix of Modernist and utilitarian. The pages are printed in a series of stapled folios glued together, on thin newsprint, or at least very acidic offset paper. The illustrations are the stand-out, especially the full page drawing of the two fighters in the leaves. I find something really compelling about this image, the people are obvious, but still get lost in the leaf pattern, and there is something slightly humorous, but also deadly in here.

The final illustration seems of a different quality altogether. These are clearly trees, and their is a figure centered in the foreground, but everything is much more abstract, the lines much less precise. The leaves, before clearly marked with hard lines, are now scribbles, the houses on the mountain are scratched box shapes. This book is interesting to me because it share some aesthetics and print qualities with the Foreign Languages Press, which was the English language organ of the Chinese Communist Party, but at the same time is also very unique. This is the only Neo Lao Haksat book I’ve stumbled across, but there are definitely more floating around, which I’ll be keeping my eye out for. I’ve also got a nice small collection of Foreign Languages Press publications I’ll put up here sometime soon.
Subjects
Culture & MediaGlobal SolidaritySocial Movements

Justseeds is uprooting our physical plant from its’ cookie-scented north Portland (Oregon) location and moving cross-country to Pittsburgh in mid-May. To commemorate this historic occasion (and in an attempt to… 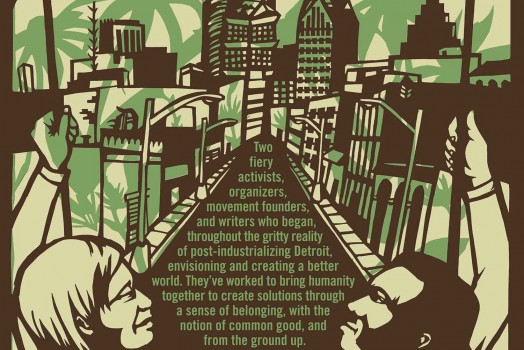 Bec Young designed the Grace Lee and Jimmy Boggs poster back in 2008. This is what she wrote about it back then:   I first became interested in moving to…

New animated print videos by my friend Nathan Meltz. These are amazing, defininitely take the 15 minutes to watch them!!!