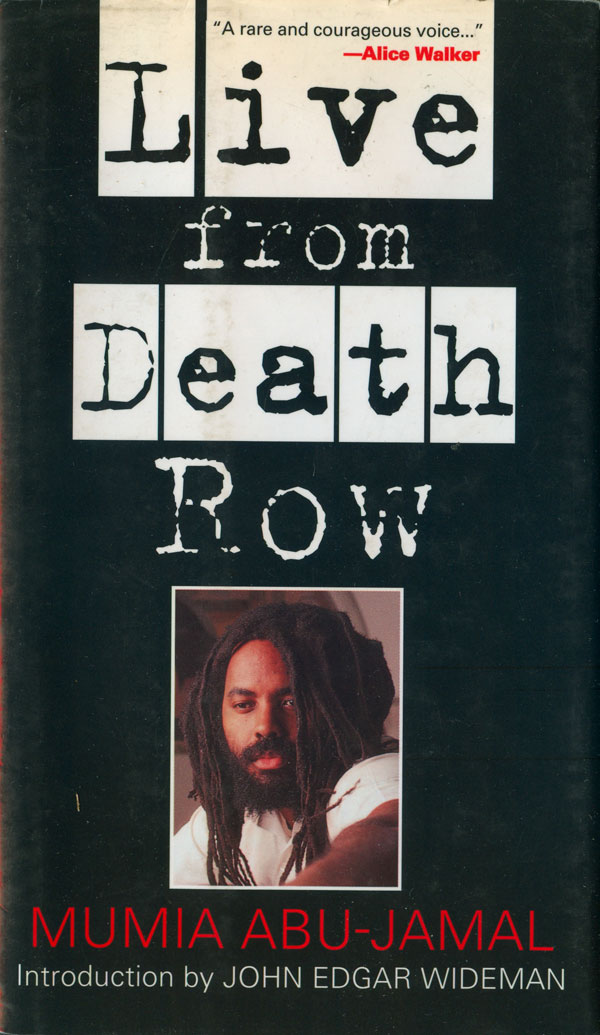 So moving on, this is the final entry of the posts covering the covers of prison books. I’ve missed a lot along the way, and maybe I’ll do a follow-up post in the future with some of the gems I skipped over this time through (if you have some handsome looking prison-related books, take pictures and email them to me!).

Last week I looked at the books by and and about George Jackson, the 60s/70s political prisoner par excellence. This week I turn to the closest thing to his contemporary equivalent, Mumia Abu-Jamal. For those that don’t know much about Mumia, rather than take the time here, you’re better off checking out his backstory HERE and HERE. Mumia was a Black Panther like Jackson, but he survived the original government crackdown on the movement, and was living as a journalist in Philadelphia in the 1970s until he was arrested and imprisoned in the early 1980s.

Although a popular movement for Mumia was building in the 1980s and early 90s, it didn’t really burst into public view until 1995, with the publishing of his first major book, the critically-acclaimed Live from Death Row. The cover design of the first (and subsequent American) editions is pretty staid (see above left), thankfully the stencil font is passed over, but is still evoked by the distressed typewriter lettering, and the breaks in the font backdrop. At the same time the typewriter reference makes sense, relating to Mumia’s career as a journalist, and the breaks in the white backdrop evoke prison bars. Like so many other prison-related books the cover is dominated by black. And the small inset photo of Mumia sets the tone for all the future covers of his books, which you will see rarely don’t include an image of him, adding to his celebrity.
Below are French and German volumes of the book, and both are pretty straight forward and even more conservative than the America (not surprising for the continental book trade), images of Mumia with basic sans serif type face across the top half of the covers. The German edition is slightly more nuanced, with the dark blue stripe down the left hand side. The Spanish edition is a bit more adventurous, with a photoshop-ed version of the photo from the American edition cocked at a tilt. Although the over-all cover is pretty ugly to me, I do like the concrete background texture (but not the green tint so much…). On the right is another French edition, I’m a little unclear, but I believe it is some sort of updated version of Live from Death Row. This is one of the best of these covers because it uses the photo successfully, rather than boxing Mumia in, it puts him front and center, bold and bleeding off the edges. The tilt is stylish, and the red underlining jazzes up the clean gothic font. Although it reads a little “1980s,” it still works better than all the other versions except the original American. After the popularity of Live from Death Row, the late 90s and early 2000s saw a mini-flood of Mumia and Mumia-related books. After Mumia’s short essays were banned from NPR, a collection of them came out, see below left. The red stamped “censored” definitely jumps off the page compared to the grayed cover image, but overall there is simply too many boxes and text on the cover, which interfere with the otherwise elegant placement of a pensive Mumia on top of a backdrop of his handwriting. To the right is another book, this one with a really evocative photo of Mumia, the fish-eye lens dramatically creating the sense of him being cramped in his cell. The ambiguity of his striped outfit also works in interesting ways, at least it makes me think of comfy pajamas, which contrast starkly with the cage he is in. I feel conflicted about the success of the handwritten titles, but the photograph is so strong, it really carries the cover. The designer was smart to largely let it speak for itself, and put it on a white background, instead of boxing it in with black. A couple of his other books stray from the pattern of straight facial photograph. Faith of Our Fathers uses a photo of a young man in front of a mural of Mumia, so indirectly representing him, both as the author, as a father figure, and—although I’m not sure it is intentional—as an absentee father, whose representation if present but is not embodied. Death Blossoms is a book that followed quickly on the heels of Live from Death Row, but on a smaller press and with less mass-market fanfare. This may be what allowed the designer more freedom, and the ability to create a really nice cover. Mumia’s face is absent for the first time, and instead we have handcuffed hands reaching to the sky. The hands are quite evocative, and create associations between imprisonment and faith, exactly the subject of the book. In addition they bring to mind the opening of the flowers referenced in the “Blossoms” of the title. Unlike some of the other covers, it has a relatively timeless quality, and is very effective overall. Here are the last of Mumia’s books proper. We Want Freedom is his memoirs of his time in the Black Panther Party. The photo of a young Mumia in the Black Panther office is great, but unfortunately the tilted and distressed black border doesn’t really add much to the mix. The use of the wavy title font is interesting to me. My first instinct is that it’s a poor choice, but it actually doesn’t look too bad in the final run. I would like to see the drafts of this cover, I wonder if a straight full bleed photo with a less extreme font choice was tried? Still Black, Still Strong has a really powerful cover. It follows the style of other Semiotext(e) books in this series (Native Agents, I believe) but in this cover the running lines of text in the background do a great job of evoking the government surveillance that underpins the stories of these 3 Black Panthers. The red, black, and green stripes are a refreshingly honest remembrance of the strident Black nationalism of the Panthers (and post-Panther movements like the Black Liberation Army and MOVE), which has been sanitized out of Mumia’s current public image. The Black Panther logo is also still such a powerful symbol, whether in the background on a banner in the We Want Freedom cover, or jumping out of the light blue square on this one. Along with his own books, there has been a steady stream of books about Mumia, and his strange and byzantine legal case. Although the facial photo/image of Mumia is still pretty standard, these covers are a bit more erratic. The Lindorff cover below to the left is pretty awful, the purple is overpowering, and with the bold block yellow title, it feels a bit like a souvenir from an LA Lakers game. The white background lines are surely intended to bring to mind prison bars, but I’m not sure what the horizontal bar across Mumia’s face is supposed to make us think of? An inverse Lone Ranger eye mask? Terry Bisson’s On a Move is much, much better. The purple of the color is less oppressive, and the photo of Mumia is warm, his outreached arm connecting him to us, the readers. The main title font is distressed, but still solid and contained, pushing into Mumia’s face, as if urging on the movement it’s claiming. Here are two more, both a mish-mash of ideas and styles that both work and don’t. The cover to the left is interesting to me. The handcuffs, oddly bright pink, let us know Mumia is in jail or prison, and the color is echoed in the pink hatch marks in the background, which let us know he’s been there for some time. The Williams cover gets points for being colorful, but is maybe too colorful. The sprayed, stencil-like font brings us back to prison covers 101, and the red and blue paint splotches in the background make the cover stand out, but I’m not sure what they do in relation to the subject matter. At this point, it’s hard not to get pretty tired of these straight-forward portrait shots of Mumia’s face. O’Connor’s cover to the left is pedestrian, but gets the job done. Mumia in shackles holding legal folders illustrates the difficulties of negotiating the law, especially when you are literally shackled. The image also echoes in a slight way the photo of George Jackson from the cover of Soledad Brother, shuffling along in restraints with a folder in hand. The Anderson cover on the other hand is refreshing, a complete abandonment of direct representation other either Mumia or prison. The expressionistic painting by Danny Simmons (yup, brother of Russell Simmons of Def Jam fame) is a different kind of interpretation of life in prison. The painting itself is a bold and interesting choice for a book cover, I just wish it didn’t have to compete with the box in a box design, or the lightning bolt background. As a saving grace, the opposition’s perspective is no better designed. To the left below is the cover of the hardback edition of Maureen Faulkner’s book, the wife of the police officer Mumia is accused of killing. Uggg-ly. The paperback is a little better, with an appropriately tear-jerky photograph of her mourning I believe, but I wasn’t able to track one down for this post.

To the right is a completely different treat, the cover of Mumia’s first and little-known book, Survival is Still a Crime. The copy I have (which unfortunately is just a photocopy, so I am unsure if the original cover was in color or not) was published by the Friends and Family of Mumia Abu-Jamal in 1990, collecting his writings from the 1980s, when he was still under the series influence of MOVE and John Africa. Very interesting, and although recognizable, it is a giant leap between this and his more polished writings that started appearing in the mid to late 1990s. Here is a partial bibliography of all the political prisoner books. Unfortunately I haven’t had the time to track down the citations for all the books, esp. the ones I don’t have in the archive: