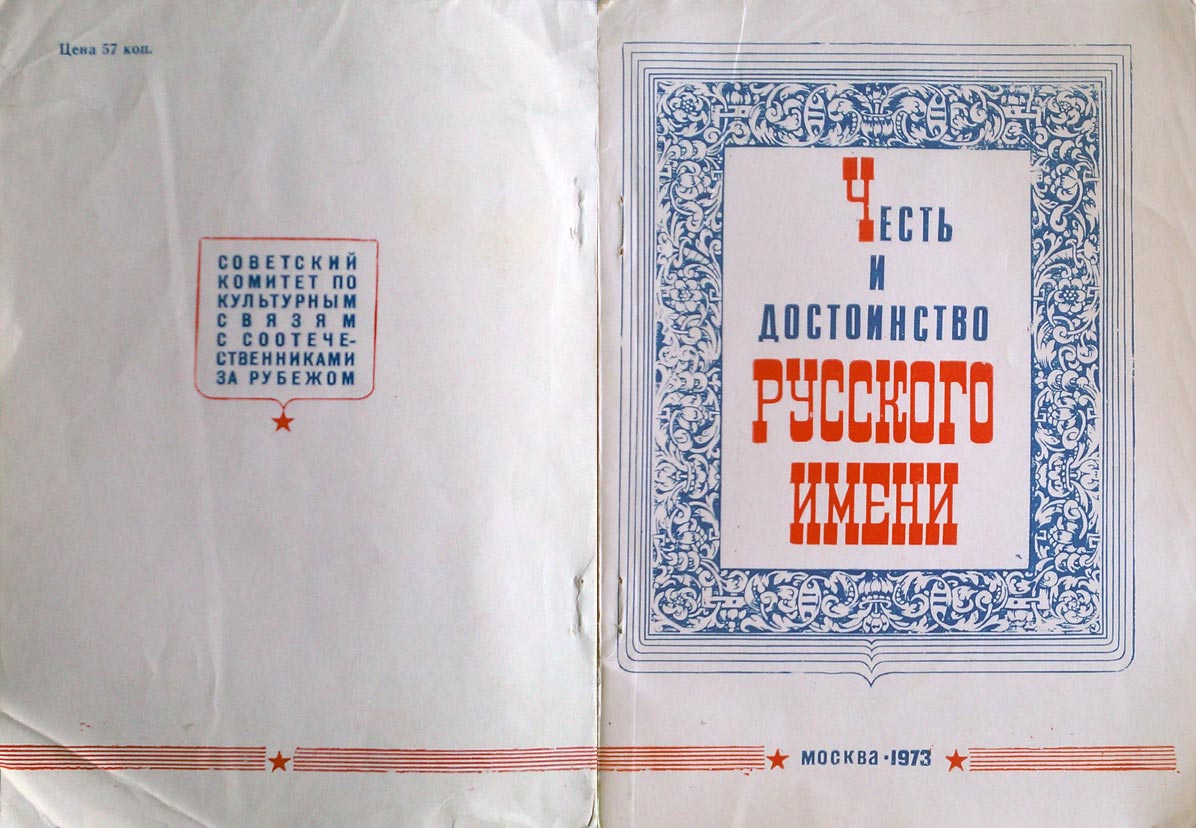 Here’s the second part of the Ukranian communist book stash I found in upstate NY. (Part one can be found HERE.) To the left is the cover for a book which is oddly titled Honor and Dignity of Russian Names (Moscow, 1973). The red type has that fabulous Western look, which I would suspect read as something completely different in 1970s USSR. The blue floral fill is very conservative/classical, but the concentric frames around it add a more modern touch. Paired with the patriotic/space program red stripes and stars at the bottom, it all makes for quite a quirky cover.The back cover lists either the author or publisher, Soviet Committee for Cultural Relations with Overseas Compatriots. The name is stretched and squished line by line into a tight little box of blue type, wrapped up in a frame emanating from a little red star, like the star is exclaiming the words!

Below to the right is a cloth bound volume entitled The Mogilev Region, a collection of writing and images showing off the agriculture and industry of said area. Next to that is The February Bourgeois-Democratic Revolution of 1917 by E. Fokin (1936), a board bound book with a great revolutionary-styled graphic of soldiers being heralded by a crowd throwing paper into the air. These next two books are more traditional, to the left a patterned/wallpaper cover of what I think is a poetry book by Mikalai Razhko with the word Byelorussia in the title, but I can find no record of the author or this book online anywhere. To the right is The Demographics of Byelorussia by Andrei Rakov with a nice simple line drawing of a family (interestingly sans father, but I have no idea why). The cover below to the left both looks like and as a military manual of some sort. It was published by the Artillery Academy in 1934, was written by M.I. Globus, and titled
Artillery Shells (plus something about igniting, path and trajectory of tracer shells as a subtitle). The rough-hewn paper stock was likely due to necessity, but it is very cool, it’s hard to find paper with that much floating in the pulp these days. I’m also enamored by the black and red vertical bar on the left, with the one red star at the top.
Next to that is a journal called Don (named after the river Don), this one from 1971. The cover is simple, and the large red circle, waves, and design constraint give the cover a Japanese feel. A. Sanderov’s Poetry (New York, 1929) could be mistaken for a anarcho-syndicalist pamphlet (which I suppose it could be, but seems doubtful). The red, black, and white bars tipped to an angle give the cover movement, while the hand-drawn type at a straight horizontal makes for a futurist looking design.

And finally for this week, hidden amongst the Cyrillic was this copy of What is Communism?, another pamphlet in the series produced in the early 70s by the Novosti Press Agency Publishing House in Moscow. My very first book cover blog post featured 3 others of these covers, which you can check out HERE. Those covers, like this one, are noteworthy for their simplicity and design efficiency, but also eclectic inspiration. This one looks like a 1930s union pamphlet. Next week I’ll wrap up these Ukranian covers with a couple last books, stay tuned!

Any information in that top book on the Honor and Dignity of the Russian name Larisa? Just curious, for purely personal reasons.