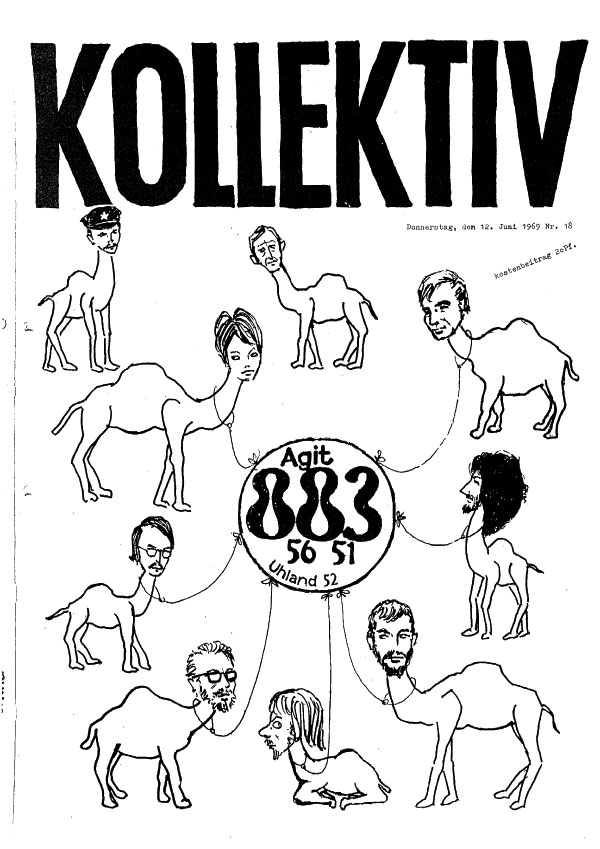 Here’s week two of covers from the German 60s/70s publication Agit 883. Last week (HERE) I looked at the covers of the first 13 (of 88) issues, and broke the covers roughly into four different design types. This week I’m going to look at some of the covers that fall into type 1: variations on the singular illustration or editorial cartoon as central graphic element.

Issue 18 to the right is a perfect example, the large title “Kollectiv” and the illustration of 9 people—represented as camels—fill the cover. Not exactly sure of the context of the image, but possibly the 7 tethered to the Agit logo are cartoons of the editorial staff?

Issues 28 and 29 both feature illustrations of cops on the cover, #28 has an image by Hachfeld, who had done a couple covers I looked at last week. (Rainer Hachfeld has since become a successful political editorial cartoonist.) On the cop’s pocket is an image of a gnome, which might be a reference to the Kabouters, a spin-off group from the Dutch Provo movement (Hachfeld’s simple line drawing style is also reminiscent of Provo artist Willem). Issue 29 has a very different illustration of a cop, this time a child-like crayon drawing with the words, “Hello there, the gas man is back!,” an accusation that the West German state is fascist. Issue #32 has another Hachfeld image, this one extremely provocative, with a giant cop, naked except helmet, chopping down a tiny tree sapling. Although the image is fabulous, the larger composition of the cover could be better. Issue 35 has a much more dense illustration, of a news-filled head having nails hammered into its scalp. I believe the title says, “education without revolutionary practice is opium for the people.” This cover marks the journal’s claim that armed struggle must accompany the development of revolutionary theory. 53’s cover is classic ultra-left, expensive liquor as molotov cocktail. 63 has a similar militancy, with a fist turning into a grenade and the text, “Journal of the Communist Fighting Rebels.” The cover of issue 73 is dominated by a pistol packing Santa Claus, the title saying something about Nicolas learning from the sale of housing. I assume this is reference to squatting in some way, but I’m not sure exactly what or how. The image seems clearly drawn specifically for this cover, but is stylistically nothing like any previous issue’s cover. #76 returns to the simple militancy of #s 53 and 63, a roughly sketched hand reaches down to pick up a paving stone. The title says “Our Ballots.” On both these issues the word Agit has been dropped from the cover, and the only title branding is a large black star with the number 883 inside it. The cover of issue 78 is another humorous line drawing cartoon: the giant dinosaur of Anarchism faces 4 cavemen, each labeled as a different Marxist group. At this point I believe the paper had taken a largely anti-Leninist and more anarchist turn, so possibly this is a joke about how even if the Marxists are more theoretically “evolved” it still takes all of their different grouplets to raise themselves to the stature of anarchism? Issue 83’s cover leans heavily on a reprint of a Ron Cobb illustration. Cobb was a popular U.S. cartoonist in the U.S. Underground Press.