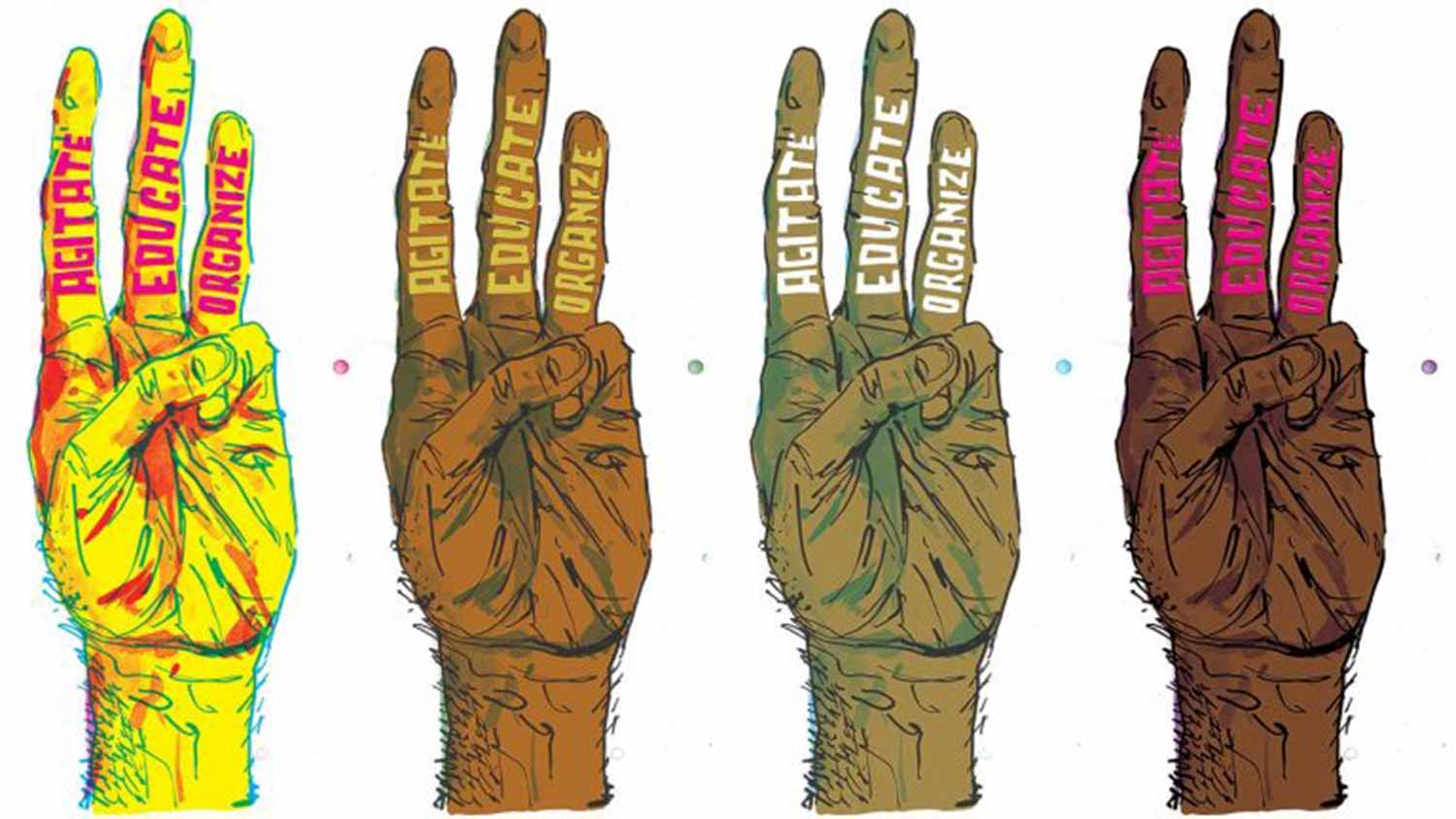 The people at Creative Commons do good work- promoting a healthy relationship to copyright and intellectual property, and working to ensure that a public domain stays public in the most effective of ways. Jennie Halperin, the CC communications manager, recently reached out to us for an interview, suggesting that our work creating and stockpiling downloadable graphics for use in protest and organizing was an excellent fit with the work CC does to change the way people think about images and their use. Questions were answered by Josh MacPhee and I, and presented graciously unedited (!). Check out the interview on their site here, and support their work and ideas when you can!

If you’ve ever attended a demonstration in North America, chances are you’ve seen the work of the 30 person artist collective Justseeds, a group of printmakers who have made an indelible impact on activism and art through their free, distributed graphics. The nearly twenty-year-old collective of printmakers work as agitators, educators, and artists to support grassroots struggles for peace and justice with an evocative style and large online catalog of free images that has helped them spread their message and aesthetic far past the streets and homes of activists around the world.

As a collective committed to social justice, they allow their members to work autonomously and from a diversity of perspectives and political positions – their vision that another world is possible depends upon it. In this interview with Creative Commons, cooperative co-founders Roger Peet and Josh MacPhee discuss solidarity, licensing, and their unique responsibility toward artists. All images in this piece are CC0. 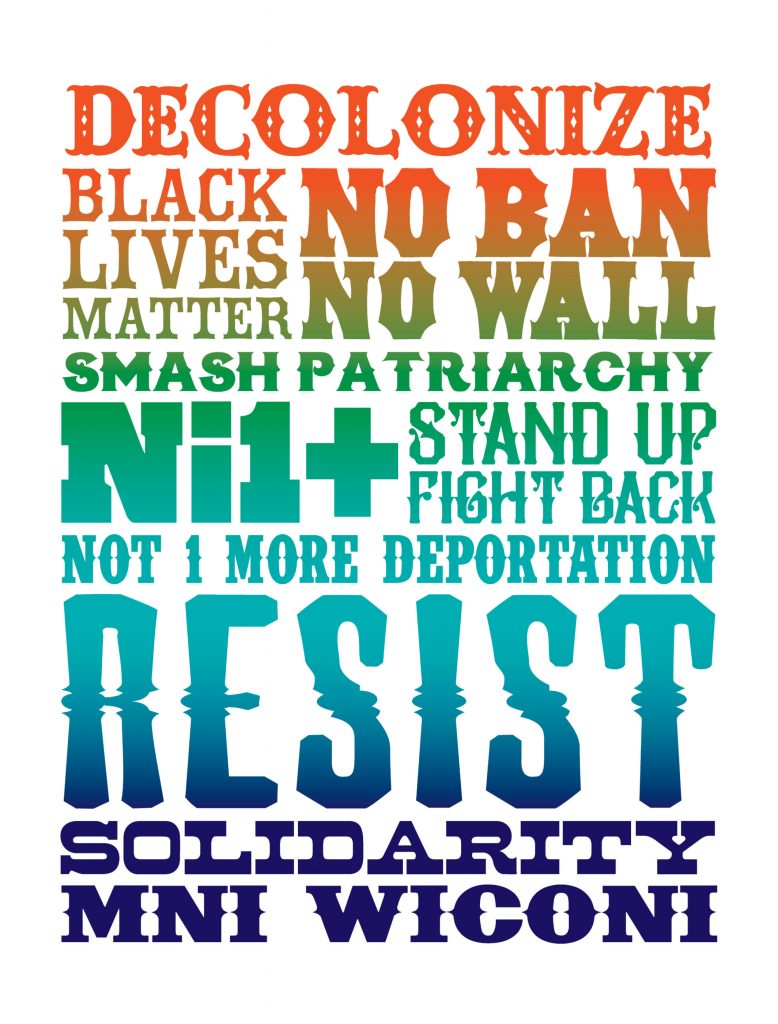 Roger: Something that has defined Justseeds from its earliest stages as a cooperative has been the breadth of perspectives and political positions within the group. We all agree on a lot of things, but certainly not everything, and I think that we’ve thrived by maintaining a space for a variety of visions. We trust each other to represent our individual views responsibly. We rely on our members to articulate their own ideas and their particular passions, and those are more or less subsumed into the broader public presentation of Justseeds. In that way we’re a complex political object- we don’t spend a lot of time articulating group positions, and we rely to a certain degree on our audience’s interpretation of the work that we create to produce our public persona. There is no central program that we adhere to, but we rely on that aforementioned trust to maintain the political pole around which the cooperative turns. The only case in which we vet work as a group is when we’re distributing art by people who aren’t members of the cooperative. 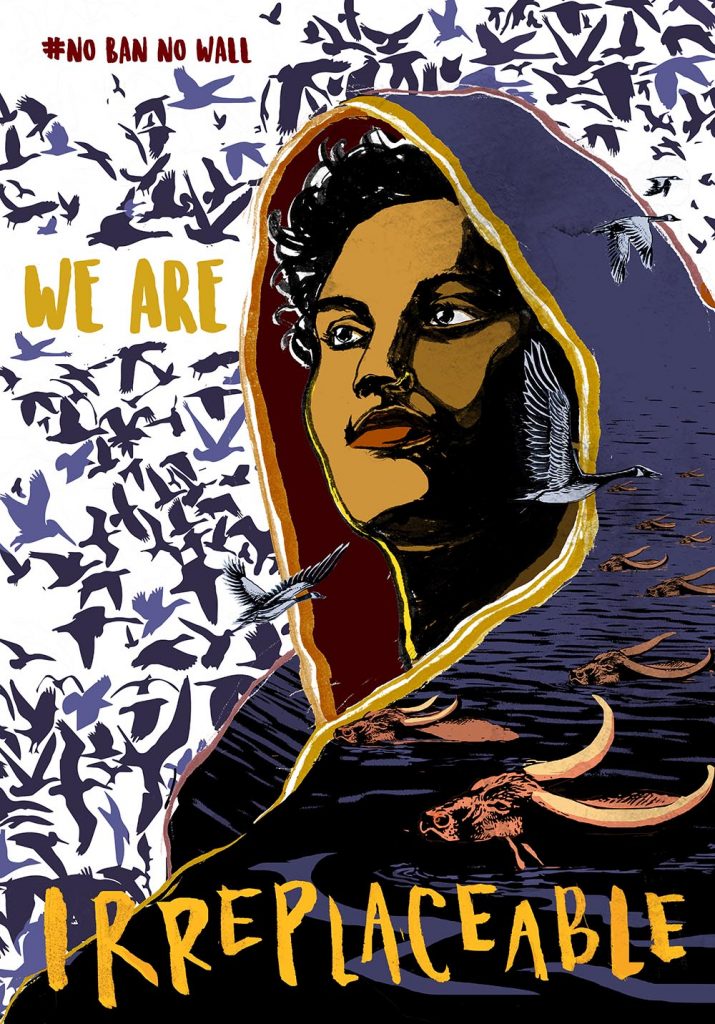 Josh: Autonomy is one of the key organizational principles of Justseeds. Some of it is built into our model, but much of it is a default function of being so geographically spread out, and increasingly coming from different experiences and communities. We have have little centralized and coordinated representation of “Justseeds.” Our most visible collective presence is our website, which has an extremely neutral design, allowing the content to drive the experience of the viewer/user, and the content is entirely created by individual coop members, from the items they sell to their blog posts to their downloadable graphics. Collective projects also have a place on the site, but they tend to be polyphonic, and are rarely represented with a single artists image or work.
Each member is afforded the trust to work, create, and organize in their communities as they see fit. The hope and goal is that we all will benefit from each others work. The more we each invest in the issues that are important to us, the better off we all are, and the more collective knowledge to draw from for our own goal work.

What is the role of the political artist in 2017?

Roger: To fight, bluntly. To maintain and broaden the fight for a different society and for a different relationship with the world outside of human priorities. To contribute to the destruction of Capitalism and white supremacy in whatever manner possible. Most importantly, however, the role of the political artist is to persist. Many of the members of Justseeds have been making political art in a variety of contexts for more than twenty years, and although the contemporary situation is more fraught on a daily basis, it’s not new.

We have been working to support political, social and environmental struggles and confronting the bitter brute heart of this society for decades, and we will continue to do so- constantly in pursuit of new methods and new alliances by which to achieve a new world.

Josh: I’m not sure it’s a new role, but it seems much more clearly now to be the creation of culture which furthers and amplifies the work that communities and groups are doing on the ground in protests, actions, organizing, and campaigning. Our art and projects role out in the street, in community spaces, within the media, across social media, and in our private spaces. All are important venues for pushing forward messages and ideas. 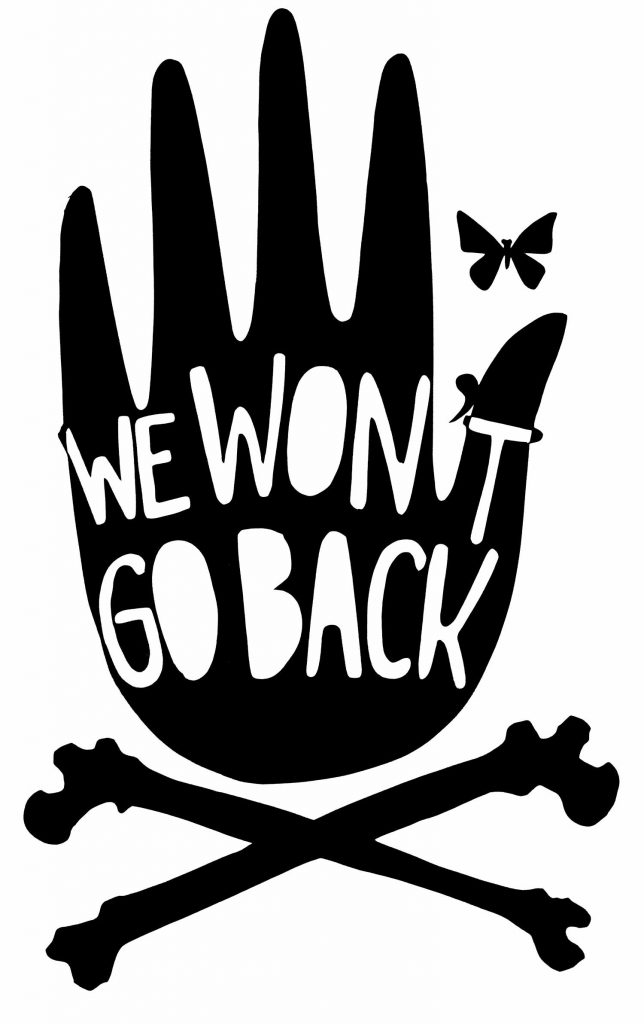 We Won’t Go Back, Roger Peet

In addition, artists have the privilege to raise questions and make challenging images which might not be at the top of the agenda for a very goals-oriented campaign or organization. We need instrumentalized protest culture, but we also need work that challenges norms, makes audiences inquisitive, and threatens the status quo in its own right.

How do you deal with varying approaches to copyright within the organization? For example, much of Nicolas Lampert’s work is Creative Commons, but many other artists don’t adopt the CC label, even though their work is free to reproduce and share? What kinds of tools do you use to support artists who want to work within your collective and their differing approaches to collective work and action?

Roger: I think the reason that most people in Justseeds don’t apply a Creative Commons assignation to their work is that they’re unfamiliar with how it works, or that we as a group have a rather blasé attitude to how our work might populate the public domain. Personally I feel that a lot of the work that I make available on our free graphics page is geared towards a specific audience, and that I more or less trust that audience to use it as they and I might see fit. I realize that’s a pretty naïve attitude but I haven’t had any experiences that have pushed me away from that position. Yet. It would probably behoove us to develop an institutional policy whereby we assign all graphics with a Creative Commons license- maybe we’ll get around to that after this interview.

Josh: I honestly don’t think most of us have put a lot of thought into it. I know that when Favianna Rodriguez and I put out Reproduce and Revolt, a book of political graphics intended to be used by activists and organizers, we put the entire book under Creative Commons license. But for my own work, I never even think about it—instead I just almost always give permission when ever anyone asks. It’s not because I even have any criticism of CC, I’m just generally not that concerned about who uses my work. 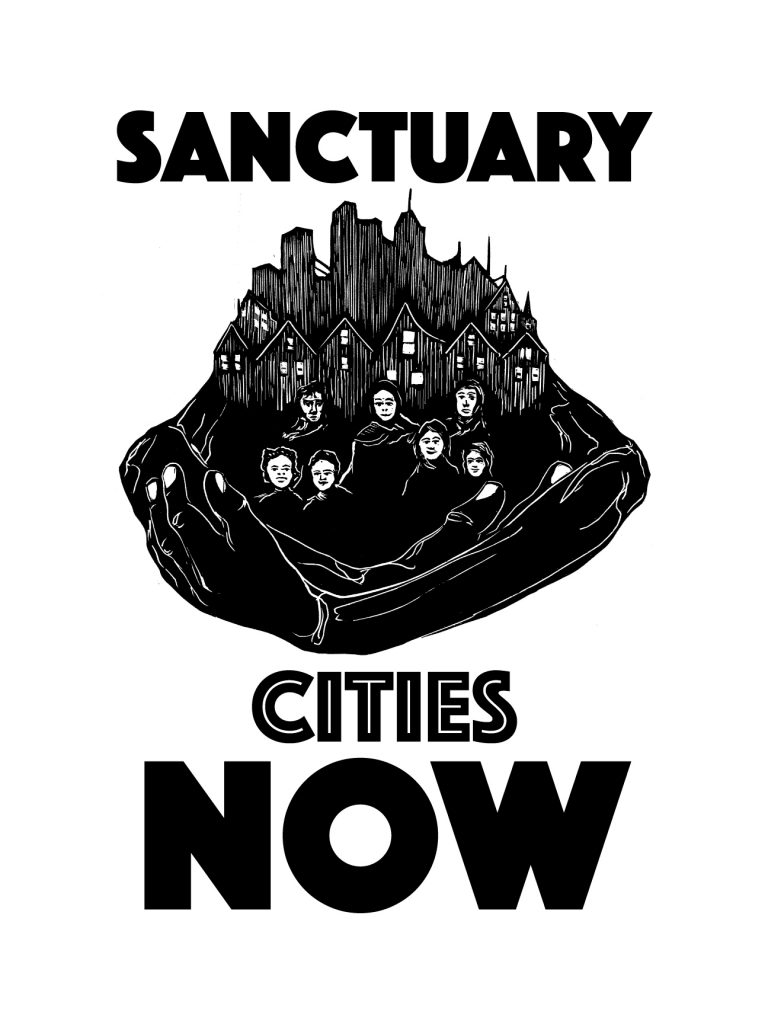 How are you working toward a culture of the commons, where artists and communities can share resources together? How does your work promote giving and gratitude?

Roger: Trying to make a living as an artist is a challenging prospect, and perhaps especially challenging as a political artist. There is a lot of pressure on artists to make their political work available for free, or to do new work in support of causes without expectation of remuneration. It can be a difficult line to walk, but I think that Justseeds artists have, in general, a pretty responsive and responsible attitude towards what they are and aren’t willing to do for free. Basically that could boil down to “If nobody’s making any money, then I will gladly contribute my work for free. If people are getting paid, however, then I the artist also need to be paid.” As political artists, all of the members of Justseeds make a lot of free work for movements and causes because we feel that we are a part of those movements, or that we feel compelled to offer our art to them as a gesture of solidarity or support. Much of our work is about ideas, and we want those ideas to spread- so a lot of our work is always going to be available for free.
Something that I like to do with my work is to create an edition of prints featuring an image that I offer for sale on the Justseeds site- and then also create a high-res downloadable graphic version of that image that I put on our free graphics page. What I hope happens in that situation is that people wanting to use my image for political work will download it and do what they need to with it, and that those who want a nice, handmade version of it for their workspace or as a gift will purchase the print.

Josh: I really wanted to build into our new website a solid, functional, searchable, and expandable free graphics page, because in my experience so many artists and organizers want to create downloadable graphics, and set up individual silo-ed sites for their projects—whether its a set of anti-war posters, or images related to the environment, or graphics about reproductive justice—and they promote the site for a week or a month or a year, and then the site slowly descends into the swamp of the internet, never to be visited again. One of the real benefits of Justseeds is that we already have a consistent flow of traffic of the very kinds of people that are looking for graphics to download, so we are a perfect aggregator. People have raised questions about how it might be perceived that we are using the free graphics as “bait” to bring people to the site to buy things, but I actually think it functions the other way around. People come to buy things, and then see how much cool stuff they can just download for free. Hopefully in the long run people will do enough of both to allow us to keep going, and to keep building a broader and deeper collection of free images. 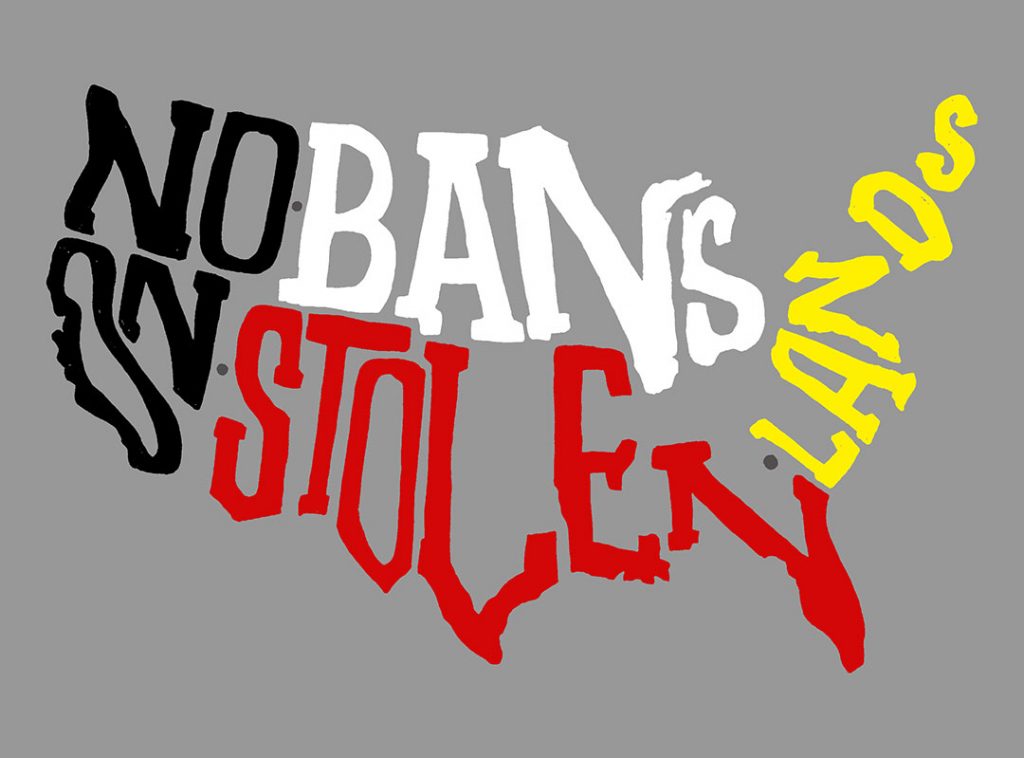 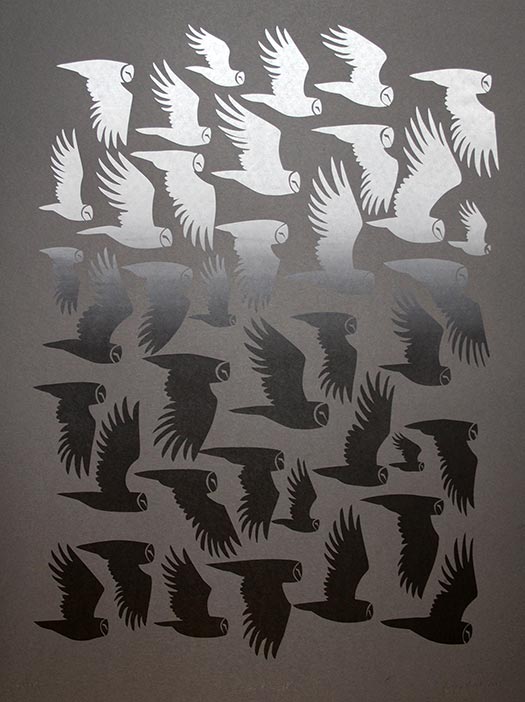