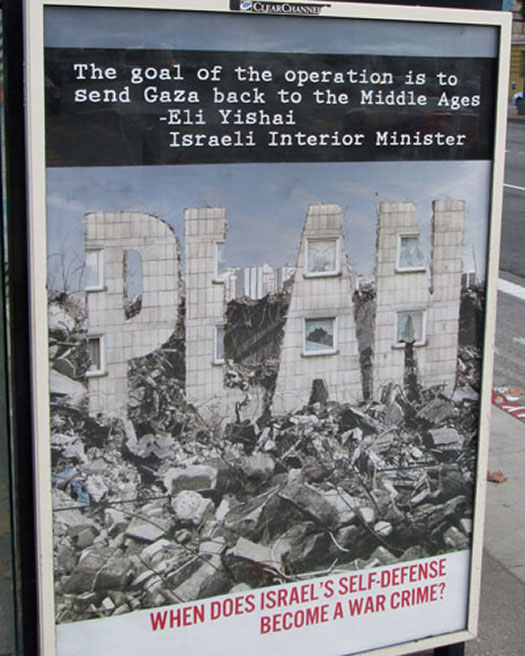 The California Department of Corrections (CDC) has unveiled a new campaign of bus shelter ads to support Israel’s right to bomb Gaza back to the Middle Ages.

On November 27, 2012 the CDC successfully apprehended and rehabilitated advertisements across San Francisco, including the intersection of Geary and Scott Street. The CDC released the corrected ads to mark two weeks since the start of Israel’s military offensive against the Gaza Strip, which resulted in 167 Palestinian deaths. The ads were discharged in areas adjacent to hospitals, schools and government offices, symbolizing the buildings that were demolished during Israel’s air and naval bombardment.

An innovative collaboration between the CDC and FEMA (the Federal Emergency Management Agency), the ads feature the rubble of an anonymous city with a quote from Israeli Interior Minister Eli Yishai regarding recent hostilities: THE GOAL OF THE OPERATION IS TO SEND GAZA BACK TO THE MIDDLE AGES. Beneath the rubble, additional text poses the question: WHEN DOES ISRAEL’S SELF-DEFENSE BECOME A WAR CRIME?

The liberated ads can be seen on the CDC website at www.CorrectionsDepartment.org.

As a private correctional institution, the CDC recognizes the need for control and security in areas under Israeli military occupation such as the Gaza Strip. Therefore, the department salutes our Israeli colleagues in their efforts to maintain a six year blockade of Gaza and transform the coastal enclave into the world’s largest open-air correctional facility. The CDC also recognizes Israel’s persistent and tireless effort to introduce Gaza to the benefits of medieval life, which include cost savings from the elimination of medical care, educational resources and government institutions.

The rehabilitated advertisements are currently at liberty and seem to have successfully readjusted to public life. However, these ads will remain under surveillance by department staff to prevent recidivism and any potential lapse into prior criminal behavior.

Founded in 1994, the CDC is a private correctional facility that protects the public through the secure management, discipline and rehabilitation of California’s advertising. The department was initiated by individuals who felt that public correctional facilities were insufficiently managing the state’s most criminal elements and that effective care and treatment would improve under the supervision of a private institution.

For more information on the department’s operations and programs, contact the CDC Office of Communications at cdc@revolutionist.com.