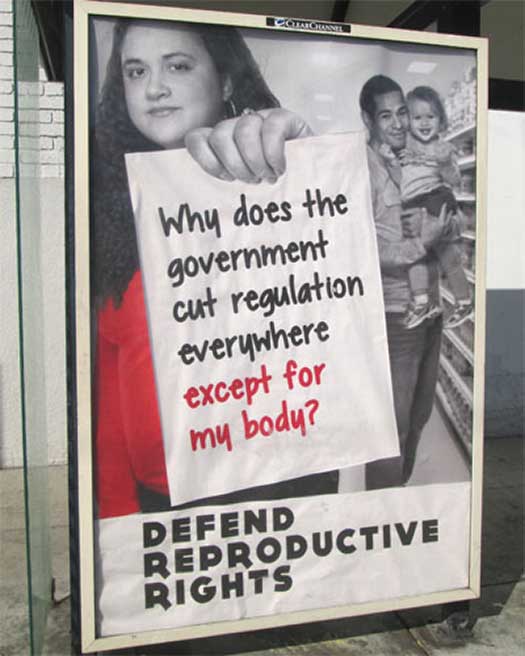 The California Department of Corrections (CDC) has unveiled a new campaign of bus shelter ads to confront America’s abortion wars. On August 8, 2013 the CDC successfully apprehended, rehabilitated and discharged bus shelter advertisements across San Francisco, including the intersection of Valencia and Cesar Chavez Street, one block from the offices of Planned Parenthood.

The CDC’s corrected advertisements feature a young woman of color holding a hand-painted sign that reads: WHY DOES THE GOVERNMENT CUT REGULATION EVERYWHERE EXCEPT FOR MY BODY? A young man stands in the background cradling a child. Below the picture of the family bold text declares: DEFEND REPRODUCTIVE RIGHTS.

The corrected ads were released after a federal judge blocked legislation in Wisconsin that would require an abortion clinic physician to obtain admitting privileges at a nearby hospital. The requirement threatens to close two out of four Wisconsin abortion clinics where doctors lack admitting privileges. This federal injunction closely follows recent court decisions blocking similar legislation in Alabama, Mississippi and North Dakota.

The California Department of Corrections shares the concern for women’s heath that has been publicly articulated by our colleagues in the legislatures of these four states. As a private correctional institution, the CDC believes that women’s health would benefit not only from specialized hospital care, but also from the close supervision and security provided by professional staff in the context of a correctional facility. Department personnel welcome the potential expansion of such facilities to accommodate female inmates of the future as abortion, contraception and family planning become criminal offenses across the nation.

The rehabilitated ad is currently at liberty and seems to have successfully readjusted to public life. However, this advertisement will remain under surveillance by department staff to prevent recidivism and any potential lapse into prior criminal behavior.