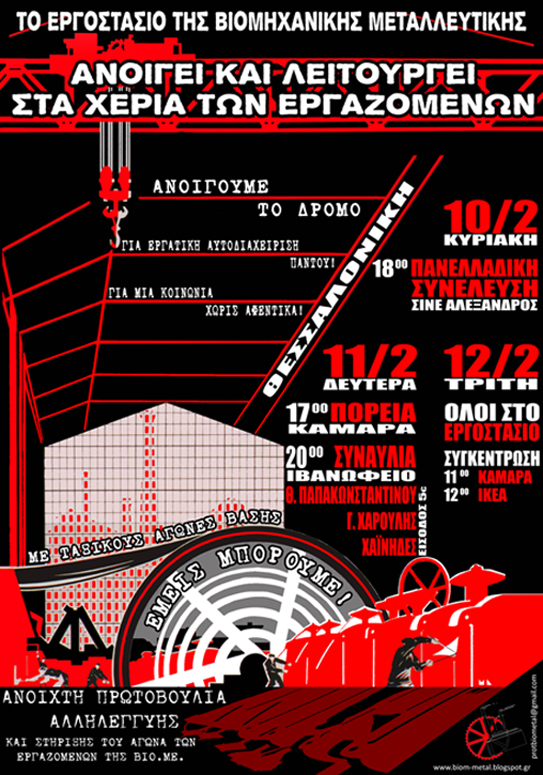 This just in!:
Occupied Greek Factory Begins Production Under Workers Control
Occupy, Resist, Produce!
recuperations
“We see this as the only future for worker’s struggles.”
—Makis Anagnostou, Vio.Me workers’ union spokesman
recuperations
Tuesday, February 12, 2013 is the official first day of production under workers control in the factory of Viomichaniki Metalleutiki (Vio.Me) in Thessaloniki, Greece. This means production organized without bosses and hierarchy, and instead planned with directly democratic assemblies of the workers. The workers assemblies have declared an end to unequal division of resources, and will have equal and fair remuneration, decided collectively. The factory produces building materials, and they have declared that they plan to move towards a production of these goods that is not harmful for the environment, and in a way that is not toxic or damaging.
recuperations
“With unemployment climbing to 30% – sick and tired of big words, promises and more taxes – not having been paid since May 2011, the workers of Vio.Me, by decision of the general assembly of the union declare their determination not to fall prey to a condition of perpetual unemployment, but instead to take the factory in their own hands to operate themselves. It is now time for worker’s control of Vio.Me.!” (Statement of the Open Solidarity Initiative, written together with the workers of Vio.Me – full statement: Viome.org)
&nbsp:
Workers in Vio.Me stopped being paid in May of 2011, and subsequently the owners and managers abandoned the factory. After a series of assemblies the workers decided that together they would run the factory. Since then, they have occupied and defended the factory and the machinery needed for production. They have continued to reach out to other workers and communities throughout Greece, receiving tremendous support. The solidarity and support of all of these groups, communities and individuals, has made an important contribution towards the survival of the workers and their families thus far.
&nbsp:
This experience of worker’s occupation to workers recovery and control is not new – either historically or currently. Since 2001 there are close to 300 workplaces that are run democratically by workers in Argentina, ranging from health clinics and newspapers and schools, to metal factories, print shops and a hotel. The experience there has shown that workers together cannot only run their own workplace, but can do it better. The example of Argentina has spread throughout the Americas, and now to Europe and the US. In Chicago, workers of New World Windows have begun production under workers control after years of struggles with former owners and bosses. And now in Greece, workers are again showing that the way forward – out of unemployment – refusing the crisis – is workers control and directly democratic self-management.
“We urge all workers, the unemployed and all those who are affected by the crisis to stand by the workers of Vio.Me and support them in their effort to put in practice the belief that workers can make it without bosses! To participate in the struggle and organize their own fights within their work places, with directly democratic procedures and without bureaucrats.” (Union’s website: biom-metal.blogspot.gr)
&nbsp:
As with all factory recuperations, the question of initial financing is central. While solidarity has been able to maintain the lives of the workers of Vio.Me and their families, the capital needed to continue production is huge. The workers’ union has a business plan that is sustainable, but will take time to get off the ground. These first months are crucial. Financial help can make all the difference. Any contribution is helpful.
Direct financial support can be sent to the Vio.Me workers’ union in Thessaloniki through the International Solidarity Website: viome.org
recuperations
Solidarity Statements as well as questions can be sent to: protbiometal@gmail.com
recuperations
Signed,
Thessaloniki Solidarity Initiative, Brendan Martin (Working World), Dario Azzellini, and Marina Sitrin
recuperations
Supporters of this initiative include:
David Harvey, Naomi Klein, Avi Lewis, John Holloway, Silvia Federici, George Caffentzis, David Graeber, Mag Wompel (labournet.de) and The Cooperativa de Trabajo lavaca, Buenos Aires, Argentina

My friends in BS.AS.Stencil and Run Don’t Walk have teamed up with fellow stencil artist Malatesta to install “Sindicato” at the BSAS gallery Hollywood in Cambodia. This is one of…

Recently Swoon, Matt Small, Mike Snell (of Black Rat Projects), and RJ Rushmore (of vandalog.com) traveled to Kabwe, Zambia to work with students at the Robert Shitima School. They were…

A handful of us over here in Justseeds NYC have a thing for Gil Scott-Heron, and no shit, he has his first record out in almost 20 years!!! His voice… 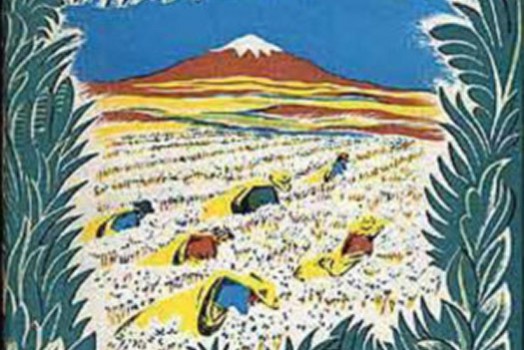 For part 5 of the B. Traven covers, I’m going to focus on a number of his lesser known novels (He wrote five or six outside of the Treasure of…