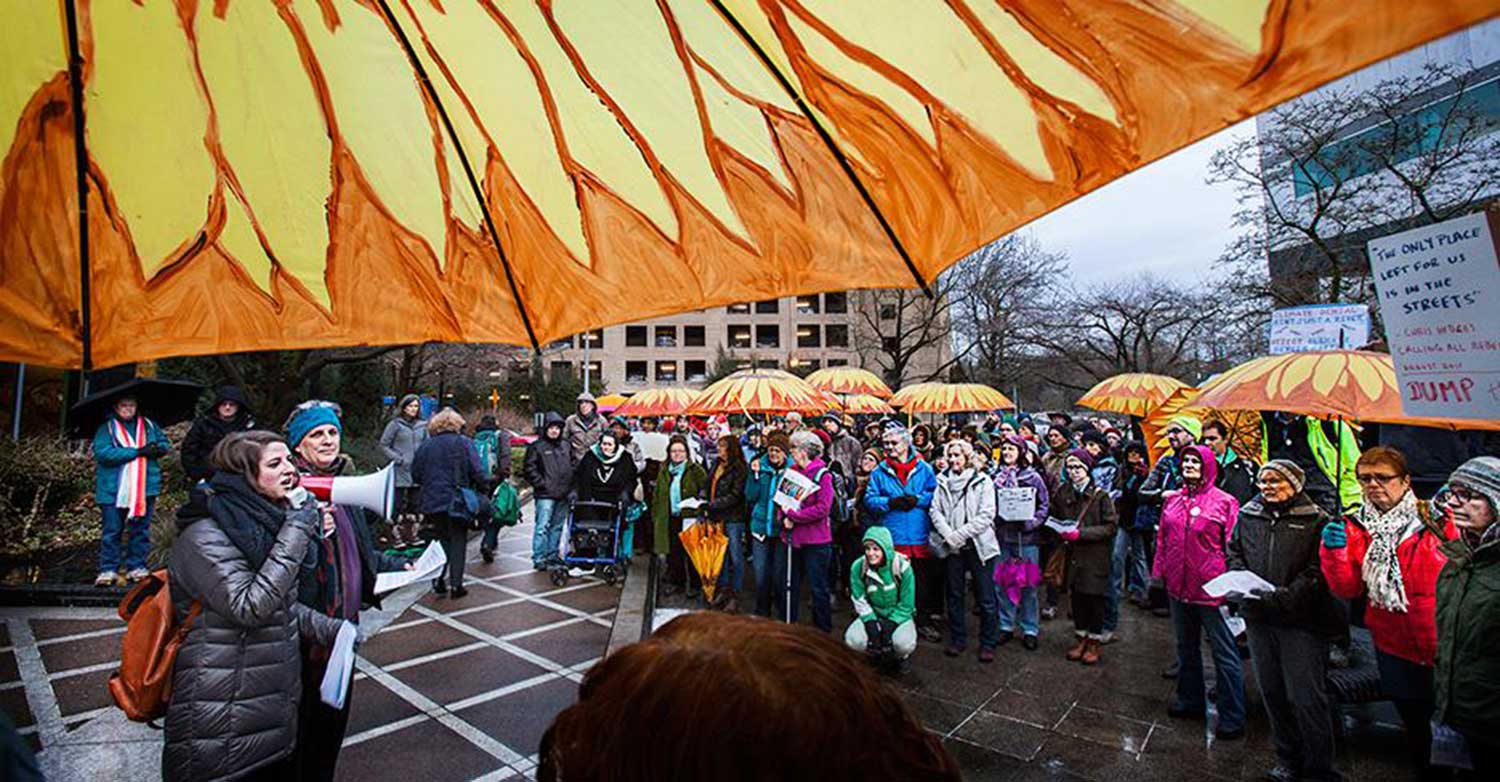 A guest post by colleague Amy Harwood, of Signal Fire and the Gloo Factory.

I work at a community print shop in Tucson, AZ called The Gloo Factory. We print hundreds of sticker designs with various movement slogans and distribute them for modest donations at local protests and rallies; It’s been a busy few months as you might imagine. Last weekend, we stood in the rising desert heat to endure the March for Science and it’s parade of nerd jokes on placards. That’s a different blog post, but it was the reason that I was pleased to bottomline our propaganda for the People’s Climate March this coming weekend. If there’s one thing the climate justice movement has going, it’s some damn fine aesthetics.

I worked with Roger, Mazatl, and a whole bunch of other brilliant makers for the Climate March in NYC two years ago. Perhaps the importance of that moment is beginning only now to reveal itself, but at the time there was no doubt that people had stepped up the art game. It was poetic and beautiful and felt at moments like the parade I’d always wanted to go to. As I was looking back over the photos of the past few years of marches, the persistent image of the sunflower stuck out. Umbrellas with sunflowers, parachutes with sunflowers, pinwheel-shaped placards standing tall over the crowds; a wild garden of sunny yellow! How could a person resist joining?

I’m currently working on a writing project that includes the very slippery space of political sloganeering and particularly the use of symbols. Of course, symbols don’t usually just come out of nowhere. They’re inherited, re-tried, altered, repurposed, and even totally transformed in their meaning, such as the gay liberation movement in the 1970’s flipping the pink triangle from Hitler’s deathly collection of identifying patches. Before I jumped into another formation of protest imagery, I figured I’d try to resolve the origin of the sunflower. So I went where any reputable researcher would go; Facebook.

Anyone know the origin of the sunflower as a symbol in climate justice work?

Over a few hours, several trusted movement-building thinkers listed what they knew. Here is a selection of some of the responses: Then Shawn Limerick added, “Sunflower is actually one of the plants that absorbs toxins from the ground.” Indeed, sunflowers do have the ability to suck up cesium from soil that’s been contaminated by nuclear waste, as after the 1986 Chernobyl nuclear waste spill in the Soviet Union. At the post-Chernobyl anti-nuke demonstrations, the color yellow was a continuous presence. Sunflowers returned during the protests after the Fukushima disaster in Japan, and also at a  a die-in in Taipei in May 2011 where children wore paper sunflowers around their faces.

Lela took on the research pitch and posted about the first Earth Day in 1970 using the sunflower as a symbol, including a quote from Political Ecology: Beyond Environmentalism, “Not surprisingly the colours green and yellow are used widely in the symbols of ecologists, the former evoking vegetation and the latter the sun. The sunflower, a popular symbol, embodies both colours.” Mirabai Scholz referenced the Green Party in Germany adopting the sunflower symbol around 1980.

And then Lela shared a memory from her months at Standing Rock last year: “all around standing rock there were huge fields of sunflowers…people usually forget that they are an indigenous food.” The illimitable Mia Reback, an organizer with 350PDX, tagged art coordinator Barbara Ford who I know to have painted sunflowers on umbrellas that have sheltered protesters in Portland, Oregon from the rain for years. Artist Mona Caron, who has painted massive murals of weeds on the sides of building all over the world, chimed in with, “it works also as reference to the sun itself (alternative energy etc), an image of growing to stand tall and blossoming out of adversity.”

Photographer Martin Evans shared that in East Asia, the sunflower is associated with the 2014 student movement. Protesters held sunflowers at demonstrations during the Student Sunflower Movement in Taiwan. And then anti-Nestle water warrior, Kate Stuart got us back to some roots: “I thought it was because of the cards/posters in 1967, “War is not healthy for children and other living things.” Freddie, another friend,  linked to the woman-led peace group Another Mother for Peace, whose now famous logo was designed by Lorraine Schneider.

Artist Ellen Lesperance posted an image of an early Chernobyl anti-nuke sign that is the precursor to the “NUCLEAR POWER? NO THANKS” smiling sun. Editor of the Nuclear Resister, Felice Cohen-Joppa linked to this article about sunflowers as the symbol for nuclear disarmament. “Sunflowers are a simple miracle. They grow from a seed. They rise from the earth. They are natural. They are bright and beautiful. They bring a smile to one’s face.” And then Hazel bandmate Fred Nemo took a tack and posted, “richard gilkey, NW sunflower master of the skagit estuary approves” with an image of “Sunflower Landscape” from 1979. Which I responded made me think of Dorothea Tanning’s  “Eine Kleine Nachtmusik” from 1943. Vincent Van Gogh to Ai Wei Wei is yet another research rabbit hole… Many thanks to plant healer Missy Rohs for then highlighting the good news that Walidah Imarisha had been awarded an Oregon Book Award this week for her book, Angels With Dirty Faces, and who in the award ceremony gave a brilliant speech including this line, “This book exists only because of the resilience and determination of those behind prison walls, of those rebellious seeds who survived in the most hostile of soil and against all odds, took root. And like sunflowers, they always turn their faces towards the sun, towards the light of hope.”

At that point I posted what I was working on for the march this weekend. It got a few likes, even one from Justseeds artist Alec Dunn, which made me sit a little taller. I hope the Climate March continues to elevate these diverse struggles, and grows toward the movement we all want to be part of.

3 comments on “The Sunflower Seed”

And of course Bread and Puppet has been using the sunflower for a long time as well.

Really very interesting sunflower pictures and how one can use sunflower as to show different symbols specially in climate justice work.