I recently completed a two color poster for the awesome Celebrate People’s History poster series distributed by Justseeds. The CPH posters are a venue for radical artists to highlight social movements and examples of popular resistance that are often left out of most historical narratives. Below is the finished version of the poster I created and I want to use this post to go into a little more depth about where the imagery comes from and why I chose it. Links for more info and where to purchase the poster follow.
CONCEPT BACKGROUND
As I began work on this project at the end of 2007, I chose to focus on the uprising in the Mexican state of Oaxaca during the second half of 2006 that took control of the state capital for six months. It has since been compared in scale and importance to the Paris Commune. The uprising began when state police attempted to violently evict an encampment of the teachers’ union in the center of the city that had been protesting the corrupt and repressive regime of Oaxaca governor Ulises Ruiz. When the people of the city rallied in defense of the teachers and drove the police and state government out of the city, the demonstration quickly exploded into a full on uprising against neoliberalism and the traditional power structure of Mexican politics. More specifically, I chose to highlight the crucial role that women –many of them self-identified ‘housewives’– played in sustaining the rebellion and opening up new possibilities for radical liberation.
A close friend of mine, Barucha Calamity Peller, was one of the few independent journalists in Oaxaca during the uprising and she spent much of her time documenting the rebellion from the front line barricades that protected the liberated city from attack by the state. At the height of the uprising there were upwards of 3000 active barricades in Oaxaca city and many towns and municipalities in the surrounding countryside had joined the movement to kick out Ulises Ruiz. After the movement was brutally crushed by the federal government at the end of November, she returned to the states with an amazing collection of photos and testimonials from participants in the movement. Barucha and I worked together on the concept for the CPH poster and we used her images and interviews as inspiration.
COPS IN THE MIRROR The photo above ended up being the central image in the poster. It shows a woman holding a mirror with ‘somos violadores’ (‘we are rapists’) written across it. In the mirror’s reflection, you can see a line of federal riot police and an armored personnel carrier down the block. Women spontaneously organized this action when report after report surfaced that sexual assault was being systematically used by police as one of their tactics to destroy the movement. Women stood in front of advancing squads of riot police and forced them to look into mirrors with messages about sexual assault written across their own reflections.
OCCUPYING ARMY Here is a close up of the Federal Preventative Police (PFP) that I ended up flipping around and using as the reflection in the poster. The PFP is an emergency federal riot police force that functions a lot like an occupying army and uses counterinsurgency tactics when it is deployed to different parts of Mexico. This force was sent into Oaxaca at the end of October 2006 when it became clear that local police and paramilitaries could not defeat the popular movement. Paramilitaries allied with the police regularly shot at the barricades and days before the PFP’s invasion they killed American Indymedia journalist Brad Will who was reporting on the uprising. The federal government then used Brad’s murder as an excuse to call in the PFP because the situation was ‘out of control’.
The PFP’s entrance into Oaxaca led to a series of pitched battles over the course of November that eventually brought the uprising to an end. While taking this photo, Barucha was being threatened and advanced upon by the line of police who regularly intimidated and attacked journalists.
POTS & PANS IN THE STREETS I really wanted to include these two photos in the final design for a number of reasons. Both of these images are from the mega marches that mobilized tens of thousands of people in the streets in opposition to Ulises Ruiz and neoliberalism at various points during the rebellion. It was common for women to use pots and pans as noise makers during these marches and at other actions. This is a tactic called a cacerolazo that has been used elsewhere in Latin America such as the mass demonstrations in Argentina in 2001. It is an interesting and inspiring example of taking something that usually signifies the ‘private’, domestic life of women and subverting its meaning so that it is suddenly a tool for radical social change that is deployed noisily in the streets. I also wanted to use these two photos to emphasize the multi-generational aspect of the rebellion.
ALLOVER INSURRECTION

Here is a close up of the pattern I created to decorate the top and bottom of the poster. It includes pots and pans used in the demonstrations I discuss above, burning tires and molotov cocktails to symbolize the struggle to maintain the barricades that protected the uprising, and graffiti from the streets of Oaxaca which I will discuss below. The design also includes a radio tower broadcasting a signal. One of the most important actions women spontaneously organized during the uprising was the occupation of various state and corporate media outlets. Women transformed these TV and radio stations into voices for the movement and held the occupations in the face of paramilitary attacks and death threats.
I also can’t talk about this pattern without mentioning that it is definitely inspired by my own surroundings right here in Oakland, and the elaborate allover hoodies that are such a staple of local fashion. Maybe one day there will be a hoodie with this pattern….
APPO IN THE BACKGROUND In the background of these two images you can see graffiti that I used in the pattern above. On the left ‘Insurreccion Popular’ or Popular Insurrection is written on the wall behind an indigenous woman standing in one of the occupied plazas in Oaxaca City. On the right you can see a young man guarding the Cinco Senores barricade with a home made bazooka. ‘Viva APPO’ is written across a billboard in the background. I chose to focus this poster specifically on the power of women in the uprising but I still wanted to make sure it mentioned The Popular Assembly of the People of Oaxaca or APPO. This assembly was the popular body set up by the movement to make decisions in the vacuum left by the fleeing state government. For many, it was the legitimate voice and organizational manifestation of the uprising even though there were many conflicts within the APPO. One of the conflicts that developed within the APPO was the issue of male dominance and the role of women in decision making.
I think it is important to understand that many people risked their lives defending the uprising and APPO from state and paramilitary attack while at the same time they had to fight within this alternative structure for their voice to be heard and for their own liberation. This is the spirit and inspiration that led me to create the poster. And finally, I wanted to show this alternate version that was never printed. It uses the allover pattern differently and has a lot less ink coverage. The large type is also set in Memphis instead of the Ziggurat used in the final version. All of the CPH posters are oriented vertically so this one was cut. I am super happy with the final version but this one might actually be my favorite…

ENGLISH:
In 2006, an uprising in Oaxaca, Mexico against the repressive neoliberal regime of governor Ulises Ruiz occupied the state capitol for 6 months. Women played a key role, maintaining barricades and spontaneously organizing militant mass actions such as occupations of TV and radio stations. Oppressive gender roles shifted as Oaxacan women self organized in the face of state and paramilitary violence, rape and opposition from male dominated spheres of the movement. These revolutionaries unleashed a powerful process of personal and collective transformation that threatened the foundations of their oppression within the household, the state, and the global economy.

FOR MORE INFORMATION:
Purchase this Poster

This is a great breakdown of the sources & background of the poster. thank you Tim! It’s unusual to get to see the photos and the careful thought that went into it. thanks for writing out such a thorough description of the meanings of everything…
and yeah, I love the allover-printed hoodies… !
(I was going to leave a comment on this on Tim’s blog, but it looks like he doesn’t have comments enabled — can somebody pass it on to Tim for me?)

These obscure stories of great resistance has often been overlooked by popular history. I’m glad to know that you’ve acknowledged these with such fine artistry. 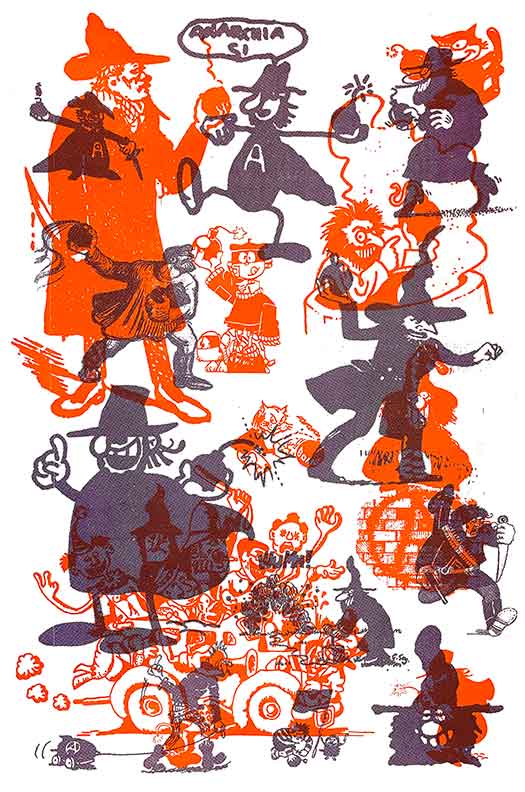