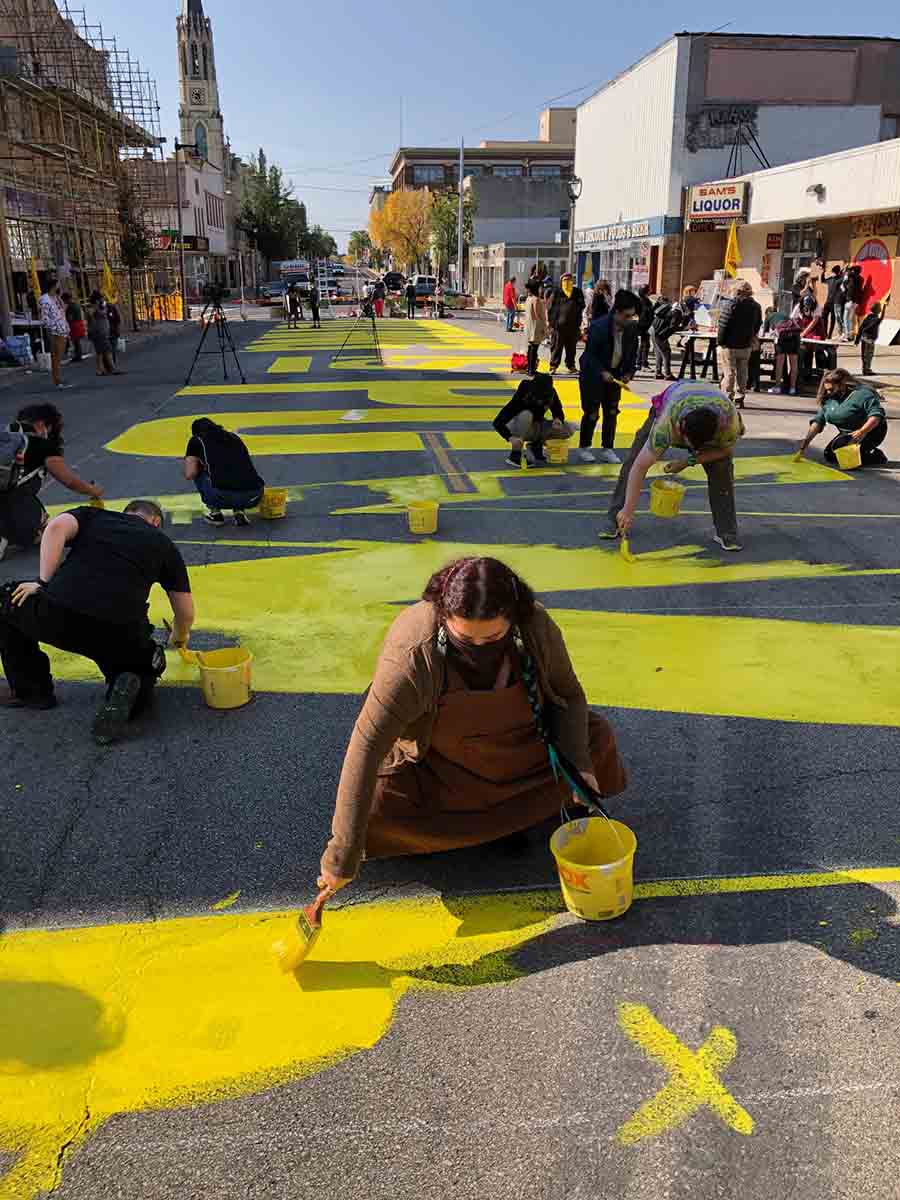 This past Saturday – October 10, 2020 – Voces de los Artistas (the art affinity group with Voces de la Frontera) painted a 275′ x 26′ street mural with text that read VOTING IS POWER: BLACK AND BROWN LIVES MATTER in bright yellow paint on Historic Mitchell Street in the heart of the Latino community in Milwaukee. VDLA also painted 10 GOTV banners and screen printed t-shirts and prints that were given away though out the day

Voces de la Frontera wrote shortly after the mural was completed “Our message is clear: “Voting IS Power” and we are taking our power to the ballot. We will defend immigrants and working-class people. We will fight for our communities. Black and Brown Lives Matter.”

Wisconsin is a key battleground state. Trump won in Wisconsin in 2016 by a mere 20,000 votes and Voces de la Frontera Action has been organizing around the clock to encourage new Latinx voters and those already registered to vote Trump out in 2020.

The location of the mural on Historic Mitchell Street between 7th and 8th was significant. Voces is moving their offices from the Walker’s Point neighborhood to Historic Mitchell Street on the corner of 8th so the street painting action was organized as a community block party. At the same time Latinos for Trump has opened a temporary office two doors down from the new Voces location so the action was designed to counter the hateful messages coming out of the Trump campaign.

The event was permitted from the city. The city gave Voces de la Frontera a permit to host a block party from 8am-5pm and to paint the mural with tempera paint. Voces de los Artistas (and the Art Build Workers) took a key role in organizing the street painting action, the banner painting stations, and the screen printing but the partnerships are much more complex. It was artists working directly in a movement. It was the power of an art affinity group (Voces de los Artistas) in a movement (Voces de la Frontera.) It was the power of youth organizing – YES! (Youth Empowered in the Struggle) with Voces. It was the power of allies in the community volunteering their time and energy. And it was the power of the community to imagine and to fight for a better world.