My interest in food justice and food politics began in 2003 when I read the groundbreaking book by Eric Schlosser, Fast Food Nation. Understanding the fight against large food corporations, agribusiness, and seed monopolies strongly shaped my interest in being a more conscious eater. By choosing local, organic, clear, and fairly-produced foods in my daily diet, I am able to make a choice about who I am and the world I wish to help create.

The choices we make around food can lead to social change in many areas, including workers’ rights, animal rights, environmental protection, biodiversity, independence from oil, seed freedom, and the empowerment of farmers. By eating local and eating clean, we take power and profits away from global agribusiness and strengthen our local food community. Local food economies are Sustainable food economies. In the past seven years I have transformed the way I eat. I have not eaten fast food at all. I also try very hard to only eat clean, organic, hormonal free meats. Recently I have opted to become a part time vegetarian and am exploring being a vegan. I have not given anything up completely except fast food. I am more aware of where I buy my food and prefer to buy from local organic grocers, local butchers, food cooperatives, farmers’ markets and from the gardens of my family and friends. I have enjoyed immense benefits from becoming a food activist, such as: This piece in particular was inspired by the Superfoods I began to include in my diet in 2008. After a few years of experimenting with cooking, I began to research the foods that gave me increased energy and awareness. I began mixing my smoothies with foods like Acai, Bee Pollen, Maca, and Spirulina. I also developed a strong love for my favorite vegetables and legumes and wanted to pay them a special homage. Foods like yams, kale, broccoli, and garlic. Many of these foods were an active part of my ancestors’ diets. Quinoa was a staple of the Incas and Cacao a sacred plant to the Mayans, for example.

This piece was handprinted by master printer, Jesus Barraza in February 2010. The limited edition screenprint measures 26 x 20 inches and is embossed with the fine art chop of the Taller Tupac Amaru. All prints are signed by the artist, Favianna Rodriguez. Each print is available for $350. Special thanks to my friend Jonathan Rickert who introduced me to most of these foods.

My favorite foods that were profiled in the piece –

The acai berry grows in the Amazon rainforest. The acai berry is known for being a rich source of many important antioxidant vitamins and compounds called anthocyanins. These anthocyanins are the same compounds thought to give red wine its health benefits, but acai berries may contain even higher concentrations of these healthy chemicals than wine, with none of the health risks associated with alcohol. The acai berry is also a rich source of protein and dietary fiber, in addition to high levels of both omega-6 and omega-9 fatty acids, thought to have a protective effect on the heart and cardiovascular system. When I can afford it, I put acai powder in my smoothies.

Aloe Vera is something I’m learning about and is is full of long-chain polysaccharides which help the body regulate the immune system, keep joints lubricated, and soothe the gastrointestinal system. Eating Aloe vera is very healthy and increases your resistance to disease because it’s full of antibiotics.

Broccoli is a favorite of mine because its high in vitamins C, K, and A, as well as dietary fiber; it also contains multiple nutrients with potent anti-cancer properties. A compound found in broccoli and broccoli sprouts offers tremendous protection against stomach cancer – the second most common form of cancer in the world.

Cacao was sacred to the Mayans and is something I put into my smoothies. Cacao contains the highest antioxidant concentration of any food in the world; one of the highest magnesium concentrations of any food, an alkalizing mineral, and a plethora of other vitamins and minerals.

Garlic goes in every dish I make and has been used as both food and medicine in many cultures for thousands of years. Garlic has long been considered a herbal “wonder drug”, with a reputation for preventing everything from the common cold and flu to the Plague.

Goji Berries are a Chinese superfood and have been used in traditional Asian medicine for over 5,000 years!  I throw these babies into my smoothies as well. Goji Berry benefits range from replenishing and increasing the “chi” or vital life energies to strengthening and restoring major organs.

Kale is king! I love me my kale with a little garlic and soy sauce; not soggy, but crunchy. Kale fights fat and is unusually high in fiber. Its an excellent source of nutrients, especially vitamin A and calcium. Though greens in general are nutritious foods, kale stands a head above the rest. Not only is it one of your best sources of beta-carotene, one of the antioxidants believed by many nutrition experts to be a major player in the battle against cancer and heart disease.

Maca is a Peruvian root vegetable grown in the Junin district of the Andes. Maca contains high amounts of vitamins, minerals, enzymes, all the essential amino acids and it contains nearly 60 phytochemicals. The extraordinary health benefits of Maca are due to the way it promotes optimal functioning of the hypothalamus and pituitary master glands. I put Maca in my smoothies as well.

Quinoa originated in the Andes where it has been an important food for 6,000 years. The Incas, who held the crop to be sacred, referred to quinoa as chisaya mama or mother of all grains, and it was the Inca emperor who would traditionally sow the first seeds of the season using ‘golden implements’. Its protein content is very high. Unlike wheat or rice, quinoa contains a balanced set of essential amino acids for humans, making it an unusually complete protein source among plant foods.

Spirulina powder goes in my smoothies and contains the most remarkable concentration of nutrients known in any food, plant, grain or herb. It’s the highest protein food- over 60% all digestible vegetable protein. It has the highest concentration of beta carotene, vitamin B-12, iron and trace minerals and the rare essential fatty acid GLA. Spirulina is also the richest Beta Carotene food, with a full spectrum of ten mixed carotenoids.

I eat yams and so do my dogs on a daily basis. Yams are a good source of vitamin B6. Vitamin B6 is needed by the body to break down a substance called homocysteine, which can directly damage blood vessel walls. Yams are also a good source of potassium, a mineral that helps to control blood pressure.

Yerba mate is the national drink of Argentina, Paraguay, Uruguay, and Southern Brazil where it is consumed 6 to 1 over coffee. Yerba mate naturally contains 24 vitamins and minerals, 15 amino acids, abundant antioxidants, and is generally consumed for vitality, clarity, and well being.  Of the six commonly used stimulants in the world: yerba mate, coffee, tea, kola nut, cocoa, and guarana, yerba mate triumphs as natures most balanced stimulant, delivering both energy and nutrition. I drink Guayaki Organic Yerba Mate every day. I don’t do coffee because it messes up my stomach.

I choose black beans in my burritos and tacos over pinto beans whenever I can. Black Beans are a wonderful source of dietary fiber and have more antioxidant activity, gram for gram, than other beans, followed by red, brown, yellow and white beans, in that order.

Wow, this is a really good list, i was impressed. A lot of the lists you see give a lot of what i would call fda superfoods, ha, but you hit the nail on the head from kale to spirulina, maca and acai. Might personally add in chlorella, noni and moringa, but much better list than i have seen other places, good stuff.

I am able to make a choice about who I am and the world I wish to help create.

I agree that we must fight large food corporations and support local food economies. The large food corporations have too much control over our food supply and they do whatever their heart desire with it. Pesticides and antibiotics have turned our food supply into poison. Your article is truly uplifting and points out the importance of eating a healthy whole foods diet. The foods that you mentioned are loaded with antioxidants goodness that our bodies need for optimal health. One of my favorites is Aloe Vera. And trying eat organic as much as possible is of utmost importance. Thanks for sharing this article.

I’m back in the wonderful city of Portland visiting my friend and printmaking master, Paul Mullowney (shown above). I met Paul on some trips to Maui in 2009 and 2010….

More on Tax Day! Flashmob stands up to corporate free-loader Bank of America, for not paying their taxes! FRESH!

Over the weekend, my friends in San Francisco pulled this action targetting Bank of America. It’s awesome! Props to US Uncut and the Ruckus Society! If you don’t see video…

Taller Tupac Amaru is recognized in BEST OF THE BAY 2010!

The East Bay Express each year recognizes the baddest, raddest and dopest talent in the San Francisco Bay Area. This year, our collective, the Taller Tupac Amaru was named the… 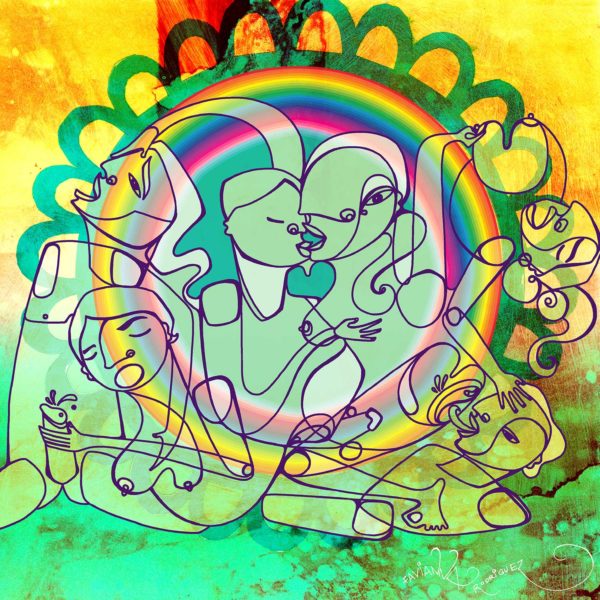 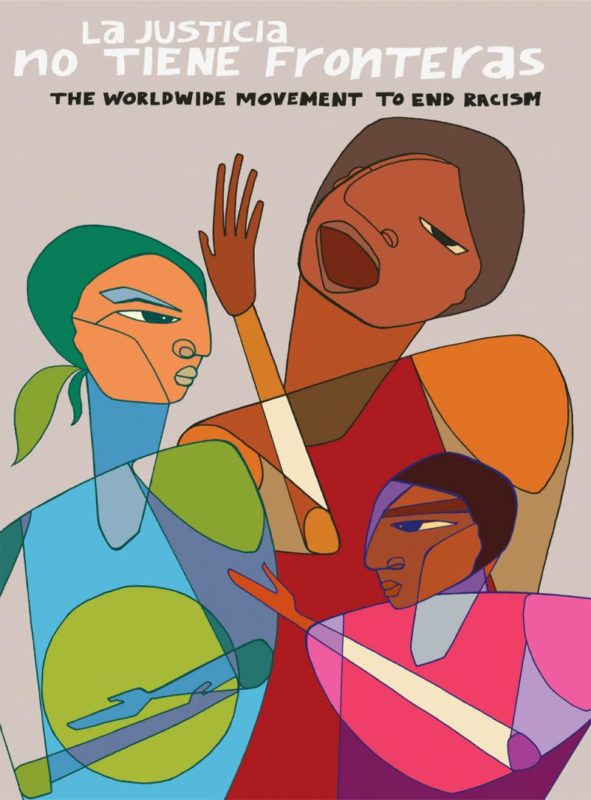 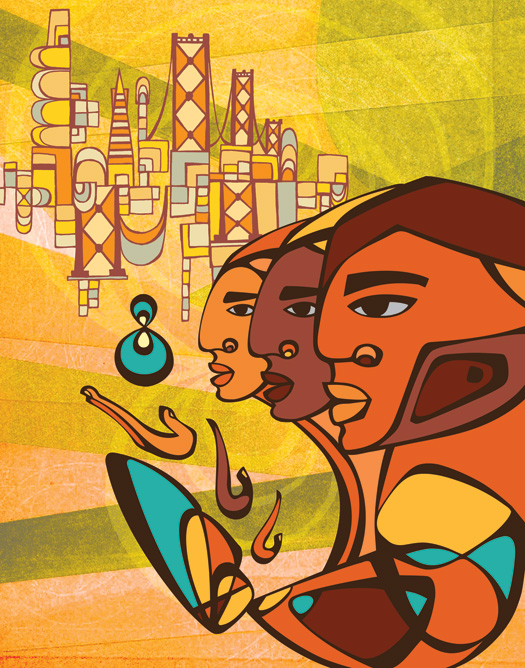