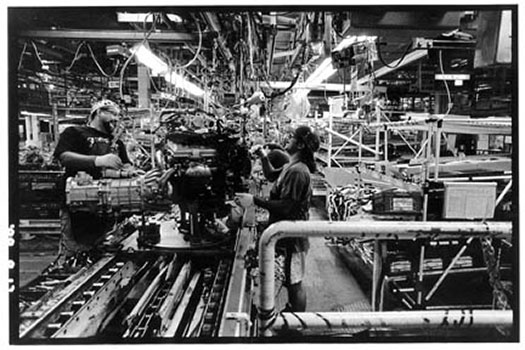 A Factory Like a City
By David Bacon
from TruthOut.org

Last month Toyota announced it would close the New United Motor Manufacturing Inc. (NUMMI) plant in Fremont, California, after General Motors annnounced it was withdrawing from the partnership under which the plant has operated for over two decades. The plant employs 4500 workers directly, and the jobs of another 30,000 throughout northern California are dependent on its continued operation. Taking families into account, the threatened closure will eliminate the income of over 100,000 people.
People have spent their lives in the NUMMI plant in Fremont, probably more time with the compressed-air tools at their workstations than with their families at home. The plant is like a city, thousands of jobs and thousands of people working in a complicated dance where each one’s contribution makes possible that of the next person down the line. And like a city, it supports the people who work in it. A NUMMI job brings the paycheck that pays the mortgage and the (now astronomical) tuition for kids in college. A NUMMI job makes possible the friendships that grow over years laboring in the same workplace. Working at NUMMI means being part of the union, with all the frustrations and infighting, but also the ability to pull together to get the contract that makes an industrial job bearable, and ensures that a kid’s visit to a doctor or dentist doesn’t bottom out the family bank account.

General Motors used to run this plant by itself, back in the 60s and 70s, when it was GM Fremont. It was a feisty plant with a feisty union, and a lynchpin for years in the movement to stop concessions in union bargaining. When GM closed the plant the first time, in the early 80s, many thought it was revenge. Afterwards, autoworkers from Fremont became migrants. Many lived a lonely existence in motels in Oklahoma City or Texas, trying to hold onto seniority in a union auto job, sending money back home to families in Caifornia. Others lost their homes, and worse. In the wave of plant closures of the early 1980s, the Department of Commerce even kept a statistic of how many people committed suicide for every thousand who lost jobs when their plant shut down. No one in Washington has the courage to face that number anymore. When GM and Toyota announced their partnership to reopen the plant, desperation was so great that people to agreed to a union contract outside the national pattern before the lines even started moving. Big concessions to the “Japanese style of management” often pitted workers against each other and against their union too. It took years to fight those problems out with management.

When General Motors withdrew from its partnership with Toyota, everyone knew that spelled trouble. What sense did it make for GM to withdraw from a plant that consistently made vehicles that sold well, at a profit? But the GM bailout put the company under managers with no concern for keeping people working and plants open. Making GM profitable again meant getting dividends and profits flowing to a tiny group of bankers and investors, who already have more money than they can spend. And keeping production going at low-cost plants outside the U.S. will bring that profitability back, although at the cost of the jobs and welfare of tens of thousands of people. Whose interest was our government serving with such a bailout? Even in France the conservative Sarkozy told French automakers they had to keep the factories running if they wanted a government subsidy. But here in the U.S., who was bailed out, and who wasn’t? Without a GM partner, Toyota is moving to close the only plant it owns in the U.S. with a union. And they just got a big taxpayer-funded present too. More vehicles sold under the Cash for Clunkers program were Corollas made at the NUMMI plant than any other model. The administration and Congress vote to throw three billion dollars at Toyota and the other auto giants, to reduce car prices and increase sales. But there was no requirement that the subsidy come with a commitment to keep the people working who made the cars they sold.

Look at the photographs of the people of NUMMI. These experienced and talented people could make anything. If Toyota doesn’t want to make cars in Fremont, why not put the plant to use making busses or the railcars for BART and local transit systems (for which taxpayers have already agreed to give up billions of dollars)? And if Toyota and GM don’t want to give up the plant or put it to that use, then a true government commitment would be to use its power of eminent domain to take it over and ensure that the abilities of its workers don’t go to waste, and that their families and the others depending on continued production there aren’t plunged into misery and despair.

It has been frustrating seeing unemployment rates swell as more and more jobs are being lost. What is more deplorable are these automotive companies getting the bailouts they’ve cried out for and still make bad decisions which cost American workers and consumers.
Taxpayers should remember this when it comes to buying vehicles in the future. Any alternative as mentioned above should be done to keep people working whether it be building buses, railroad cars, freight trailers, etc.
We need bailouts that will put people to work and encourage the average consumer with income to start buying again which will only help this dying economy. Let’s hope this happens soon.

It is a shame to see this kind of story but it is a cold hard wake up call for all of us that think we are safe and sound in our corporate job. making good money living the good life.
the reality is that we could have it all taken away at any given moment and most of us are too busy watching the TV to even think about making alternative plans.
this is a bitter fact especially in today’s broken economy.