How the atomic bomb destroyed the people and cities of Hiroshima and Nagasaki, Japan, 70 years ago.

The radius of total destruction was about one mile (1.6 km), with resulting fires across 4.4 square miles (11 km2). Americans estimated that 4.7 square miles (12 km2) of the city were destroyed. Japanese officials determined that 69% of Hiroshima’s buildings were destroyed and another 6–7% damaged. Some 70,000–80,000 people, or some 30% of the city’s population, were killed by the blast and resultant firestorm, and another 70,000 injured. Out of those killed, three quarters of them were civilians.

Here is Swoon’s lecture given at the TEDxBrooklyn conference late last year.

I was given a copy of Studs Terkel’s Working: a graphic adaptation by an acquaintance from The New Press, last Summer. I gladly accepted the gift and expressed my intention… 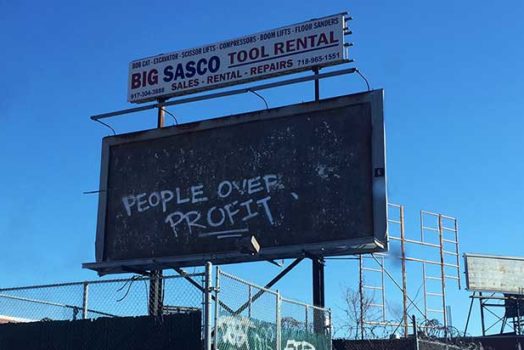 People Over Profit Gowanus Brooklyn, November 17, 2017 A standard anti-capitalist value that one would hope proliferates in the world.

stain gets up elsewhere

Justseeds member Chris Stain has been leavin his wares around. You can see more of what he’s up to over on his site at ChrisStain.com.