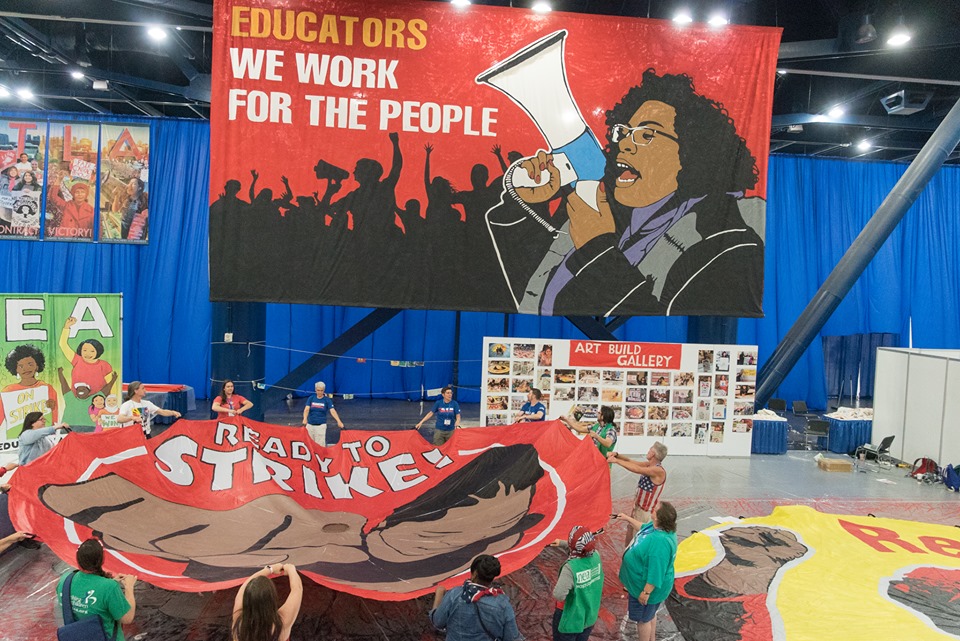 The Milwaukee-based Art Build Workers just spent a full week working on two large-scale art builds in Houston for the NEA (National Education Association) annual conference. This was our second time around organizing an art build for the NEA annual conference. Last year, we painted 15 parachute banners for the NEA Racial and Social Justice Conference in Minneapolis. This year we were asked to organize art builds for both the Racial and Social Justice Conference and the RA (Representative Assembly) Conference that brought together over 6,000 educators at the George E. Brown convention center in downtown Houston.

The Art Build Workers (ABW) began in 2017 and became an LLC in 2019. The group consists of six Milwaukee-based artists, designers, photographers and educators who have collaborated together in various capacities for the past two decades. Two of the artists are screenprinters and are part of Justseeds (Paul Kjelland and Nicolas Lampert.) Joe Brusky is the photographer in the group and is the social media coordinator for MTEA (Milwaukee Teachers’ Education Association.) We call Joe the “People’s Photographer.” Kim Cosier and Josie Osborne help lead the banner painting during the art builds, while Claudio Martinez is the graphic designer. For the Houston builds we also invited Jeanette Arellano (an art teacher in the Milwaukee Public Schools) to help paint the banners and Dewey Tafoya from Los Angeles and Self Help Graphics to screenprint. (Josh MacPhee from Justseeds was also in Houston to speak at the conference and he joined us for two days of screenprinting.)

The Art Build Workers work locally in Milwaukee (primarily with Voces de la Frontera), yet also travel around the country organizing multi-day art builds that help unions, organizations and movements amplify their messages through visual art, media, and archiving. The motto for this work is simple: “Before the march and before the strike there is the art build.” ABW primarily collaborates with the National Education Association (NEA) – the largest union in the country with an estimated membership of over three million members. ABW designs graphics for the movement, yet also coordinates designs from a vast network of activist artists and designers from around the country.

For the Houston builds we knew we wanted to focus on large banners and screenprints, but this time around we also wanted conference attendees to be able to take art home with them. So a month prior to the build we commissioned seven artists to design an offset posters. We invited Ernesto Yerena, Nisha K. Sethi, Melanie Cervantes and Jesus Barraza, Favianna Rodriguez, Jennifer White Johnson and Vy Vu, Josh MacPhee, Claudio Martinez and Paul Kjelland – artists who had thrown down so hard in designing images for the #RedforEd movement and/or the Voces de la Frontera movement.

Here is the series of seven offsets posters that were given away to NEA Conference attendees for free – images that will decorate classrooms and union halls for years to come.

We also commissioned two artists to design banners that celebrated recent labor victories. We invited Carlos Rogel and SPARC to create a banner that celebrated the UTLA contract victory and teachers strike in Los Angeles in January 2019 and we invited Micah Bazant to create a banner that celebrated the OEA contract victory and teachers strike in Oakland in February 2019. We had all collectively worked on the LA and the Oakland art builds and had contributed art to the struggle, but now these artists had the opportunity the visualize a victory and to make art that will serve as a teaching tool about this vital labor history for the long haul. In both cases the artists worked with our key contacts in the local unions that had organized the art builds – Cecily Myart-Cruz of UTLA and Kampala Taiz-Ranicfer of OEA. Together the artists and union organizers discussed the slogans and the images that would represent these historic labor strikes. And once the the images were designed, Carlos Rogel of SPARC printed them out on fabric at the digital lab at SPARC. Collaborating once again with SPARC and with Micah Bazant was music to our ears. SPARC had hosted the UTLA art build and Micah had made a key design for the OEA art build.

Organizing the offset poster series and the UTLA and OEA banners represented just part of the prep work for Houston. A large art build can take 4-6 weeks of preparation and Houston was no exception. The Milwaukee crew worked on designs, ordered the materials needed, traced out the parachute designs and the massive banners (20′ x 20′ and 40′ x 20′), printed photographs of past art builds, and tore down the muslin fabric for the picket signs and patches. It took a week of mini-art builds in Milwaukee (with help from friends in the community and Marshall Weber of Booklyn) to get everything ready for Houston. Once set, the van was loaded up, bags were packed and it was off to Houston.

The Art Build Workers were kept busy during three different NEA conferences in Houston. Nicolas Lampert, Kampala Taiz-Rancifer and Josh MacPhee discussed art builds and art activism at a panel for the NCUEA Summer Conference. We then put on our paint clothes and met the rest of the crew to set up for a two-day art build during the NEA Racial and Social Justice Conference. The pictures tell the story but when it was all said and down we painted a 20′ x 20′ banner and screen printed 400 picket signs that were then hand-colored by conference attendees. The hand-coloring was all essential. It allowed conference attendees to be creative and to personalize the images that they could then take home. Joe Brusky, Kampala Taiz-Rancifer of OEA, and Cecily Myart-Cruz of UTLA presented a one-hour talk on art builds, and we all got to hear Boots Riley give the keynote speech. The conference of 1,200 people inspired the soul and ended with a flash mob demo outside the conference center and with a march to a Houston Detention Center to demand an end to of deportations, detention centers, and the horrific crime of separating migrant children from the parents.

When the Racial and Social Justice Conference concluded we moved the entire set up two stories down to the first floor of the convention center and set up for the RA art build. For this build the team grew in numbers. Josie Osborne and Kim Cosier arrived, as did Dewey Tafoya from Los Angeles. Jeanette’s amazing sisters – Yvette and Deyadira (whose likeness is featured on the Ready to Strike parachute banner) also joined us for just about every day of the build. More so, NEA had a staff of ten amazing organizers to help out with the four-day art build for the RA Conference. The photos tell the story of what many hands can accomplish is a short amount of time.

During the four-day RA art build we hosted over a thousand conference attendees in the art build area. Teachers spent hours hand-coloring patches and learning the tactics of an art build. An article posted in NEA Today quoted one participant – Wyoming art teacher Paige Gustafson – who stated about the art build:

“I love it. I feel like, especially as an elementary art teacher, we’re often forgotten, and art is so incredibly important. Creating images that go along with a movement, whether it’s racial or social justice [or the national #RedforEd movement], brings people together, and creates ownership in the movement.”

The Houston art builds did what art builds always do: they create an empowering space for conversation, networking, and creativity. This build showcased to a vast audience just how vital the tactic of art builds have been in the #RedforEd movement. On a personal side, we were able to experience the conference and to hear (alongside 6,000 others) presentations by Sen. Bernie Sanders, Sen. Elizabeth Warren, former Vice President Joe Biden, former HUD Secretary Julián Castro, New York City Mayor Bill de Blasio, Sen. Kamala Harris, Gov. Jay Inslee, Sen. Amy Klobuchar, Rep. Tim Ryan, and former Rep. Beto O’Rourke.

There were many instances during the NEA Conference when teachers thanked us (the artists) for their work and for the past art builds in the #RedforEd movement. But we were always quick to say that it is us who are equally thankful. Our art gains its power by being part of a movement. What matters is the collaboration. When you combine the power of a union and the power of art you have a force to be reckoned with. It is one of the many tactics needed to win in these difficult and dangerous times.

To learn more about the Art Build Workers, click here. For past art builds check out: Los Angeles, Oakland, Milwaukee, Minneapolis, and Maryland. For the complete set of photos by Joe Brusky from the Houston art builds check out: the Racial and Social Justice Conference and the RA Conference. Also Joe’s photos for the NEA march to a Houston Detention Center and a die-in demo outside the convention center to protest the migrant detention centers and their horrific conditions.

Wow! Such greayt work, and so prolific!