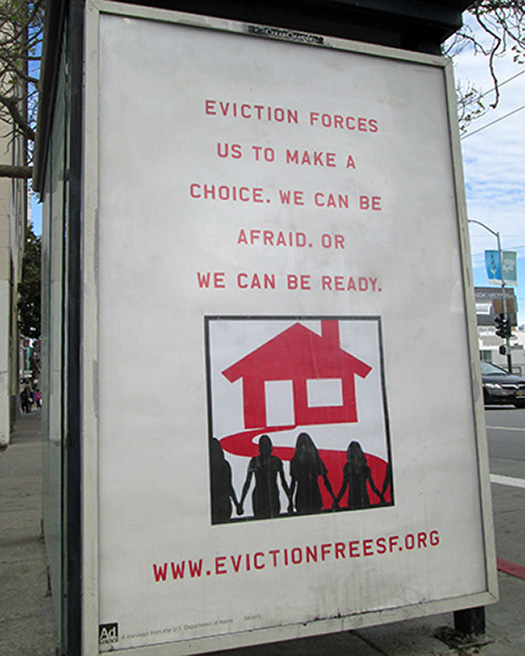 The California Department of Corrections (CDC) has unveiled a new campaign of bus shelter ads to confront San Francisco’s eviction crisis. On February 11, 2014, the CDC successfully apprehended, rehabilitated and discharged bus shelter advertisements throughout San Francisco. The ads were released into city districts with historically high rates of tenant displacement, including the Fillmore, the Mission and South of Market. One corrected ad sits at Valencia and 24th Street in the Mission District, a neighborhood with the city’s leading eviction rate from 2009 to 2013.

Made with the assistance of a previously unknown agency, the U.S. Department of Home Security, the corrected advertisements feature silhouettes of people surrounding a house with their arms linked. Just above the image, a dramatic headline states EVICTION FORCES US TO MAKE A CHOICE. WE CAN BE AFRAID. OR WE CAN BE READY. Imitating the headline’s style and color, a website promotes www.evictionfreesf.org, a volunteer-run organization that uses non-violent demonstrations to defend tenants facing eviction.

Pictures can be seen on the CDC website at www.CorrectionsDepartment.org.

The corrected ads were released in response to San Francisco’s growing eviction crisis, which has been triggered by a high-tech economic boom and a surging real estate market. According to a 2013 report from the city’s Budget and Legislative Analyst, all types of evictions increased 38% over the past three years with a 170% spike in Ellis Act evictions over the same period. The Ellis Act refers to a California law that gives landlords unchecked power to evict their tenants, remove their properties from the rental market and sell their buildings without occupants. Vacant units sell for more than occupied ones due to rent control regulations that protect many San Francisco tenants. As the city report acknowledges, the actual numbers of displaced tenants may be much higher. The report does not include housing built after 1979 which is not covered by rent control or the steep rise in buy outs which occur when landlords pay tenants to forfeit their rights and vacate a property.

Discharged on February 11th, the corrected ads followed closely on the heels of a citywide tenant convention, co-sponsored by prominent housing organizations and San Francisco’s public employees union. With several hundred people in attendance, the convention ratified proposals from a series of neighborhood-based conventions in 2013, including a potential ballot measure to halt evictions. The corrected bus shelter ads also appeared one week before the Renters’ Day of Action, a February 18th march and rally at the California state capitol in Sacramento.

The rehabilitated advertisements are currently at liberty and seem to have successfully readjusted to public life. However, these ads will remain under surveillance by department staff to prevent recidivism and any potential lapse into prior criminal behavior.

For more information on the operations and programs of the CDC, contact the California Department of Corrections Office of Communications at cdc@revolutionist.com.