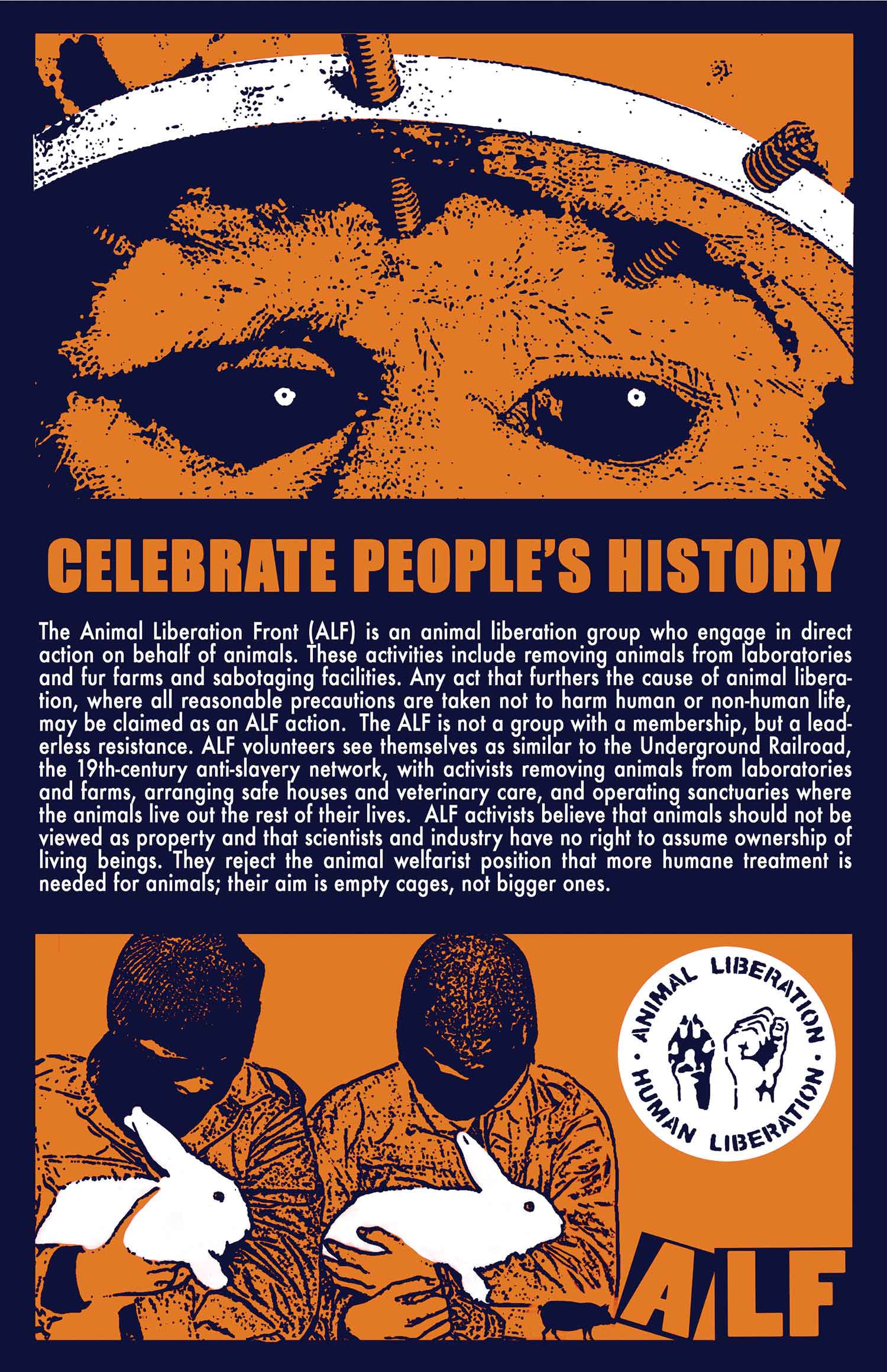 I recently had Karen Fiorito’s Animal Liberation Front Celebrate People’s History poster printed. It’s one of the sharpest designs in the past couple years. It’s really great when artists are passionate about the subjects of their posters, and this is what Karen has to say about hers:

Human beings can solve world hunger, climate change, pollution, obesity and disease with a simple yet profound shift in human consciousness, a shift from separateness and individuality to one which recognizes the interconnectedness of all beings. Most people do not want to think about it, but there is strong, undeniable scientific evidence that animals are sentient beings. Non-humans demonstrate sophisticated problem solving abilities, lead rich social lives and are capable of a wide range of emotions, including the ability to feel physical pain and mental anguish. In short, humans and non-humans are much more alike than previously conceived. Such as the artificial boundaries previously established between black and white, man and woman, there are no boundaries between humans and non-humans. The concept of “us” and “them” is purely a human construct. We are all sentient beings and are all equally invaluable to the future of life on this planet. All animals deserve respect and the right to live free of fear and suffering, and not just the human ones.

Sadly, we are in the midst of an animal holocaust, with an estimated 150 billion animals slaughtered each year for human consumption. This number does not include the millions brutally tortured to death in laboratories, circuses, rodeos, zoos, marine parks, fur farms, animal shelters and those killed for “sports” such as hunting, bull fighting, dog fighting and cock fighting. Laws do not protect these innocents; animals are considered property and nothing more. For those of us conscious of their suffering and lack of voice, these facts are unbearable. Luckily for the animals, there is the Animal Liberation Front, a kind of modern day underground railroad for non-humans. This group is anonymous and leaderless. Anyone can be a member, as long as they take direct action in the liberation of animals and as long as no physical harm is caused to any animal (including humans) by result of such action. For the over 40 years that ALF has been active, never has a human been harmed by their actions, and all the animals liberated by this group have been given proper medical care and found safe houses to live out the rest of their lives in peace, free from suffering. Regardless of these facts, the United States government has declared this group a terrorist organization. Although I am not a member of ALF per say, I fully support their courageous efforts in face of such devastating consequences and risks to their own lives. One day the members of the Animal Liberation Front will be regarded as heroes, not terrorists, as long as we humans can make that paradigm shift needed to evolve.

Karen runs the amazing Buddha Cat Press, which you should check out HERE. Her ALF poster can be purchased for only $4 right HERE! You can check out all the Celebrate People’s History posters HERE.