“While the power of the Europeans has continued, I see the other part of the Ghost Dance prophecy coming true today. So-called ‘Hispanics,’ with faces that sure look like Indians to me, are returning to repopulate North America. We cannot always speak to each other because we have learned the languages of different colonial powers. But these Indians have as much right to come and go on our land as the geese when they migrate north and south. No one would dare to ask them for their passports and visas as they cross man made borders.
Instead of seeing ‘Hispanics’ as outsiders who do not belong here, we need to start seeing them as ancestors of the original inhabitants of these lands. They are the living fulfillment of the Ghost Dance prophecy.”

First Nations United, an Indigenous organization largely made up of members of the Red Lake/Ojibwe and Dakota nations, would like to formally express its outrage and disagreement with the SB 1070 (“Support Our Law Enforcement and Safe Neighborhoods”) Bill passed last week by the state of Arizona. This bill is extremely detrimental to the indigenous communities (including indigenous peoples of Latin American origin), which reside in the state of Arizona as well as those who live throughout the country. The language of the bill states that if there is “reasonable suspicion” that a person is an illegal immigrant, a “reasonable attempt shall be made, when practicable” to check for documents. Such language purposefully promotes the racial profiling of brown-skinned people, and in particular, of people of American indigenous background. As an indigenous organization, which stands for the civil and human rights of indigenous peoples throughout the continent, we are concerned that this bill will promote the unfair and discriminatory arrests, prosecution, and deportation of people of American indigenous descent-not only of those who belong to federally recognized tribes, but also of the hundreds of thousands of indigenous people who have migrated from South/Central America and Mexico to what is now called “the United States.” Indigenous peoples across the continent do not recognize the borders established by the settler colonialist state on our lands, and, we do not agree with the malicious and dehumanizing way in which the settler colonialist government wants to enforce them.
As an Indigenous organization, we recognize that indigenous peoples from Latin America have every right to migrate up and down the continent as they please and as they have done through trade and communication routes since time immemorial. The native peoples of the continent should be the ones establishing immigration laws and enforcing them. However, because we were disempowered through genocide and colonization, and because we have consistently treated “foreigners” in a more humane and hospitable way, we respect peoples’ rights to migrate. If we did enforce such power, only tribal identifications from throughout the continent (including documentation identifying peoples from Latin American indigenous ancestry) would be recognized as legitimate, and we could very well racially profile people of Caucasian descent as the true and eternal foreigners.
As the first peoples of this continent, we pose this question to Governor Brewer, Senator Russell Pearce, and law enforcement in the state of Arizona, “Who are you to check for documents?” We remind them that the power they have taken to legislate was established by an immigrant and illegal settler colonialist government, which has consistently relied on the genocide and mistreatment of the original peoples of this continent.
First Nations United greatly objects to SB 1070 and denounces Governor Brewer, Senator Pearce, and the State of Arizona as anti-Indigenous, cruel, and racist. We call for an Indigenous boycott of the State of Arizona until this bill is repealed or found unconstitutional as it will gravely violate the civil and human rights of indigenous people in the state and throughout the country.
First Nations United
All Saints Church
3044 Longfellow Avenue South
Minneapolis, MN 55407

The Coming Insurrection-Release at Barnes and Noble’s

Liberating Lipsticks and Lattes By COLIN MOYNIHAN Published: June 15, 2009 in the New York Times They arrived at the Barnes & Noble at Union Square in small groups on… 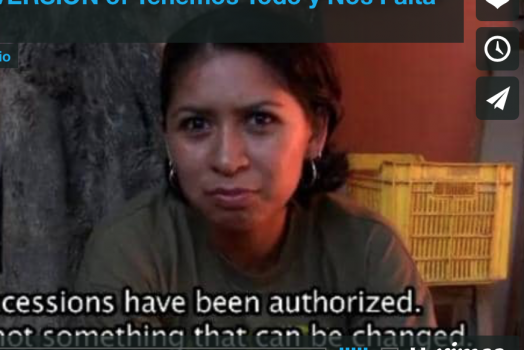 ENGLISH VERSION of Tenemos Todo y Nos Falta Todo from Palabra Radio on Vimeo. A short video about a community in Southern Mexico organizing resistance to future mining projects. They…

Chris went to Amsterdam recently for the festival Utra de la rue celebrating the, now, 400 year relationship of the Dutch to NYC. This was Chris’s take on that. photo…