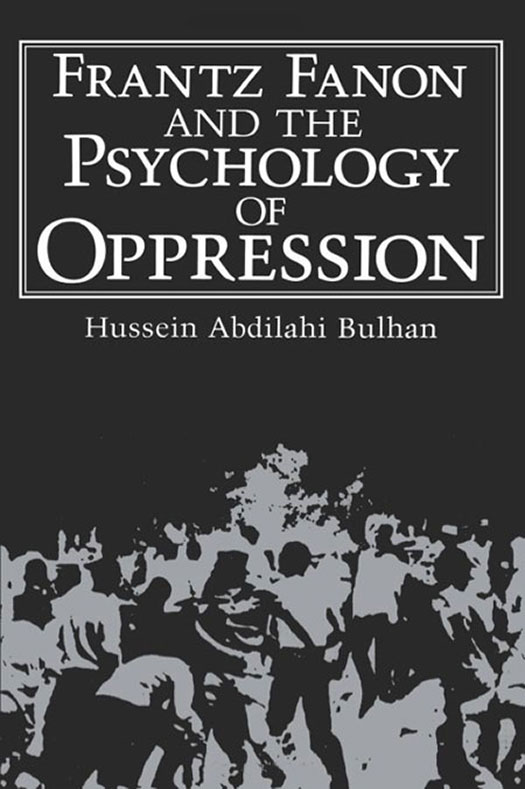 Here is the final post in this long-running Fanon series. Thanks to all that have been with me for the entire ride! You can see all the covers (133 different ones!) HERE.

To start out, to the right is Hussein Abdilahi Bulhan’s Frantz Fanon and the Psychology of Oppression, an academic title published in 1985 by Plenum. The cover uses not only same photograph as the Grove mass-market paperback of Wretched of the Earth, but the same stylization and posterization of the image. Only on this cover the image is grey and black, instead of the much more provocative orange and black of the original. The cooling of the colors and the traditionalist box around the title help imply that this is a study of a revolutionary, not a call to revolution.

It’s rare for anyone to write seriously about revolution for long before their works are jumped on by various sectarian political groupings bent on using them to prove or dis-prove whatever that groups prevailing argument is at the time. Fanon is no exception. Here are two editions of Lou Turner and John Allan’s Frantz Fanon, Soweto, and American Black Thought. Both editions (1978 to the left, 1986 to the right) were published by News and Letters, a Marxist group formed by Trotskyist Raya Dunayevskaya, once comrade of CLR James, like Fanon a revolutionary from the Caribbean who found his way to Africa. Both covers have the naive charm of far Left publications, with extremely amateur design and all that comes with it. Awkward but interesting illustrations and montage efforts blend with the most basic type-treatments. Continuing along the same theme, Jack Woddis took on Fanon’s ideas in his book New Theories of Revolution, first published in the UK by Lawrence and Wishart in 1972, and later put out in paperback in the U.S. by New World Paperbacks, a wing of International Publishers (for more on New World Paperbacks, check out my posts about their covers HERE, HERE, and HERE). Woddis was a long time member of the UK’s Communist Party, and thus tended to slavishly follow the ideological whims of the Comintern. As for the covers, the New World edition is a throw away, dull and uninventive, but the UK edition shows some spark. All type, the main title is in a gracefully tall, black, gothic sans serif, with the subtitle snuggles into the space between words, popping out in white. Below are two of the more creative and non-traditional covers of the batch. Matthieu Renault’s book, which roughly translates from the French to Frantz Fanon’s Anti-colonialism to Postcolonial Criticism (Editions Amsterdam, 2011) features a strong illustration of an African scene, possibly from a painting, although I don’t know the source. The colors are bold and bright, and are set off by the white border. The title is readable, but somehow also blends in with the image, instead of interfering with it. This is one of the rare titles that has been bold enough to image something other than Fanon himself, or an African mask.

Udo Walter’s Das obskure Subjekt der Begierde (Unrast, 2001) [Translation from the German: That obscure Subject of Desire: Frantz Fanon and the pitfalls of the subject of the exemption] also forgoes the traditional cover fodder for a strange image of an eye in a cage. The eye recalls the well-known image by artist Rupert Garcia (used by the prison activist group Critical Resistance), but is less defined, its edges blurring into the face. Both Nigel C. Gibson’s Fanon: The Postcolonial Imagination (Blackwell, 2003) and Ato Sekyi-Otu’s Fanon’s Dialectic of Experience (Harvard University Press, 1996) try to reinvigorate the over-used photographs of Fanon by cropping them to only leave the eyes. This works to a large extent, especially in the case of Gibson, where the eyes are allowed to carry the entire design. On Sekyi-Otu’s cover, the eyes have to compete with an immense amount of design detritus, which seems to be filling the page more than anything else. If anything it creates a real retro-sensibility, which would have me guessing the cover was from the mid-80s rather than the 90s. And to finish it all off, we’ve got the last two stragglers in the Fanon cover marathon. Pramod K. Nayer’s Frantz Fanon (Routledge, 2013) hasn’t yet been published, so there is still time for someone, anyone, to tell the production team over at Routledge that this might just be the worst Fanon-related cover ever made. Also coming in at the bottom is Jesse Russell and Ronald Cohn’s Frantz Fanon, which at least has the benefit of being Print-On-Demand, and thus expected to have a ridiculous clip art image that has nothing to do with the subject. This book does happen to have one of the poorer chosen stock photos, with the multiracial pile-up of hands possibly being as close to the exact opposite of Fanon as any image could illustrate! On point with the aesthetic critique of these covers. However, the “sectarian” cudgel doesn’t quite fit the groups that Dunayevskaya either founded or would influence after her death. From my experience denouncements and maintenance of ideological division, standard sectarian stuff, has not been a characteristic of Marxist-Humanists either then or now. If willingness to engage in struggles over ideas with others on the Left in respectful ways that avoid ad hominem attack is also considered sectarian, that’s another matter altogether.

Here’s a new art site trying to grapple with the fact that we’re 5 years into a never-ending war, and most of us have moved on to pretend that it…

Tech savvy anti-authoritarians have set up a cluster of servers for anonymous testimony and coverage of the demonstrations in Iran from inside and outside of the country, Anonymous Iran. This…

Into Iraq by Art Hazelwood

My friend and kick-ass printmaker Art Hazelwood has just released a hand-printed artist book called Into Iraq. Check it out HERE. It;s pretty cool, and here’s what he has to…

My friends Bettina and Devon in Chicago have recently released a new album as Teko Sãso, a 2-piece anarchist folk death metal band! Their first record, 11/11, is based on…