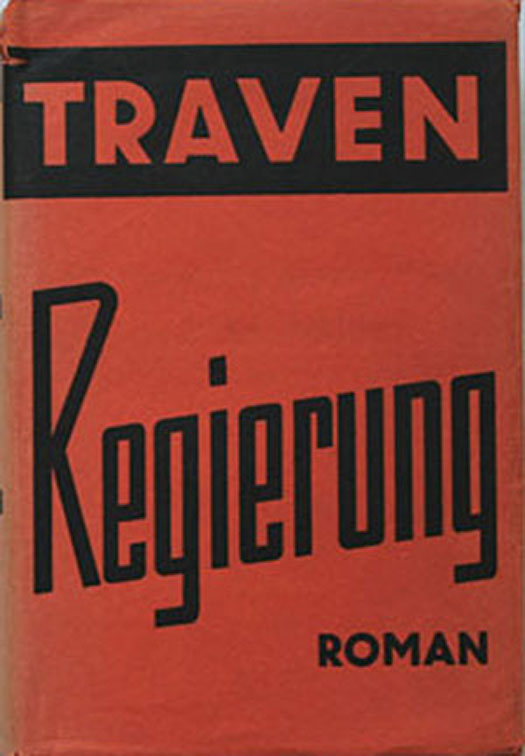 In the decade from 1931 to 1940, B. Traven published a series of six books known as his Jungle Novels: Government (1931), The Carreta (aka The Cart) (1931), March to the Monteria (aka March To Caobaland) (1933), Trozas (1936), The Rebellion of the Hanged (1936), and A General from the Jungle (1940). The Jungle novels are a series of interconnected stories about the struggles of the Indigenous in Chiapas at the end of the 19th Century, and how their rebellion starts the Mexican Revolution. This week let’s take a look at the first three novels:

I’ve found four covers for the first novel, Government. Above is an early German edition. Below is the currently available trade paperback published by Ivan R. Dee (with its requisite Diego Rivera painting on the cover), and a couple 60s/70s paperbacks. You’ll notice as I go through these that beyond the early editions, most publishers started producing the whole series with a common cover design. The one on the left is an early Hill & Wang (1975) cover schema I believe, with the expressionistic monotone watercolors. All of the books in the series on the right (Allison & Busby, UK, 1980 or so) have that same stencil font and over-the-top, hyper-realistic romance novel meets Mexican Revolution illustrations: I found a little bit more diversity in The Carreta covers. Here’s a Mexican edition with an even more over-the-top romance novel-type cover and an airy Italian version. I quite like the German paperback edition at the top of this article, with its stylized and blocked out figure and cart and sparse use of color. Next up is The Carreta. The Hill & Wang and Ivan R. Dee cover styles: And an early German hardcover and what I think is a UK edition. Neither that stunning, especially the UK one, with it’s awkward mix of photo-illustration, dull type, orange color, and pre-Columbian hieroglyph… The third book in the series is March to the Monteria (or mahogany land). The cover on the left is quite strange, seems like Dell was aiming for the Westerns market, but they went a little too far, it looks like a book about a rodeo! On the right is a German paperback, and one of my favorite cover illustrations in the whole Traven series. Next week you’ll see some more of these!: And finally, on the left another ’70s English language cover design series (an earlier Hill & Wang paperback I think). They all have these black and white multi-image illustrations on the cover which don’t quite click for me, a little too much Edgar Allan Poe and not enough B. Traven. On the right is an edition that is either Spanish or Mexican, I’m not sure. The cover is interesting, reminds of a film poster, but maybe that is the arm shape which seems like it was taken from Saul Bass’ film graphic for The Man With the Golden Arm. Reading La Carreta right now!
I sure do like the German designs the most.
And for some strange reason that orange UK design of The Carreta. The pre-Colombian design pushes it, but I it and like how simple it coulda been.
Back to my book!

This is great. I love the German edition of the Carreta! The use of space, bold lines, bold text, diagonal line… very nice. Now, I am also intrigued by the books, library time.