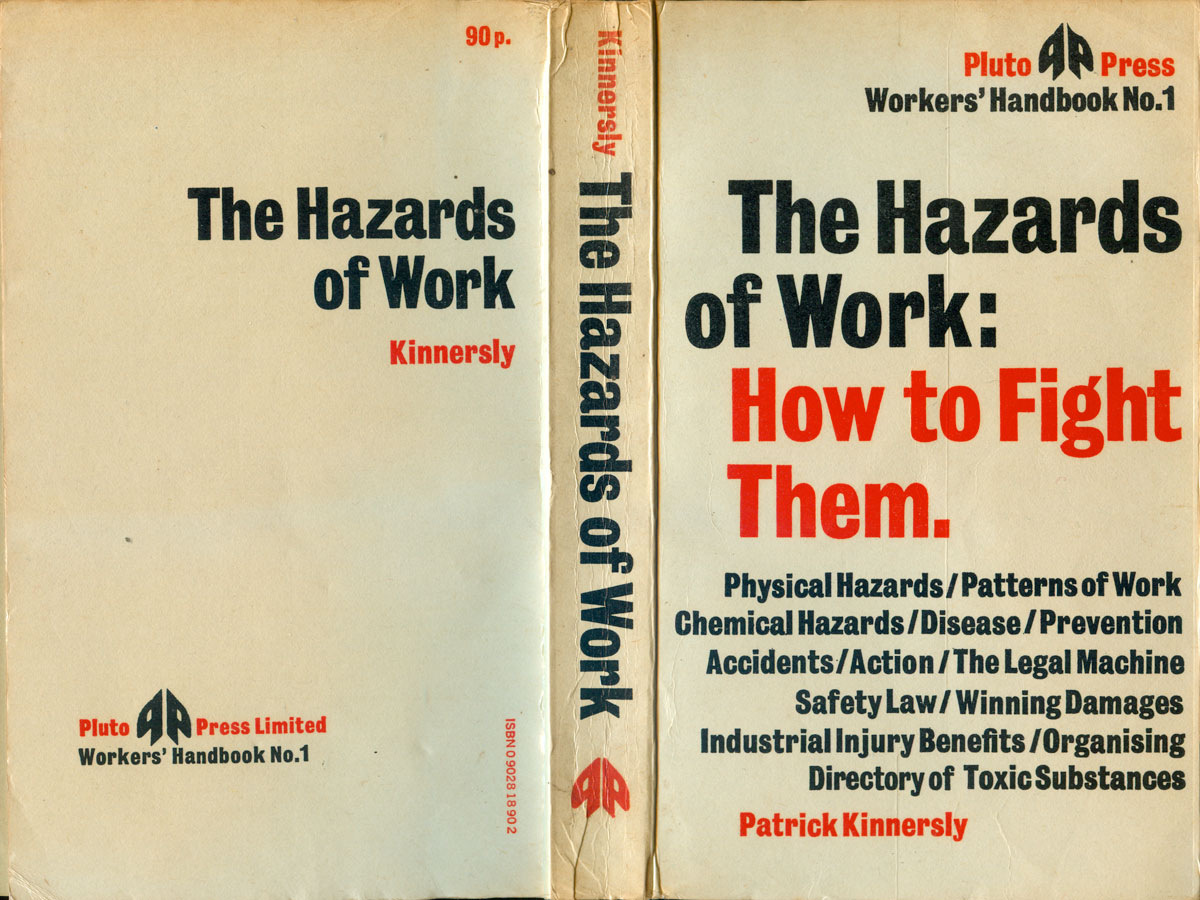 Back in 1974, someone smart at the British radical, socialist press Pluto decided to publish the first of a series of Workers’ Handbooks. The Hazards of Work: How to Fight Them by Patrick Kinnersly was Handbook No.1 of a series of at least a dozen books. The first couple were ingenious in both conception and design. They are mass market paperback size, so they can easily slip into a pocket, and their aesthetic is clear and direct, handbook-ish without being boring. The only visual element is the bold gothic type face, and the alternating of black and red text highlights the catchiest bit: “How to Fight Them.”

Pluto Press was founded in 1969, initially as a publishing affiliate of the International Socialists, although by the time these handbooks were being published, they had already become multi-tendency. Supposedly these handbooks were quite successful, especially the first one, which makes sense because at the time Pluto did a lot of direct sales to trade unions, cutting out the mainstream book trade as middle-man. The history of the Workers’ Handbooks is sketchy, with little easy to find online, so I’m not sure who came up with the idea. But it is clear who came up with the design, Richard Hollis. He’s responsible for both the insides and covers, and they carry many of his distinctive design signatures such as the fonts, deep paragraph indents, and the mix of sans and serifed type within the interior. The overall design is very bold and efficient, easy to read but also distinctive. The second book in the series, Christopher Hird’s Your Employers’ Profits (another clever title) caries the same over-all design inside and out, but suffers from blue being the secondary color, which is much less bold than the red from the first book. In addition, the need to fill the back cover with exposition about the books contents likely makes some sense from a sales perspective, but at the same time seems silly since Hollis has already smartly included the basic table of contents on the cover. I haven’t been able to figure out a complete bibliography of the handbooks, as some are difficult to find, and others reprinted multiple times, so the order and a complete list are elusive. By the third or fourth handbook, Hollis is no longer the designer, and they’ve abandoned the numbers, only stating that each volume is part of the “Workers’ Handbooks” series.

In this new iteration—designed by Colin Bailey—the secondary color is no longer an accent, but the whole cover’s color. While the bold, sans serif title is preserved, the secondary information is now set in a squarish serifed font (possibly Rockwell), and the list of contents on the cover are now squeezed between thin black horizontal lines. In hindsight these changes seem like a regression, complicating the cover rather than simplifying it. But I also empathize with the designer, I mean if I was asked to improve on Hollis’ near perfect initial design, it’s hard to imagine doing anything other than mucking it up in some way.
Although now designed by someone else, the interiors largely follow the same basic design of the first books so I didn’t even bother to scan an inside shot. With Cunningham’s Non-Wage Benefits, the cover has been very slightly tweaked again, with the title on the spine no longer set in large sans serif, and instead in the tight graphic serifed text on the front cover. A real major design change occurs by 1984, as exemplified by Jeremy McMullen’s Rights at Work (although the new design is also the work of Colin Bailey). The simple, stripped down covers of the past have been replaced by a garish mess. Greyish green, red, and yellow compete for attention, while the title is set in an ugly and cartoonish bold serif. The design efficiency that set the early Workers’ Handbooks apart from the amateurish actual worker handbooks you would get at a workplace is gone, and now this looks like the kinds of booklets passed out at my crap jobs during the early ’90s. The cool, crisp interiors have been replaced as well, with a clunky use of thin trade gothic that also smacks of industrial manual design.
One might not notice it at first, but the series title has also changed from “Workers’ Handbooks” to simply “Handbooks.” It’s a small change, but a sea change politically, seemingly signaling a turn away from seeing self-identified workers as the primary audience for the books. I’m not sure how long the series ran for, as there is no evidence of it on the current Pluto site, and all these titles are long out of print. Below is my best attempt at a bibliography for the series:

Josh MacPhee
Book
Out of Stock
Create a new list