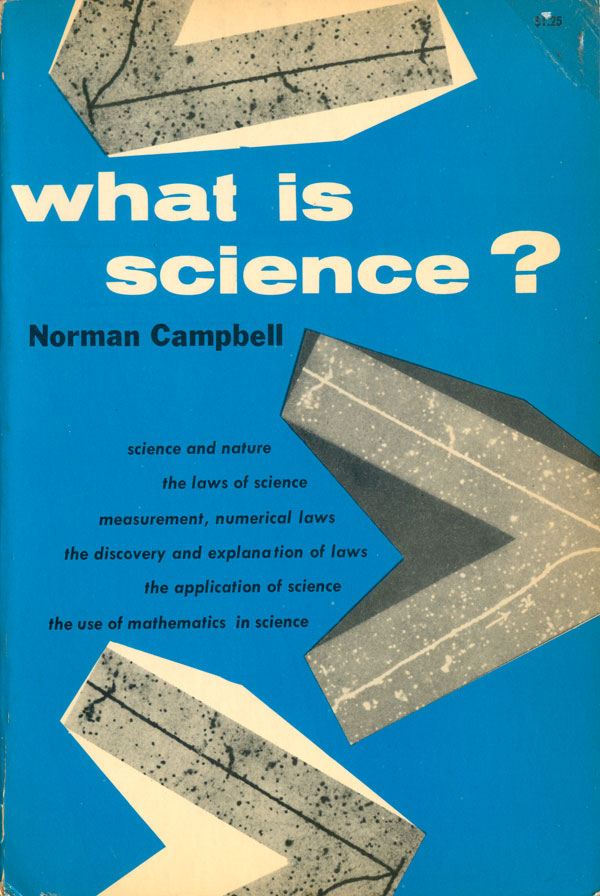 I keep running into more and more cool covers on Dover books about science and math (and some art…) from the 1950s/60s. I first looked at these almost a year ago, when I highlighted six covers in JBbTC 147 (HERE). Now I’ve found nineteen more. This week I’ll look at the science and art books, next week at the math (and next week I’ll publish a full bibliography, including what little designer information I’ve been able to glean). And where would be better to start than Norman Campbell’s What is Science? from 1952? Which begs the next question, what are those scattered floating v’s on the cover? They’re perfect for the book because they are “science-y” but also impenetrable. They could be slices of images of a virus from a microscope, or pieces of meteor trajectory, or concrete blocks from some sort of building project. Science is just filled with all kinds of mysteries.

But there is no mystery as to what makes these two covers below eye catching. Concentric rings. Such a simple shape and pattern, yet almost always mesmerizing. These covers are completely different in color scheme and tone, yet both are very effective. Both of these covers evoke the workings of the brain. William James’ The Principles of Psychology is extremely literal, the shape of a brain dominates the cover, while Babbage and his Calculating Engines is more creative, superimposing wild-looking machines on top of an image of Babbage’s head. To the right is one of my favorite of these covers. There is something almost comic about the design, with the small black and white image of Pasteur floating on a giant expanse of dark mustard—the color composed from orange and a nice light aqua-blue. While the orange color in its pure form is represented in the book’s title and author, and a small explosion at the top of the page, the blue exists only in a mirrored parallel explosion. These two bursts of color are the only bright spots on the cover, and they function like a pair of hovering eyes, or alternatively a big bang moment, something exploding into being.

On to the art-related books. The Brown Decades is decorated like a poor-mans modernism. Very clean sans serif type sits in a series of brown rectangles, the angles on the right side convert them alternately into a series of steps or a pile of hanging minimalist boxes a la Donald Judd. The vertical line that cuts through the entire cover fights against the optical illusion, flattening the shapes and bringing everything onto the same plane.

The type and outstretched hand on the cover of The Craftsman’s Handbook are much more classical than modernist, but they function in a similar way to the visual elements of The Brown Decades. They are simple and clean, yet still leave a small sense of wonder in the viewer. Where is this hand coming from? While it is cracked like a classical sculpture, it has a sleeve, something that would never look familiar on the wrist of a Greco-Roman marble. Franz Sales Meyer’s Handbook of Ornament has a cover which completely diverges from the above two. Rather than efficiency, here the point seems to be to overwhelm the viewer—to prove at the first glance that the book is actually as chock full of images (3,002!) as the cover copy promises. And as if the images themselves weren’t enough, small read arrows point to them, as well as everything else on the cover. It feels like a deluge of information, even though each part is distinct and quite self-contained, without overlaps or collaging.

Ayer’s Language, Truth, and Logic is also a bit of a black sheep. I can’t quite figure out what the pre-Columbian glyph is supposed to be communicating, and I’m not sure if that is because it was always an odd cover, or if in the late 1950s it meant something different than it does now.