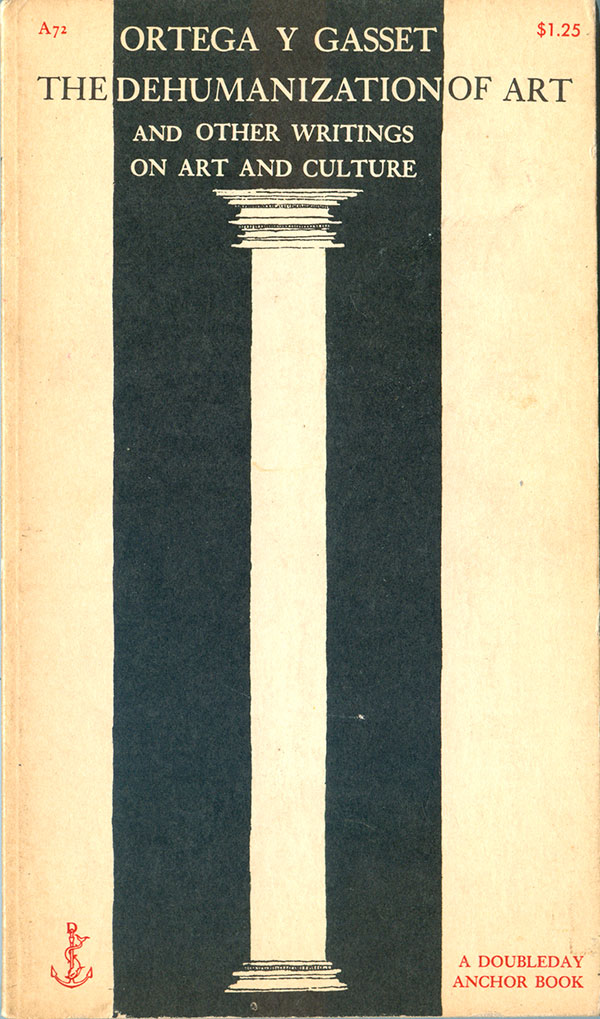 In my mind, three of the most significant social realist printmakers that were working in the US in the second half of the 20th Century were Leonard Baskin, Antonio Frasconi, and Ben Shahn. While all three largely existed within an art world context, each also had a career doing commercial illustration work within the publishing world, and each racked up quite a collection of book cover credits. While a huge favorite of many Justseeds members, Baskin (more HERE) is the one I know the least of, and I only really began to look at his work quite recently.

I started noticing his work on book covers a year ago or so with this striking cover for Ortega y Gasset’s The Dehumanization of Art (1956). A basic drawing of a column sits in a black field, squeezed between two white stripes. The lone column aches of alienation, yet the human hand visible in the drawing’s details belay the “dehumanization” of the title. This tension gives the design a level of strength unexpected for its simplicity. This is one of five covers of 1950s and early 60s Doubleday Anchor mass markets I’ve found designed by Baskin.

Below are the other four titles. For the DeTocqueville and Diderot covers, the red wood type ornamentation and floral patterning are central features, far more than Baskin’s actual print work. The portrait of Diderot is fine, a little dark and macabre, but it is the diamond of red leaves that pulls the cover together. In comparison, the lifesize illustration of George Bernard Shaw is the most Baskin-esque image on any of the covers, and aligns far closer to Baskin’s fine art than any of the other covers. While the eagle on Reunion and Reaction is an awesomely patterned and detailed image, it is poorly used, being stuffed between the blocks of text above and below. I want to see the image bigger, commanding the page. 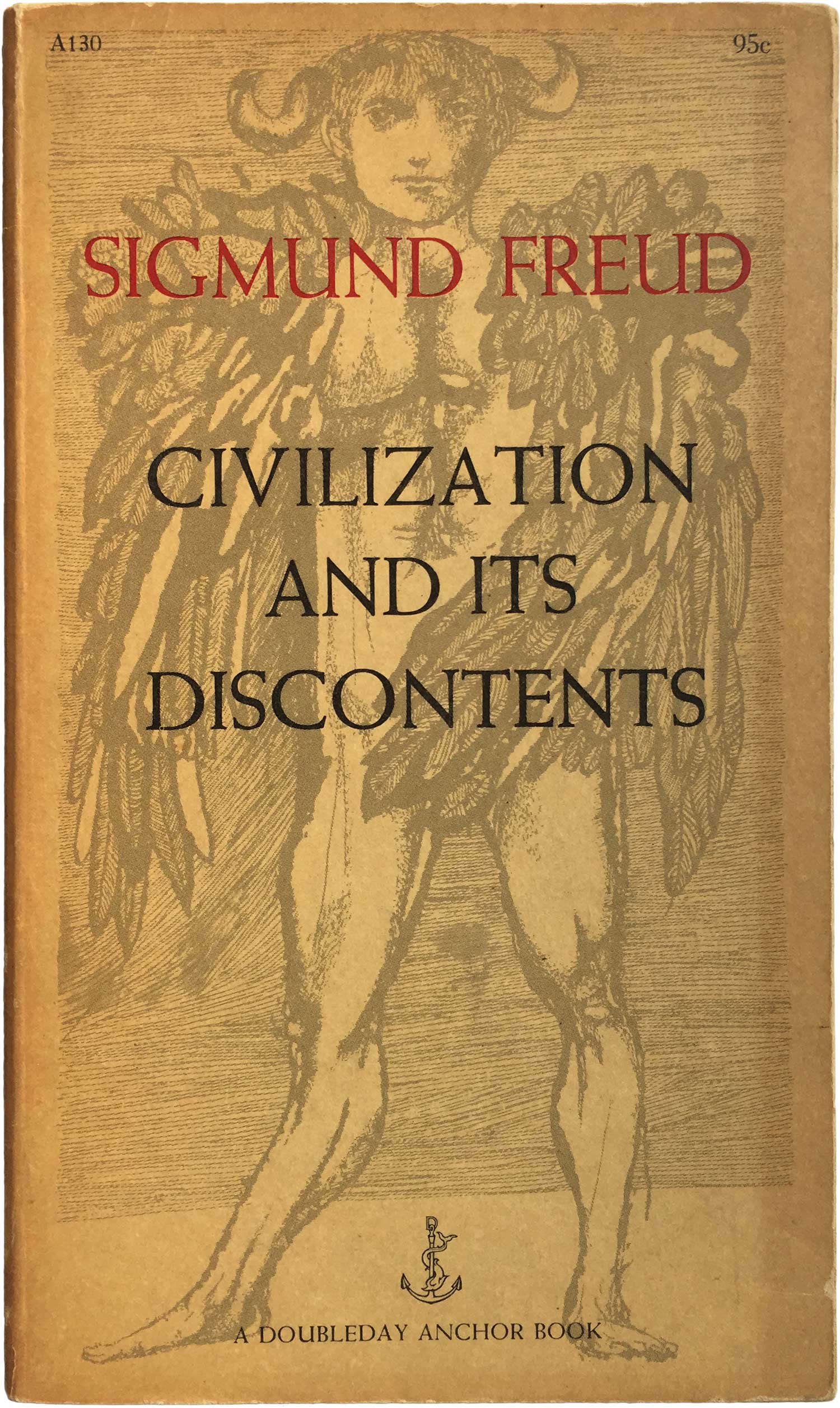 Below are a couple later Anchor titles, and Baskin’s hand is much less present in these. It is unclear if the imagery on both the Mattingly and Milton covers was created by Baskin, or if he is simply pulling and reusing historical material for the design. The classical statuary on Roman Imperial Civilisation is printed so light as to be almost invisible, as if the past is fading away with the cover. Almost all of these Anchor covers use extremely classical fonts for the titling, either variations of Garamond or Times New Roman.

I just found this nice cover for Richard Chase’s The American Novel and Its Tradition, which features a Baskin tree and typography by Edward Gorey. It’s interesting in the context of all these Anchor books because while it is still subdued, it uses so much more color, including the comparably bold magenta of the title and logo. In comparison, the Fry cover is downright un-Baskin-like, just a simple striped layout with no human hand, and he didn’t even do the typography. It’s from 1956, and might be one of his earliest covers. 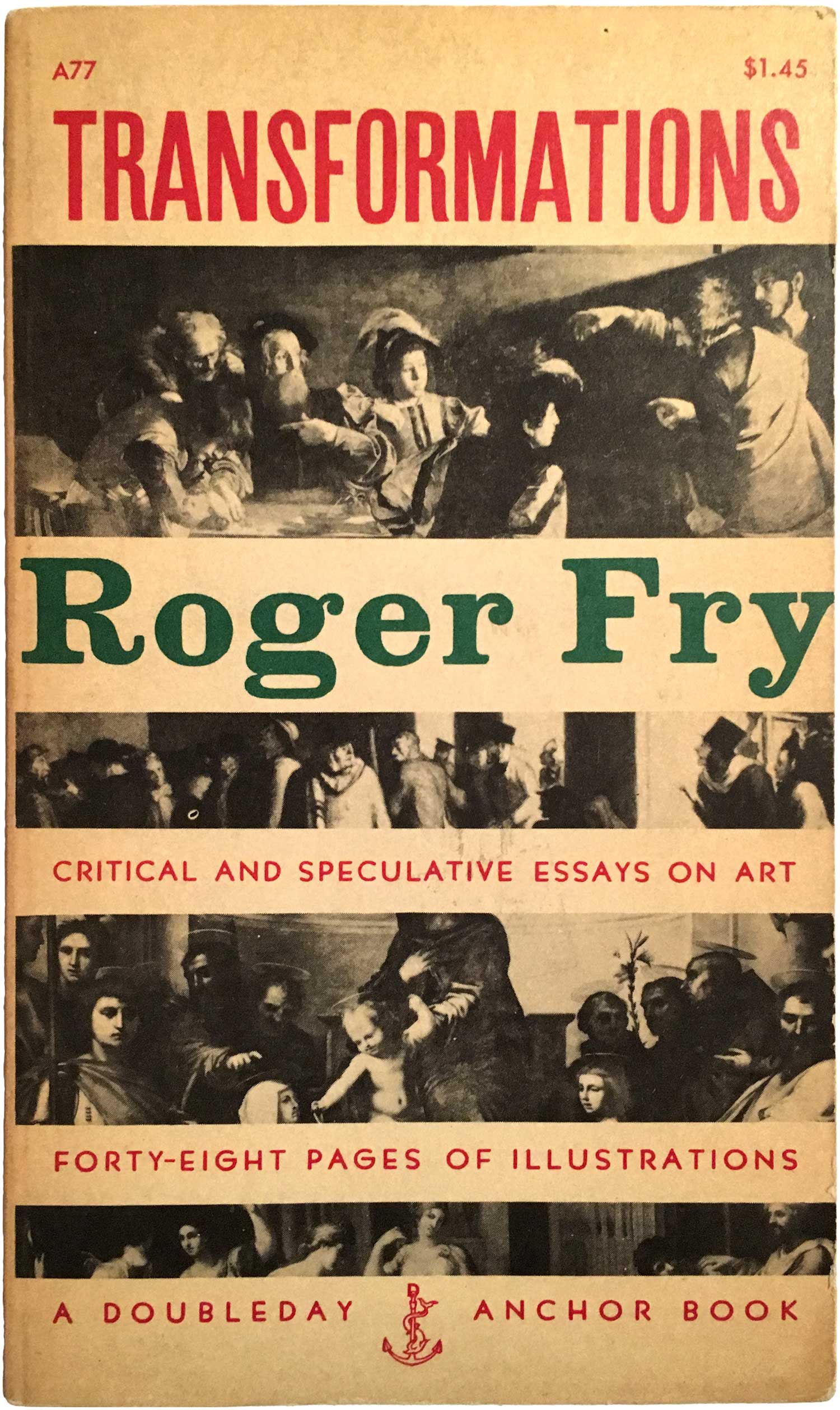 The cover of Henry Adam’s Mont-Saint-Michel & Chartres is a rarity here, a heavily detailed illustration which doesn’t feature the human figure or form. I assume the illustration was done for the book, as it is dead on for the island castle in Normandy. It’s difficult to say much about many of these covers, as they are so direct, the subject of the book is duly depicted on the face.

The Conrad book is an exception. The bald head is certainly not Conrad’s, more likely Kurtz from Heart of Darkness. But it’s open to interpretation, with my main impression being that the head is flattened like the flowers, as if both were crammed into a scrapbook. I think Martin Buber’s Tales of the Hasidim (Schocken, 1980) is my favorite of the lot. Baskin’s alternately scratchy and splashy illustrative style works perfectly here, capturing a deep sense of ferver in the face. The decision to print the image black over a solid reddish orange background was smart, giving a sense of full saturation and power. The title stamped out in small white letters is clean and handsome, and does nothing to detract from the compelling portrait. Their will be full bibliographic information about these books in next week’s post, which will feature nine more Baskin covers.
[This post has been updated twice with additional info and images, both on June 3, 2016 and January 7, 2018.]