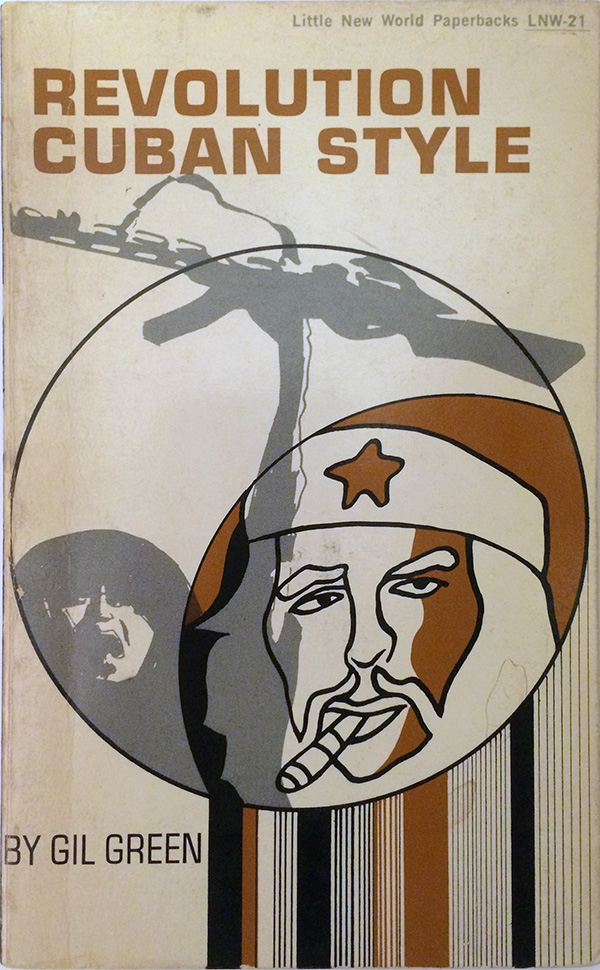 This week I’m going to go through the second half of Little New World Paperbacks, roughly in order of their issue number. The last number I’ve found is LNW-39, although it’s possible there are more and I just haven’t been able to track them down. This week and last I’ve shared cover images for twenty five of the books, so at least fourteen more are out there. I’ve also been able to build close to complete bibliography, filling in the blanks from the book lists on some of the back covers. That’s at the end of this post.

Above is the cover for Gil Green’s Revolution Cuban Style (LNW-21). It’s one of the nicer covers, drawing graphic elements from multiple political posters of the time (this was released in 1970). The image of a Viet Cong in the background is drawn for an anti-Viet Nam war poster, and the image of Ché in the front is a variation on a image by one of Cuba’s well-known poster artists, Raul Martínez. The use of the poster images is interesting, because it suggests a play on the word “style” in the title, although I doubt that was intentional. But typical of the Communist Party USA, they still botched the attempt to be culturally relevant, using Martínez’s pop style, but in muddy browns and greys, instead of bright pinks and oranges.

Speaking of Cuba, the cover of the Lenin book below has the feel of a Cuban political poster, with the pre-colonial art overlayed with strong, almost Futurist type and sharp lines. It’s compelling and forward thinking. Here’s another example of covers changing colors over time, with the original Class Struggle in Africa in red, then a later printing in green-ish blue. I’m unsure if the color change acknowledges not just a new printing, but updates to the insides. There aren’t any updates I can see, but… The cover to William Pomeroy’s 3rd book in the series, Apartheid Axis (1971, LNW-28) is a melange of styles. For color we’ve got the old New World fallback of black and brown, for fonts a strange mix of bold Helvetica and an Art Deco-type, which looks both ornate and almost too emotional, literally in the shadow of the bolder Helvetica. The splitting of APART away from Apartheid feels a little too obvious, and awkward since there is no other wordplay present. But the most interesting thing about the cover is the shadow under Axis, which at first glance seems like a simple, if deep, drop shadow. But it’s not, the black below the X and S are off, not exactly conforming to the rules set by the other letters. I’m not sure if it is purposeful, but it sets the whole cover a little on edge, something just doesn’t feel right about it. Cornforth’s Historical Materialism has a cover suited for the staid content, the green and white frame reading like a very early Penguin classic, or some other Continental-type design. This is supposedly LNW-30, but has another unique number on the cover: 0327. I’m not sure, but this could mean that this is a much later edition and there is a different, original cover. This is the only cover that forgoes almost all conscious design, even The Woman Question above maintains the LNW logo in the top right and has the series of horizontal lines giving a sense of some designers hand. The Hall book above, and the two below, seem to jump back to the very first titles, featuring very simple type and then a single illustration, just dumped on the cover. Each of the illustrations is credited as they would be inside, but on the front cover—an odd format I’ve never really seen anywhere else. With Watergate (1972, LNW-38) we’ve hit a new design format all together. The title is still bold and straightforward, but the image, for the first time, is really abstract, a bold decision for American Communists! I think it’s a series of smoke puffs, as if just below the picture’s frame there were a dozen cigarettes, just burning away. There might be some direct reference to Watergate which is lost to me, or it could just be an attempt to call into being the idea of a closed boardroom of cigar smoking bureaucrats.

The illustration on the frontispiece is really great, an editorial cartoon of the interconnected web of Watergate corruption. Looks like it’s by someone named “Andrews” who did cartoons for the Daily World, the CP USA newspaper. And the final book is Gus Hall’s The Energy Rip-Off (1974, LNW-39). This is the first book in the series that actually looks communist, at least in a Soviet way. The industrial photos on the cover, and how they wrap around the back, are reminiscent of Russian industrial design magazines and other photo-montage-based publication covers from the 1920s and 30s. The titling-type finally has a little flair as well, set in a big pink block, the “THE” set off to the top left, the Y in Energy so playful, and far from a standard sans serif. This cover is definitely moving in a strong and new direction, it’s too bad this is the last one in the set. I’ve compiled this bibliography of Little New World paperbacks, it’s incomplete, but as far as I can get with available information: