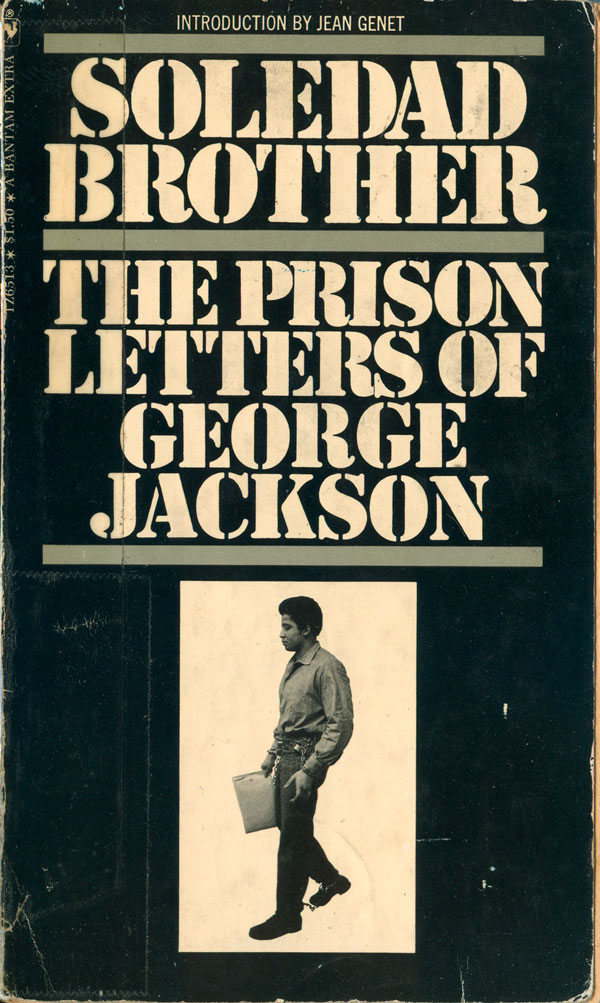 In many ways the quintessential political prisoner of the 60s was George Jackson. At age 18 he was caught robbing a gas station, and sentenced to an indeterminate period of one year to life in prison. He was politicized while in Soledad Prison in California, and eventually joined the Black Panther Party. Jackson and two other prisoners were accused of killing a guard, and became known as the Soledad Brothers. While in solitary confinement he wrote two books, the first, Soledad Brother, is comprised of letters to his lawyer and became an international bestseller. The cover to the left is the mass-market paperback edition that was very widely circulated. (A slightly different cover was published on a later edition, with two boxes at the bottom, one with the image of Jackson, one announcing new material inside.) The image of Jackson walking cuffed and chained became an icon of the era, not only reproduced on his books, but in underground press articles about him. And notice the stencil font for the titling, near ubiquitous for prison-related titles.

If there was a US hardback edition of Soledad, I haven’t been able to find it, and have never seen the cover. The UK paperback on Penguin is to the left, similar in style to the US edition, but with an image of Jackson with bars through his face (campare this to last week’s cover for Berkman’s Prison Memoirs of an Anarchist) To the right is the current US trade paperback edition, the stark and intense black and white imagery has been replaced by a photo tinted light yellow, a smiling Jackson, and a large, white, open sans serif title. The French edition below uses the black bars over a photo, but chooses to illustrate the Soledad Brothers as a group (Jackson is in the middle), and solidifies their collectivity with the use of the graphic of 3 black hands in chains. The Spanish edition on the right is my favorite of the Soledad covers, reproducing the image of Jackson walking from the US paperback, but placing first upright in an orange target, then second horizontally in an additional target at the bottom filled with bullet holes. It’s a great re-purposing of the photograph, and the addition of the orange and reddish tones on a primarily gray background really give the cover both a strong graphic quality but also a depth missing from most of the other covers. Jackson was killed by prison guards in 1971, around the time that his second book, Blood in My Eye, was published. This book is comprised on letters to his younger brother Jonathan, and unlike the humanism and depth of Soledad Brother, Blood in My Eye largely reads as a turgid manual for urban guerrilla warfare. Once again I haven’t been able to track down a hardback first edition, if it existed, but I used to have a Bantam mass-market paperback, but it was stolen by an old roommate, and I’ve never found a copy again! The cover went with the same black design template, but had about a half dozen small photos of Jackson, each with a different facial expression. If anyone has a copy, send me a scan! Below are two UK additions, to the left is the Jonathon Cape hardback. Once again we have a facial shot of Jackson, but the title in red is stamped right across his face and eyes, referencing the title, but also Jackson’s fate. The circle around the title is also mirrored in the post office date stamp at the bottom, a nice reference to the fact that the book is comprised of letters (although I believe the letters were largely smuggled out, so they would never have been stamped by the post office!). The Penguin paperback to the right is completely uninspired, with a plain black and white photo, and the old stencil font again. After being out of print for years, Black Classics Press put Blood in My Eye back out in the 1990s, but strangely used the image from the cover of Soledad Brother on the new cover. The multi-image with the red behind it is kind of cool, but the type-treatment is pretty awful. To the right is another cover I found online, but I’m not sure what edition it is from, possibly a UK version of the Black Classics edition. I like the type-treatment better, but the simple reproduction of the Soledad photo as a graphic doesn’t do much. There have also been a slew of books about George Jackson, his role as a revolutionary in prison, and the mystery around his death. One of the first was Comrade George, by Eric Mann (who went on to found the Labor Community Strategy Center in LA). The cover is almost a hand-drawn version of the Penguin Blood in My Eye, but with a yellow background, which makes Jackson seem much more inviting. The yellow glowing out from behind his afro gives him an almost saintly-character. The Armstrong cover to the right uses another photo of Jackson in chains, but unlike the somber Soledad Brother photo, in this one he’s hamming it up for the camera, with a cigarette and his chin thrust out at the camera. The red and green shadow images of the photo conceptually place Jackson within the pantheon of Black liberation, and graphically add depth to the cover. The cover of Durden-Smith’s Who killed George Jackson? is spartan to the extreme, white bold sans-serif on a black background. The only flourish is the lowercase “k” in killed, maybe attempting to point to the controversial details of exactly how Jackson died, and at who’s hands. And to the right, a French cover ties Jackson to Angela Davis, and uses her more famous image instead of his. These are the only two covers I’ve found that do not feature an image of Jackson on them. To this very day the spirit of George Jackson still lives. We as a people have been blessed beyond imagination to have had this strong Black man in our midst, his legacy must endure throughout the ages and ring in the ears of every Black man, woman and child forever! Let not his death be in vain nor ever loose its meaning or purpose.