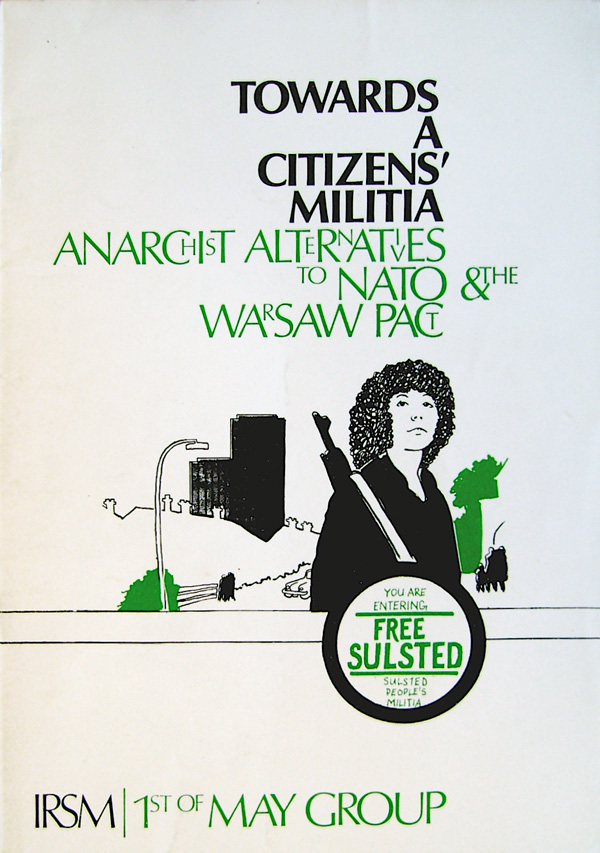 Here’s the second half of the remaining Cienfuegos Press covers. The image to the left is the cover of Towards a Citizens Militia. It seems so audacious now (and maybe did back in the 80s, too), but as the title says, this pamphlet purports to illustrate “Anarchist Alternatives to NATO and the Warsaw Pact.” That’s right, anarchist counter-military strategies to neutralize multi-national military organizations! I’ve always loved the simple black and green illustration and the type, particularly the letter arrangements in the subtitle.

The quality of the cover design definitely faltered towards the end of Cienfiuegos’ run. 1981’s books are all over the place. The Towards a Citizens Militia cover above is great, and I also think the Barclay’s People Without a Government cover is nice, I like an all-black cover, and the scattering of red figures is a simple way to illustrate the title. A cover for this book today would inevitably forgo any attempt at illustrating the concept (which is exactly what happened with the later edition published by Kahn & Averill—who also co-published the Cienfuegos edition) or have a smudgy photo of anonymous indigenous people from somewhere.

I’m not sure what to make of the cover for To the Honorable Miss S…? The illustration is split between an awkward portrait drawn from a supposed photograph of the author, and a set of images in a window pane, which I assume are supposed to in part be telling us something about the books content, but that’s a stretch. The majority of the cover is taken up by the title in an old-timey pirate-style font on top of a light to dark blue fade. Ughh. Richard Warren’s comic edition of Bakunin’s A Critique of State Socialism has a nice graphic cover, it could pass for a 1970s underground comic. The image below is actually from an Australian reprint I have, but I think the original was printed on white stock, not red, but had red and blue spot color printing along with the black comic outline. Next to that is Marcus Graham’s Marxism & a Free Society. The cover is well-designed for a political pamphlet, 3 spot-color printing, with Marx’s head emerging out of a crowd. Finally, The Poverty of Statism(1981) cover below is a trainwreck, all the designers must have been out of the office that week. The graphic representation of the clocktower makes no sense in relation to the content/title, and then the cavalcade of fonts appears designed to produce a headache. The main title in Cooper Black is strange enough, but the all caps vertical layout of STATISM adds to the weirdness. Then the subtitle font is so ornate as to push the limits of readability.

I’ll finish up with a couple bonus items! Cienfuegos Press was largely run by Stuart Christie, but it was a product of his work in the UK Anarchist Black Cross (ABC)/Blag Flag Magazine with the Albert Meltzer, Miguel Garcia, and others. Meltzer had run an anarchist publishing venture in the 1960s called Coptic Press, and Blag Flag had launched a pamphlet publishing wing in the 1970s called Simian Press. Cienfuegos took over from Simian and attempted to put inexpensive anarchist publications into circulation beyond the anarchist milieu. Cienfuegos was consistently racked by financial problems, which led to some innovations, like a book subscription service (which was picked up by AK Press, and now has spread across the gamut of political indy-publishing, with AK Press, PM Press, South End Press, the Feminist Press, and Microcosm Publishing all running variations on a subscription system). After Cienfuegos collapsed, a follow-up press Refract was launched, but it only lasted a couple years. Next to it is the cover of a 1981 Cienfuegos Press Prospectus, published in an attempt to raise capital to keep the press running. Although not attributed, I suspect the cover is designed by Clifford Harper, as it looks like his work. Below that is the center fold of the Prospectus, an illustrated “Share Certificate.” I only have a photocopy of the Prospectus, so I apologize for the gap in the middle of the page.

Below that are a couple of the Refract titles, a reprinting in 1985 of Joseph Lane’s Anti-Statist Communist Manifesto. Next to that is Christie’s dossier on Italian fascist Stefano Delle Chiaie. The yellow and dark blue are actually quite striking, and the imposing sun glass-wearing Delle Chiaie standing in front of the frame is scary enough on the cover, never mind the creepy details inside. I still haven’t tracked down copies of Charlotte Wilson’s Three Essays on Anarchism (1979), J.R. White’s The Meaning of Anarchism (1981), Ronin’s High Intensity Subversion (1981), or Rudulf Rocker’s Milly Witkop-Rocker (1981), but I will eventually, and I’ll through them in with a post on Simian and Refract Presses, sometime in the future.