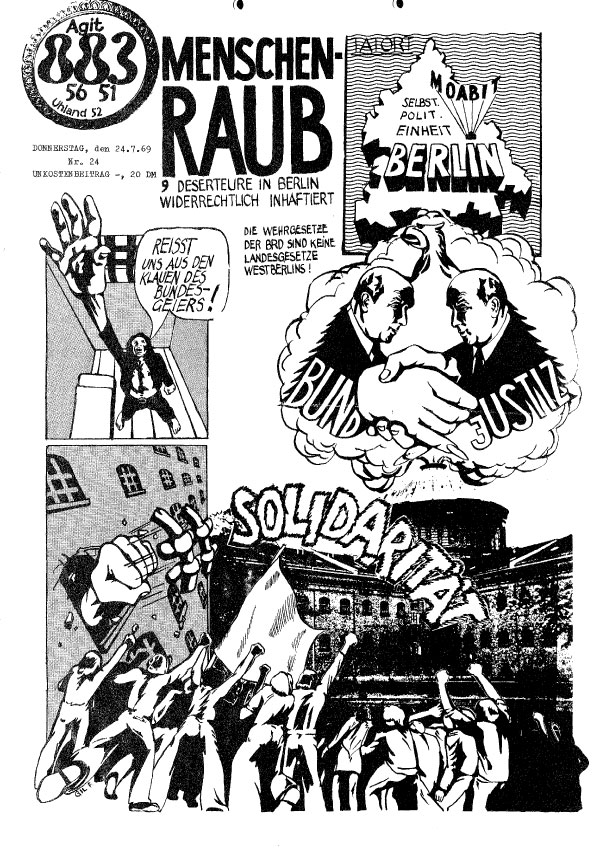 Here’s week three of covers of the German anti-capitalist paper Agit 883. This week I want to look at the covers that use the conventions of popular comic books to convey political ideas. Although there was a huge alternative comics scene that developed in the US in the late 60s, it was often more challenging aesthetically than politically “radical” in content. Outside of Spain Rodriguez and a small number of other artists that did some comics about political histories (such as those in Anarchy Comics), the U.S. was much more counter-culturally identified. It appears as if Agit either borrowed clearly political comics for a number of covers, or had a comic artist in their crew (issue #24 to the left is a good example).

This has been a crazy week, with much time spent at the Wall Street Occupation, so I’m going to leave it at that for now, and mostly let the covers speak for themselves. It is unclear if the image on the cover of issue #49 below is a panel from a larger comic, or a poster-like image drawn in a comic-style, but it is a great self-image of the perceived role and power of the underground political press. The aesthetic of the cover of #62 appears to be influenced by Black Panther artist Emory Douglas, but I’m pretty sure it isn’t actually one of his images. I would guess this image was lifted from an U.S. context, illustrating the policing of the university (where students are hanging banners of Mao out the windows…). If I were a Teenage Mutant Ninja Turtle, now I’d say “Koawubnga, dude!”