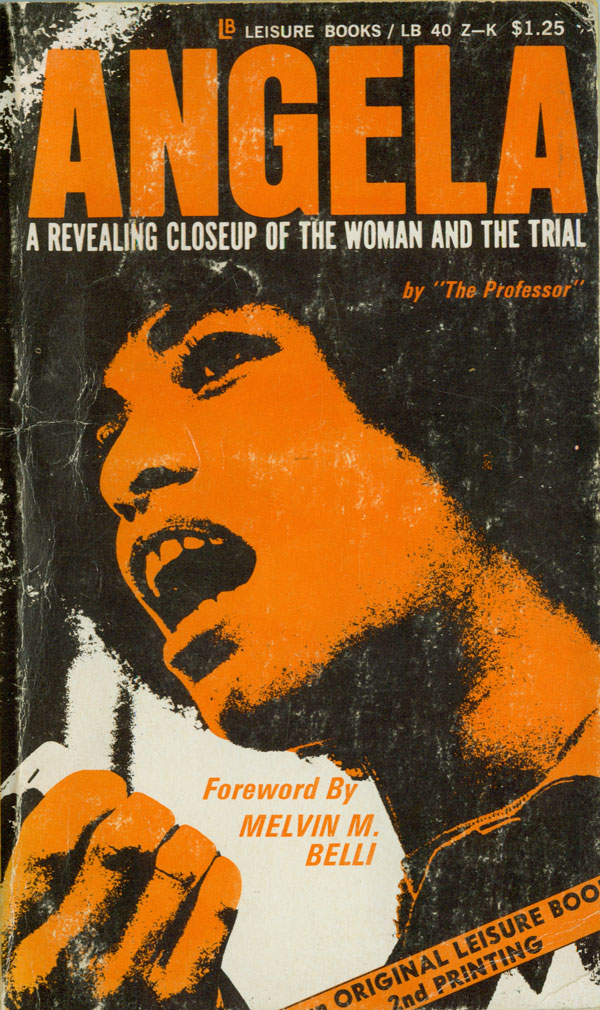 Here’s the last hurrah of the Angela Davis covers (pending any great ones y’all might send in to me!), a collection of books by other authors about Davis and her trial. I found my first copy of If They Come In the Morning, and got turned on to Davis and her prison-activism, when I was a young, budding activist working with the Anarchist Black Cross in 1993. I picked up that book in a store in Texas while on a cross-country trip (along with a copy of George Jackson’s Soledad Brother). Soon after I was introduced to the flip side of representations of Davis while digging through a strip mall book exchange in Massachusetts. Amongst the pile of Harlequin Romance novels I found the copy of Angela by “The Professor” on the right here (Leisure Books, 1971). This ghost-written book is pure exploitation, an attempt to cash in on Davis’s fame—which I would suspect was successful to some extant since copies of this book are much easier to find than If They Come . . ..

This is the second edition, using the same photo as seen on the Italian edition of The Black Revolt/If They Come I looked at last week (HERE). It is even the same black, white, and orange color scheme, but with the orange inverted as skin tone instead of background, the cover becomes more lurid. The giant ANGELA at the top and the orange face grab the viewer, making for a great design.

The first edition (below left) is much less convincing, and we can see why they quickly rushed out the much more sensational cover above. The photo seems almost blurry, as if it was shot surreptitiously, but that sense of immediacy and sneakiness can’t compensate for an otherwise unappealing image. The red spot color is completely under-utilized, a stark contrast to the great use of orange on the later cover.

Leisure Books was largely a true crime and horror imprint which has just been launched (this is only their 40th book), so these editions are interesting representations of both the growing genre of non-fiction pop culture writing about crime and criminal, and how political struggles engaged in violence got shoe-horned into this thing called “true crime.”

The UK edition of the book was retitled Angela: Portrait of A Revolutionary and was published by Sphere, a slightly more reputable mass paperback press. The shady name of “The Professor” doesn’t show up on the cover, and “portrait” is much more objective sounding than “revealing closeup.” They also seem to have learned from the U.S. covers, sticking with the orange, and using a much more dynamic photo. Even the slab serif type seems weightier and a bit more dignified than the tall sans serif of the Leisure editions. (This cover was sent to me by my UK book cover buddy Ret Marut. Thanks, Ret!) At the same time, a more serious and sympathetic (though possibly more biased) look at Angela was produced by her friend and Communist Party U.S.A. (CP USA) comrade Bettina Aptheker. The Morning Breaks: The Trial of Angela Davis (New World Paperbacks, 1975) also has a more nuanced cover. Davis is smiling but looking down, she looks comfortable, not rigid in struggle. Orange is once again the dominant color beyond black and white, and it is used successfully to highlight and balance Davis’s name with the title and to graphically represent the sun burning through the clouds in the morning. The photograph is attributed to Jill Krementz, but the design is uncredited, like all the New World Paperbacks, and most Communist publishers more generally (though not as a progressive political gesture, but instead a failure to recognize the labor as being meaningful to politics).

The book was long out of print, but in 1999 it was republished by Cornell University Press. The new edition has an appropriately post-modern cover, a 70s afro-ed image of Davis is balanced with a much more contemporary type treatment. The orange is nodded to, but a deep, rich magenta is the dominant color, sepia-toning the image. A scrappy bar of of this magenta backgrounds Davis’ name, ensuring it is more prominent than the author’s, just like on the original. This bar also recalls the sky on the original cover.

Politically, the book design is interesting. I assume “Morning Breaks” is a nod to a positive resolution of “If They Come in the Morning,” which—like the cover photo glamour shots—isolates Davis from the other people caught up in her trial (Ruchell Magee, the Jackson Brothers, other Black Panthers), none of whom had her middle-class professor credentials, and few of whom escaped the early 70s without being murdered or imprisoned. It is hard to not see this as a CP USA blind spot, with the victory of Davis being far more important to the Party (and therefore “the struggle”) than the loss of dozens of other activists and revolutionaries. Another popular biography of Davis is Who Is Angela Davis? by Regina Nadelson. Although published by Peter H. Wyden (1972), the red, black, and white cover with its inset photos and large title looks like a bit like a Trotskyist pamphlet. The Argentine edition from 1977 (Ediciones Grijalbo) is much, much, more interesting. The reds and oranges are replaced by a rare, cool palette of blue and green, and Davis’s photo is a less familiar one. She’s wearing glasses, her teeth are more prominent than usual, and her necklace is so tight, it appears as if it could be the cause of her green coloring. The designer was given much more leeway than would ever have been afforded them in the U.S., and we got a more interesting and funky cover because of it. The next installment in the mass market paperbacks is Charles R. Ashman’s The People vs. Angela Davis (Pinnacle Books). If the giant ANGELA DAVIS on the cover wasn’t enough to sell it, they made sure you knew how important it was to read by running “Trial of the Century” across the top. This feels like cover by committee, with a different person in the process demanding each visual element, the least of which is the weird illustration of Davis, which—with it’s gazelle-like neck—looks like a drawing of a model posing as Davis.

More in the vain of the Aptheker book is Klaus Steiniger’s Free Angela Davis: Hero of the Other America (National Council of the National Front of the German Democratic Republic, 1972). This is East Germany’s salvo in support of Davis, Steiniger being a critic for the publication Das Volk. The cover is uneventful, but the publishing tag is hilarious. Nothing like state Communists to come up with the most amazingly bureaucratic organizational names. If East German Communist hacks and anonymous “professor’s” could cash in on Davis’s fame, why not the actual jurors in her trial? Maybe that’s unfair, because whatever Mary Timothy was thinking in writing her memoir of being the foreperson at the trial, her publisher certainly didn’t successfully exploit it. Both covers of Jury Woman (first edition on Emty Press, 1974, on the left—second edition on Volcano Press, 1976, on the right) are completely forgettable and far from sensational. The second edition has a bit of modernist charm with the simple black and white type-treatment on a red background. Black journalist and Panther-sympathizer Reginald Major also wrote a book about the trial, Justice in the Round (Okpaku Communications Corp., 1973), with a cover about as exciting as Timothy’s. J.A. Parker’s Angela Davis: The Making of a Revolutionary (Arlington House, 1973) fairs better. The illustration that dominates the cover is actually quite striking and attractive, pulling in the viewer far more than the apparent afterthought squeezed onto the cover of Ashman’s book above. And to round it all out, two oddities. First, a cover for the Angela Davis-themed contribution to the “Outstanding Personalities” series by SamHar Press, which asks the curious question: “Traitor or Martyr to the Freedom of Expression?” These books could only have been produced for educational institutions because based on the cover, it is hard to imagine anyone in 1972 picking it up at a bookstore and answering in the affirmative to the much less curious question: “Is this worth reading?”

And last, a cover for a French book I found online that I can’t make heads or tales of. It appears to be by Claude May, and is possibly a script or some sort of document related to a Jean-Daniel Simon film entitled L’Enchainement starring Angela Davis? The only problem is that such a movie doesn’t appear to exist. To add to the mystery, Claude May was a French actress from the 40s and 50s, who also wrote for TV, including the show Cinema 16, which was directed by Jean-Daniel Simon. So possibly this was a script for an episode of the show staring Angela Davis that was never made? Anyone else have any ideas? Angela Davis, l’enchaînement is a French documentary from 1977, not released on home video and not referenced on IMDb. It was directed by Jean-Daniel Simon. http://www.cinemaofsoul.com/angela-davis-the-sequence-of-events

Format Magazine has release their Top 10 Street Art Books of 2008, and Reproduce & Revolt is at the top of the list! Check it out here.

While generally bored by recent street art output (or the lack thereof), I’ve always been a fan of Poland’s M-City, and his interlocking and evolving urban stencil grids of buildings,…