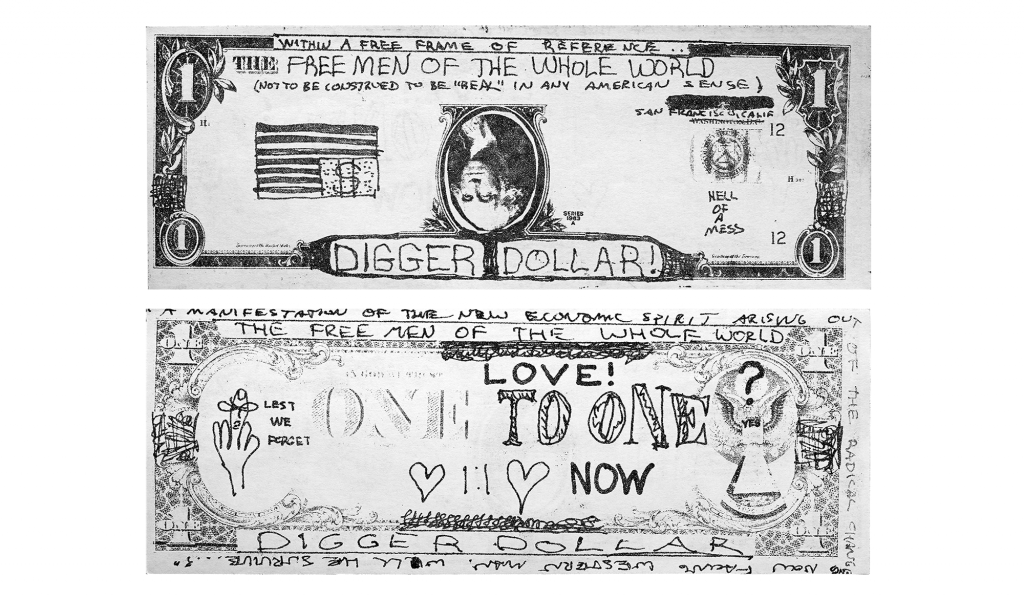 I recently wrote a short essay on the 1960’s San Francisco-based antiauthoritarian group The Diggers, and how they both relate to my way of navigating the world, but also how they predicted a future that has turned out very different than what they would have hoped for. The essay is one of a series commissioned by Paul Schmelzer for the Walker Art Center as an online accompaniment to their current exhibition Hippie Modernism: The Struggle for Utopia. It was posted today on the front page of the Walker website, and you can read it HERE.

In my early 1990s East Coast punk and anarchist scenes, the Diggers were a myth—a composite of militant urban legends, their exploits mixed up with the actions of the Yippies, Black Mask, Up Against the Wall Motherfucker, the Provos, the Black Panthers, King Mob, the Metropolitan Indians. There was a generation gap of radicals in the late ’80s and ’90s; I had no anarchist mentors, no direct line to this troublemaking history we attempted to piece together from a trail of crumbs left in old political pamphlets, fanzines, and proto-Situationist literature.

The idea that these mythic countercultural heroes would fall under the hippie umbrella wasn’t really on the radar. I hated hippies—those affected, lazy peaceniks who fell back on their class privilege to avoid having to engage in what we perceived of as an intense social war: the status quo vs. everything worth living for. We exchanged bell-bottoms and tie-dye T-shirts for double-bibbed Carhart work pants and gas station attendant jackets. We cloaked ourselves in a form of emo-militancy. An ideal of softness, support, and loving within our scene, but all barbs and taunts projected to the outside world. . . .