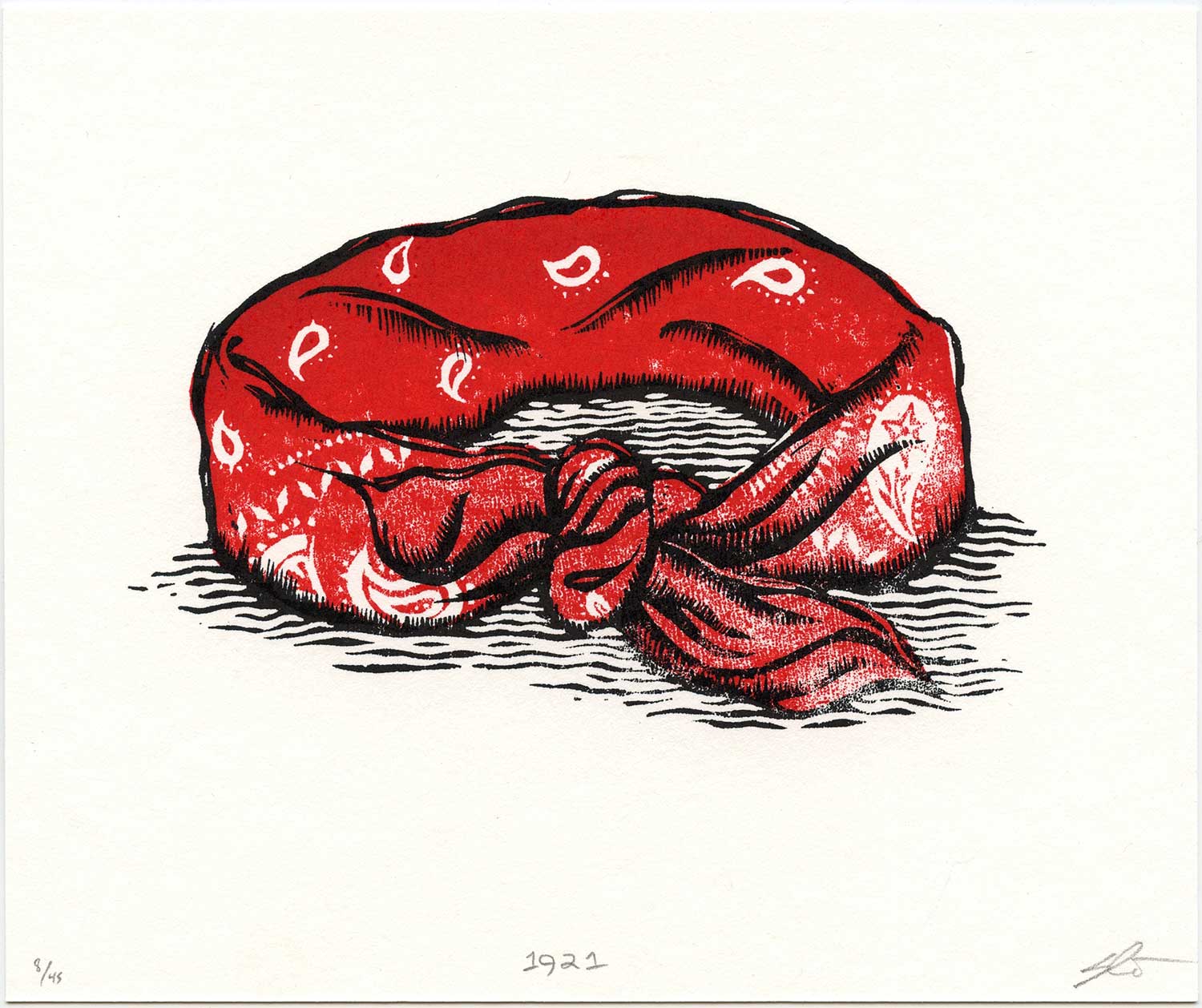 New, second edition! The red layer on this edition is printed from a new hand-carved wooden block…

In the United States, the slang term “redneck” has one of it’s clearest origins in the militant labor union movement in the central Appalachian coal fields at the turn of the 20th century. Specifically, the red bandana became a physical symbol of solidarity among striking coal miners on the 1921 armed “miner’s march” that erupted into conflict on Blair Mountain (Logan County, West Virginia) in August of that year. Those who joined the march wore a range of impromptu battle attire, ranging from daily work clothes to US Army uniforms fresh from those same miners’ overseas service in the first World War. As an act of visual solidarity, and to know who was on what side, these striking miners donned commonly-available red bandanas around their necks — bandanas which have become a distinctly American piece of apparel, always patterned with paisley, a motif with direct lineage to ancient Persian textiles.

On Blair Mountain, these workers fought a guerilla war in the forest for days against a mostly volunteer vigilante army led by regional, ruling class elites in the pocket of the coal industry, who themselves wore white armbands. Those folks called the miners who had finally picked up weapons to fight for their basic human rights “rednecks”, and they would shoot, gas, and bomb them from private airplanes until the US Army arrived to defuse the war.

Elizabeth Catte quotes an anonymous miner reflecting on the ethnic diversity on the battlefield of Blair, the largest armed insurrection since the US Civil War: “I call it a darn solid mass of different colors and tribes, blended together, woven, bound, interlocked, tongued and grooved and glued together in one body.” 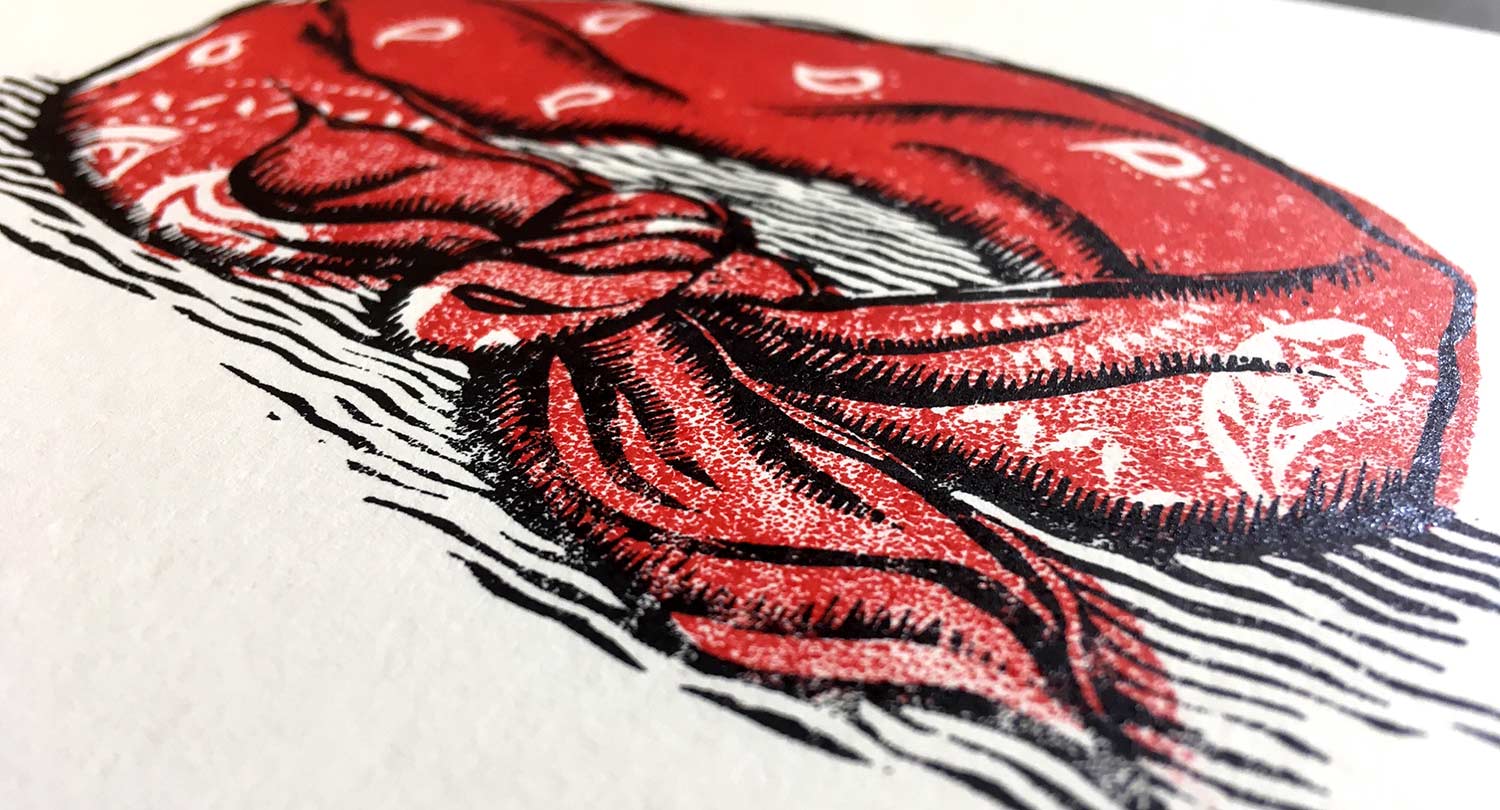 Since 2014, I’ve proudly worked as the Creative Director (and often the Graphic Designer) with the West Virginia Mine Wars Museum down in Matewan, Mingo County, West Virginia.  I helped our team build our independent museum from the ground up. We tell the story of the Battle of Blair Mountain and the whole Mine Wars era through archival photographs and narrative installations using artifacts – many literally dug from the earth by community members and story-keepers. We invite visitors from around the country to contemplate, understand, and celebrate our systemically suppressed history. These stories may have played out in West Virginia, but they are part of the whole struggle of the American working class.

As part of our work, we tell this story about the word “redneck”, in an effort to slowly reclaim the word from it’s modern derogatory, stereotyping use. We work to bring it back to those who wore it proudly as part of cross-ethnic, cross-racial, working-class solidarity. If that seems like a tall order, we’re up for it. 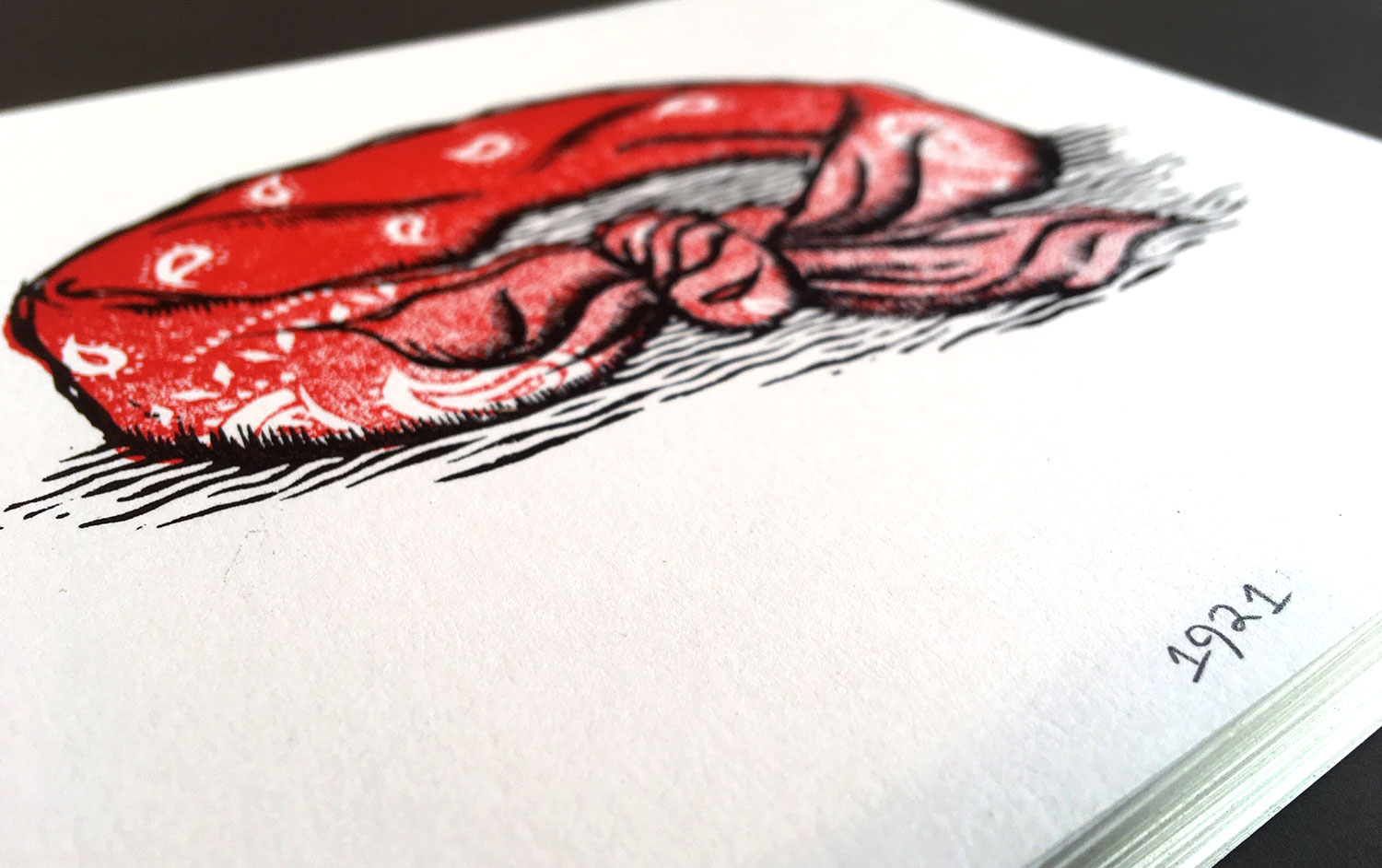 This second edition of 42 was printed on Jeanie, a refurbished Craftsmen Machine Co. Imperial platen press.

This process creates slight variations in each individual print. 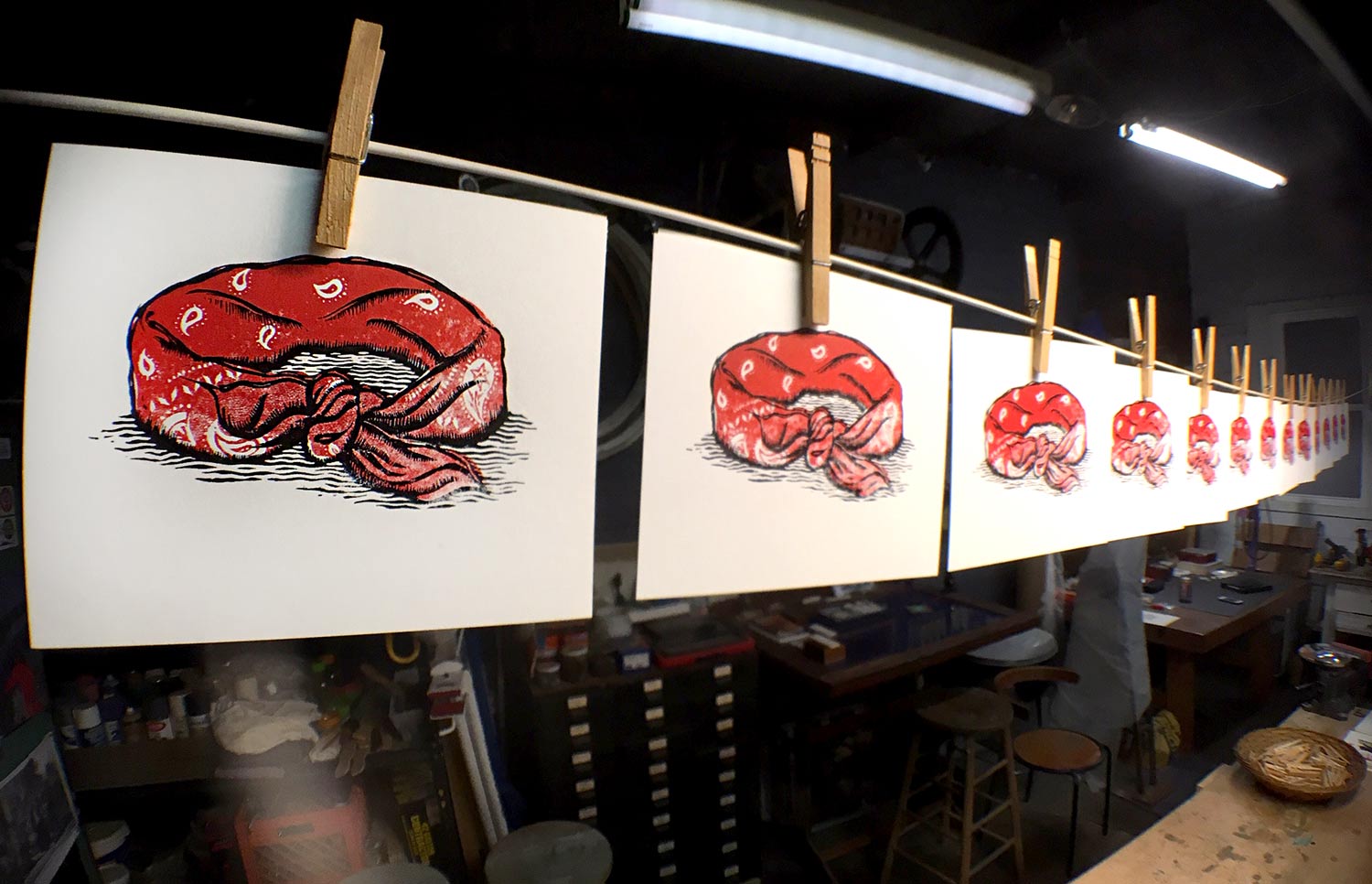 There are many worthwhile books available on the Mine Wars era leading up to the Battle of Blair Mountain, and I recommend these two in particular:

Life, Work, and Rebellion in the Coal Fields: The Southern West Virginia Miners, 1880-1922

The Devil Is Here in These Hills: West Virginia’s Coal Miners and Their Battle for Freedom 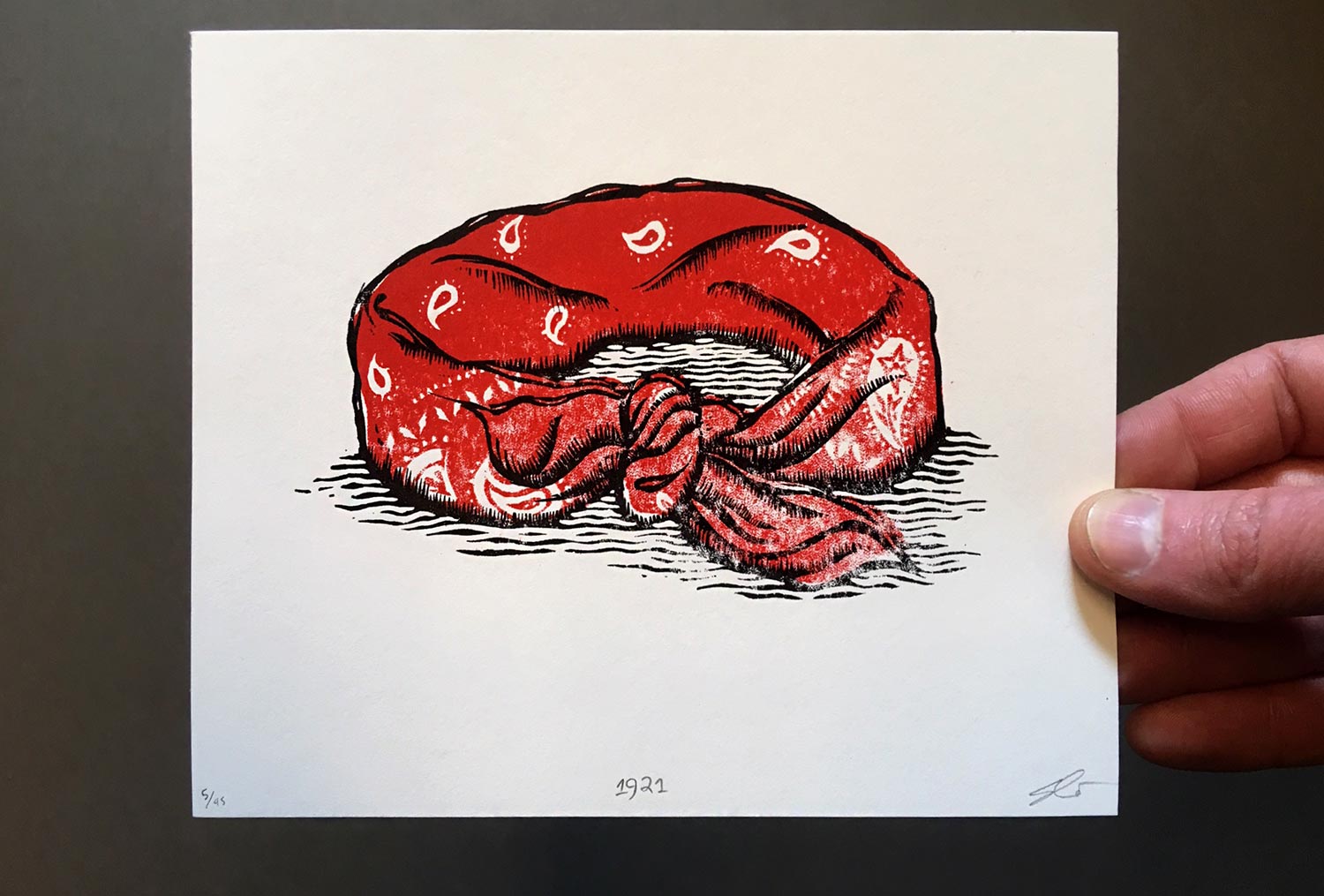