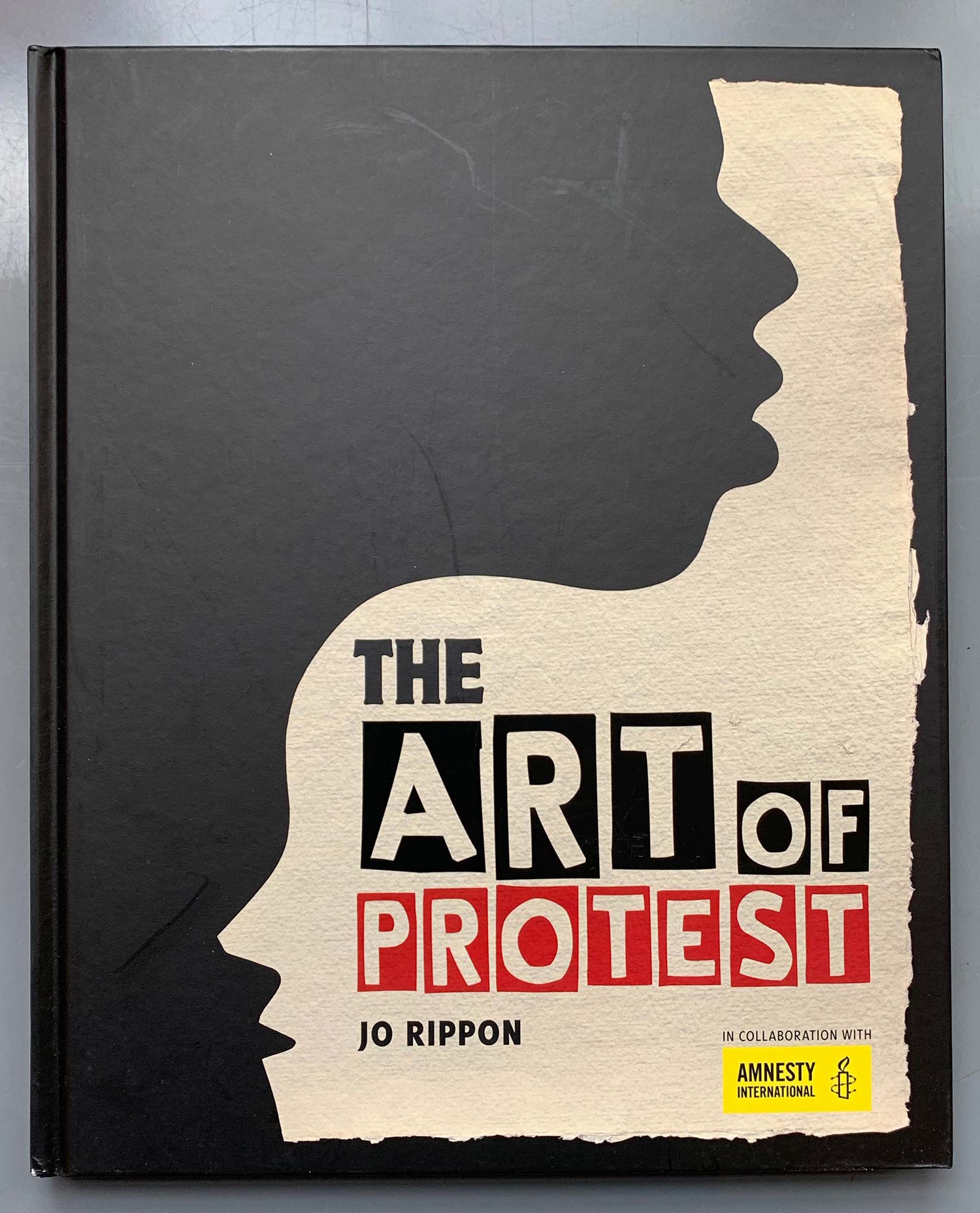 A small glimmer of hope and enjoyment arrived in the mail a little while back, a copy of the new political poster book by Jo Rippon and Amnesty International, The Art of Protest. The US edition was published by Imagine! in early 2020 and features a number of Justseeds artists and fellow travelers, including Micah Bazant, Ashley Lukashevsky, Favianna Rodriguez, Rommy Torrico, Mary Tremonte, and myself (Josh MacPhee). We’re in good company, with a great collection of classic protest posters by the likes of Carlos Cortéz, John Heartfield, Kathe Köllwitz, Ricardo Levins Morales, Ben Shahn, and the Silence=Death Collective.

While the cut-out letter design of the front material and section breaks is a little much for me, thankfully the actual poster pages are clean and easy to read, with clear titling and lots of contextual information for each poster. With potentially over 200 years of posters to cover, the book does a good job of not pretending to be completist. It is limited and knows it, and works well with what it has included, a broad survey that mixes up old and new with an eye towards posters from Amnesty’s own history.

The book is broken into 7 categories that resonate with the present and Amnesty’s mission: immigration, women’s rights, queer liberation, war, solidarity, racism, and the environment. Each section features a nice mix of historical posters and more contemporary examples. Increasingly these poster books are canonizing a set of posters we see over and over again, and while there are some of these “old friends” here, there is also a large enough amount of “new” material (which is both historically old and new) to make things interesting. It is great to not only see anti-apartheid classics, IWW posters, and anti-war works from the 1940s, but to have them rub up against Occupy, Black Lives Matter, and the struggle in Rojova.

In full disclosure, it’s hard for me to complain much, I got a lot of real estate in the book. But regardless, it is overall a nice introduction to the subject of the political poster. Rather than purely aestheticize and fetishize the content (a growing trend coming from increased interest in posters as commodities), it instead places the posters in the context of movements, hopefully opening them up to interrogation and continued relevance.

James Baldwin’s quote that opens up the book—”Artists are here to disturb the peace”—can easily be read as cliché, the kind of pablum that always gets used as an epigraph. But I actually think Baldwin’s statement can also be read as a directive to artists and designers interested in social transformation. In a moment where most of us primarily see our work circulate on social media, it is all too easy to interpret our success, and therefore mission, as being popular—collecting “likes.” I take Baldwin’s statement as a call to the opposite, it is our job to say the things people don’t want to hear, not collect popularity by spoon feeding people exactly what they already want.