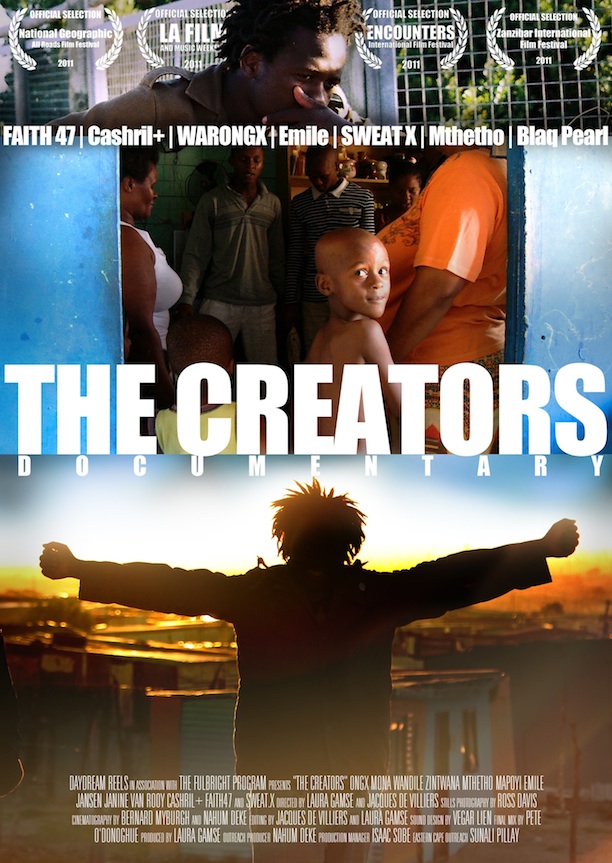 South Africa is a nation rife with contradictions. Most notorious for apartheid, it is now known as the “Rainbow nation” and provides residence to over 50 million people speaking 11 national languages. It serves as a haven for refugees from throughout Africa, yet it has some of the highest murder and rape rates in the entire world. The country could never be described by any one cultural identity. In The Creators, Co-Directors Laura Gamse and Jacques de Villiers intertwine narratives in a multi-plot documentary following artists from all walks of life. Weaving through the lives of Faith47 (street art), Warongx (Afro-blues), Emile Jansen (hip hop), Mthetho Mapoyi (opera), Blaq Pearl (spoken word) and Sweat.X (glam rap), the film culminates in an intertwined story exploring the lives and views of its creators.

The Creators exemplifies the struggles of post-revolutionary nations throughout Africa and worldwide, showcasing the divergent landscapes and perspectives found in societies caught between tradition and westernization. The Creators does not isolate one social issue because the plight of South Africans lies precisely in the confluence of issues – colonialization, westernization, prejudice, disease, violence – affecting and infecting the environment surrounding them. More than a success story celebrating the overthrow of apartheid, South Africa is an intricate web of cultures, each with a unique history and perspective demanding to be heard. A new generation of artists is calling attention to the modern crisis using the skills learned through apartheid resistance. Unsatisfied with governmental reform, these artists intervene on the grassroots level, changing society by demanding that society change itself. An immersive glimpse into the lives of diverse artists approaching South Africa from polarized angles, the film conveys the personal, political, and sociocultural elements behind the art saturating society.