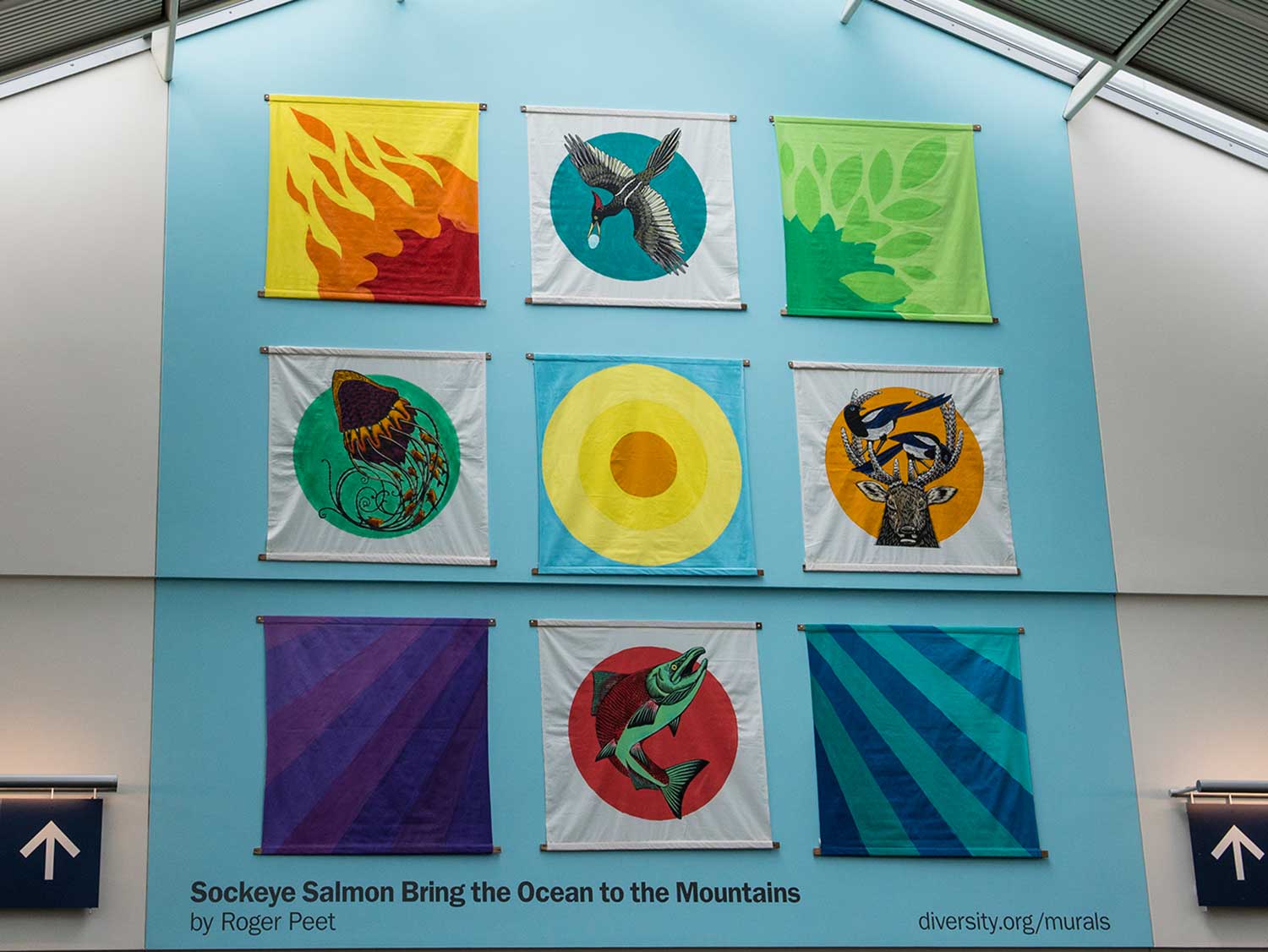 I recently completed the 11th in the ongoing series of murals about endangered species that I coordinate, and this one is a bit out of the ordinary- it’s installed in the D concourse of the Portland International Airport. My colleague Wendy Given invited me to create an installation for a rotating wall of public art, and I thought it would be a great place for a mural about something central to the life, history and biology of the Pacific Northwest: salmon.

Salmon have sustained human societies in the western regions of this continent for millenia, thousands of years of cultural continuity before the arrival of European settlers. In addition to that cultural centrality, the great seasonal migrations of the many salmon species, which swim from the open Pacific up into their small natal streams deep in the heart of the landmass, have historically brought with them a wealth of nutrients and minerals. These enrich the soils and contribute to the health and reach of the vast forests that cloak the landscape, as well as their inhabitants.

The arrival of European societies disrupted the long traditions that indigenous cultures had to the salmon, and their frenzied construction of dams on the great rivers of the northwest did unutterable damage to the salmon and their people- with numerous species and subspecies of fish vanishing entirely into the mists. The myth that all this doozer-work helped to electrify the Northwest and pull the laboring masses out of poverty (as promulgated by the clueless oogle Woody Guthrie) is belied by the state of the Columbia River today- a series of slackwater lakes plied by barges full of grain. The juice is nice and all- but it was the barge traffic demanded by the shrieking praters of the agricultural lobby that drove the damming to it’s annihilatory conclusion.

I wanted to mark that cycle out- the passage of the deep salty weirdness of the ocean up into the high-contrast summer forest of mountainous western North America. What I came up with: nine panels in a three by three grid. The four cardinal points including images of species at various points of the cycle; the medusa of the open ocean, the Sockeye Salmon themselves, the Elk and Magpies of the mountains and the desert beyond, and the woodpeckers in the heights of the tall trees. The corner panels gestured at the water of ocean and river, and at the leaves of trees and the tongues of fire that recycle them on a regular basis- unless, of course, interrupted by the incompetent European policies of fire management that infest our region like ticks, or weevils in the brain of the biological body politic. The mural is part of the ongoing series that I coordinate for the Center for Biological Diversity- if you’re flying into or out of PDX, take a moment to check it out in the entrance to D concourse.