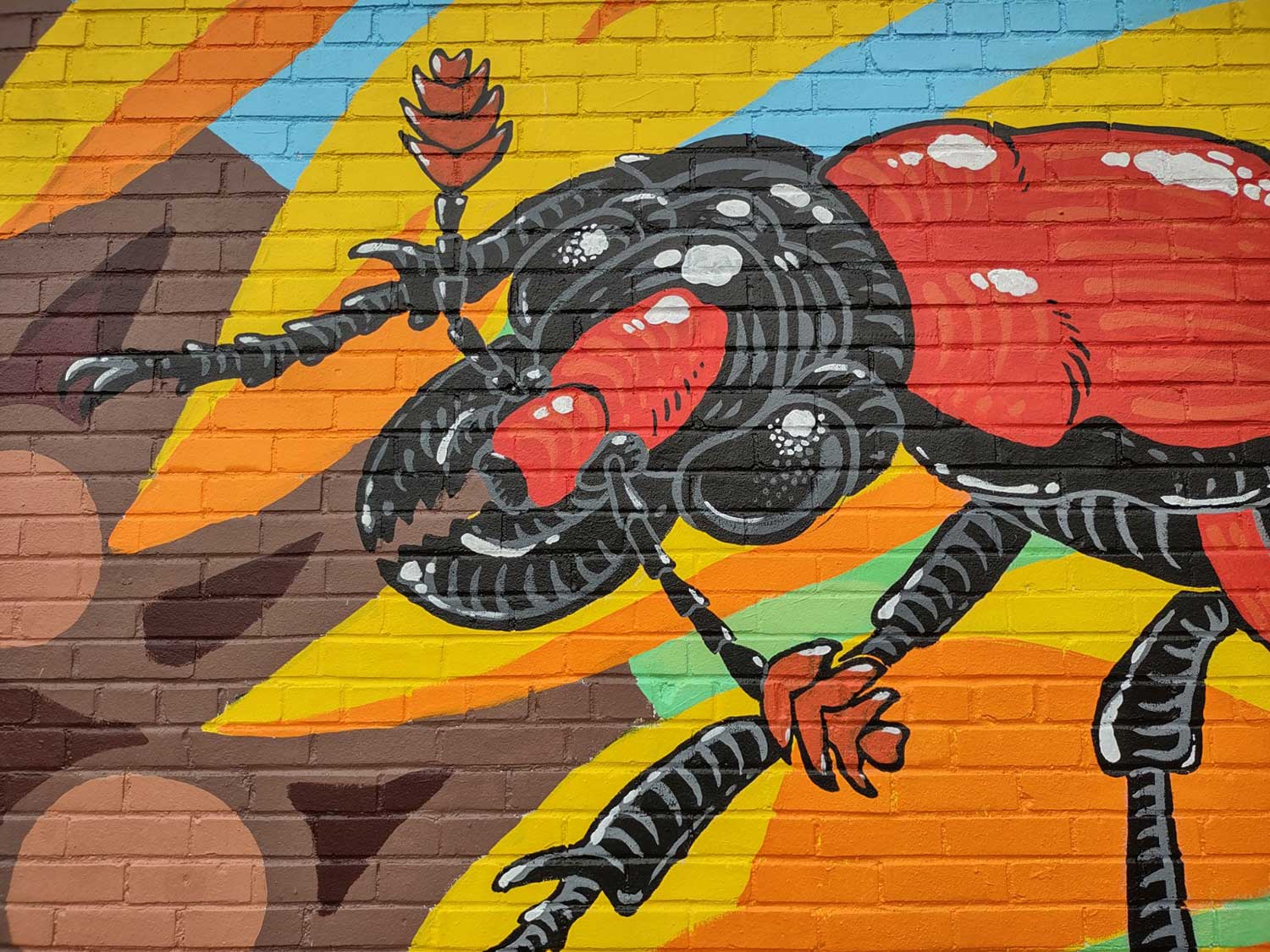 I traveled to Tulsa in October of 2022 to collaborate on this mural with an artist that I’ve admired for a long time. Kathleen Neeley is an illustrator and printmaker from Tulsa whose surreal and organic style I find incredibly powerful and evocative, and I had reached out to her a few years ago to see if she could help us find a wall for the ongoing Endangered Species Mural project that I coordinate for the Center for Biological Diversity. That process was pretty easy- Kathleen inquired with May Yang, owner of Tulsa’s Flash Flood Print Studio, to see if we could paint the east wall of her building in the Admiral Ave arts district, and May was enthusiastically on board.

The subject matter for this mural is special: The American Burying Beetle (Nicrophorus americanus) is a large, brightly colored beetle in the Sylphidae family of carrion beetles. They have a dramatic and interesting life cycle, some aspects of which are very rare in the insect world. Burying beetles use their large, sensitive antennae to sniff out the smell of death, and once they locate small dead animals suitable for their needs, they excavate a hollow beneath them and slowly lower the tiny corpse into the earth. Once buried, the beetle lays its eggs next to the corpse, and once the larvae hatch they take up residence inside the body. What happens next is very interesting: the larvae beg for food from their parents just like baby birds, rearing up and making gestures that stimulate the parents to regurgitate the pre-chewed flesh of the host corpse for the young. This active parental care is extremely unusual in insects!

Burying beetles were once found across the eastern US, but during the past century their numbers have collapsed drastically and they are now found only in isolated relict populations, although efforts to restore habitat and to protect those populations have led to some recovery. It’s not precisely known why their populations declined so severely, but most ideas hinge on the near-total transformation of the landscape of this continent since the arrival of European settlers. The annihilation of the passenger pigeon, whose flocks once darkened the sky for days and whose corpses littered the landscape in enormous profusion, certainly removed a massive source of nest bodies for the beetle as well.

The beetle was protected under the Endangered Species Act for some decades, but has recently been downlisted into the “threatened” category after extensive lobbying by the oil and gas industry of eastern Oklahoma, where the beetle population surveys required by the ESA had hindered fuel development. In the downlisting ruling, a cruel subrider was added stating that the inevitability of anthropogenic climate change would almost certainly drive the beetle extinct in the Great Plains, so efforts to protect it weren’t worth the bother.

We paint these murals to bring endangered species into people’s everyday lives, and to illuminate the biological communities that people share their landscapes with, and without which they would be sadly diminished. Beautiful, charismatic beetles like the Burying Beetle deserve all the love and care that we offer larger and more well-known animals and plants, and assisting their struggle to survive in the world we’ve made is our responsibility.