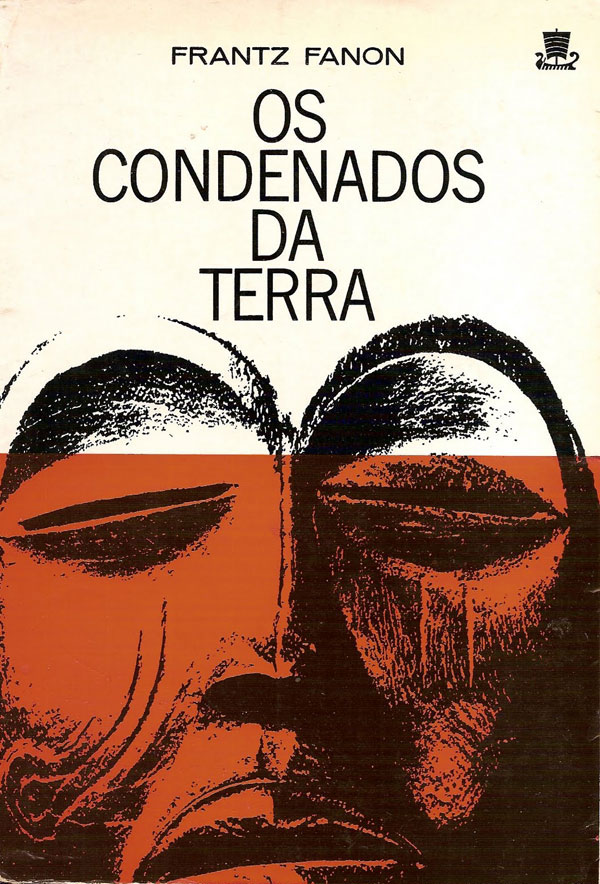 Let’s start off part two of the covers of Fanon’s Wretched of the Earth (read part one HERE) with this beautiful cover from the 1961 Portuguese edition published by Editora Ulizzeia. Aesthetically I find this design stunning, the landscape of the mask flattened by the orange overprint, the strong tall gothic type springing from the forehead of the mask, everything is in balance. Politically it’s a bit less convincing. Although Fanon’s first book is entitled Black Skin, White Masks, the use of a Sub-Saharan African mask on a book about the Algerian anti-colonial struggle seems a bit off. In the coming weeks as I go through all the Fanon titles and their covers, you’ll see how this mask theme keeps coming back, regardless of whether it is appropriate for the specific book or not.

The Mexican publisher Fondo de Cultura Económica has produced a wide-array of Wretched of the Earth covers. The 1963 edition is really strong design-wise, it has the feel of a Cuban or Polish film poster for a Western. The roughly drawn hand reaching up from the right side feels open to interpretation, it could either be a signal acknowledging “we are here,” or a plea to “stop”—both colonialism and repression. The edition from the 1970s continues with the outstretched arm and hand, but multiplying it ten fold. it has a real pop-design feel, a la 70s Cuban posters, or even Push Pin Studios. If the clip art hands emerging from suit sleeves weren’t strange enough (are these the arms of the wretched of the earth?), the lines cutting across each sleeve adds another whole level of weird. In the 80s book design in general calmed down, and specifically the designers at Fondo apparently swung far in the opposite direction of 70s freaky. All the arms have been replaced by a photo of an African mask. Once again its relevance is unclear, and in general the entire cover design is fairly staid and laid back. But not for long, once we get into the 2000s the cover gets pretty weird again, with a glowing purple face obscured by hands. I assume the gesture captured is supposed to be one of sorrow, but it’s quite hard to tell. The type treatment is awful as well, with a nauseating mix of pinks and purples with black and white highlights around the bodies of each letter. Maybe this cover was designed on Microsoft Word? A 1999 Spanish edition by the Basque publisher Txalaparta doesn’t fair much better, it also has some out of the box digital effects like the shadow behind the border and cocked central image. The old school typewriter font is passable, I can live with it, but it doesn’t really match the Gothic that Fanon’s name is in. And on closer inspection, the image doesn’t really fit the context, it seems more like a painting of a group of forlorn European workers at the saddest Mayday march ever.

The first Italian edition (Einaudi, 1962) focuses on a marching column of Algerian fighters, one of the most direct representations of the content of Wretched on its cover. The white and black bars at the top and bottom provide balance, and their level lines interact nicely with the right leaning lines in the rifles in the photo. The first edition above appears to have been an anomaly for the Italian editions, as the two I found that followed (both Eunaudi, one from 1972, the other from 2007) are much more restrained. Thanks to continually improving online translation, I’ve been able to track down some Japanese editions, which is a first. I know almost nothing about the Japanese book trade, so I really have no idea how these stack up to other titles. What little experience I have points to a general clean and controlled aesthetic to Japanese books, somewhat like French and Italian titles, but even more classical. The cover below to the left is a 1969 edition of Wretched by MacMillan Japan, and the one on the right is a 1996 edition from the same publisher. I’ve found three different German editions. The earliest and most interesting is a Rowohlt from 1969. A processed photo of a line up of Algerians is bathed in pink, with nice thick gothic type dropped on top in white and yellow. Unlike the popular Grove paperback from last week, the figures on this cover are stuck in the day to day, they’re frustration building towards the riot scene illustrated on the Grove cover.

A 1981 edition from Suhrkamp is very straightforward. Bold serif letters (possibly even Times New Roman?) spell out Fanon’s name and the title, both in the same weight and type size. An interesting choice since it almost makes all that text one big run on sentence. The minimal yellow text on red background also reminds me a bit of Mao’s Red Book. The recent Suhrkamp edition (2011) is updated Continental style, sans serif text in colorful boxes, likely a house style. One of the real outliers this week is this Hebrew edition. I’m not sure when it was originally published, but it is still available now. Neither abstract nor a representation of repressed masses, the image appears to be a smiling Algerian (or otherwise Arab) boy feeding pigeons. Huh? Editions ANEP is an Algerian publisher, so I had high hopes for their Fanon covers, but the 2006 cover for Wretched doesn’t do much. It lacks the clean lines and simplicity of other French and European editions, but isn’t representative or graphic enough to do much else. The type just sits there, and the hazy figures in the background aren’t strong enough to even demand recognition by the viewer, never mind to actually mean anything. The Turkish edition published by Versus Kitap in 2007 is also dull, plain serifed type on a maroon field with a small inset painting of Fanon. The painting might be interesting, but it is hard to tell because it is so small. Hey- The reason the Hebrew title is such an outlier is that it isn’t Fanon’s book. It is “Once Upon A Country: A Palestinian Life” by Palesitnian academic Sari Nusseibeh and Anthony David.

Wow, so much for the google translation program! I plugged the Hebrew into it and got Fanon, that’s how I found the image in the first place!