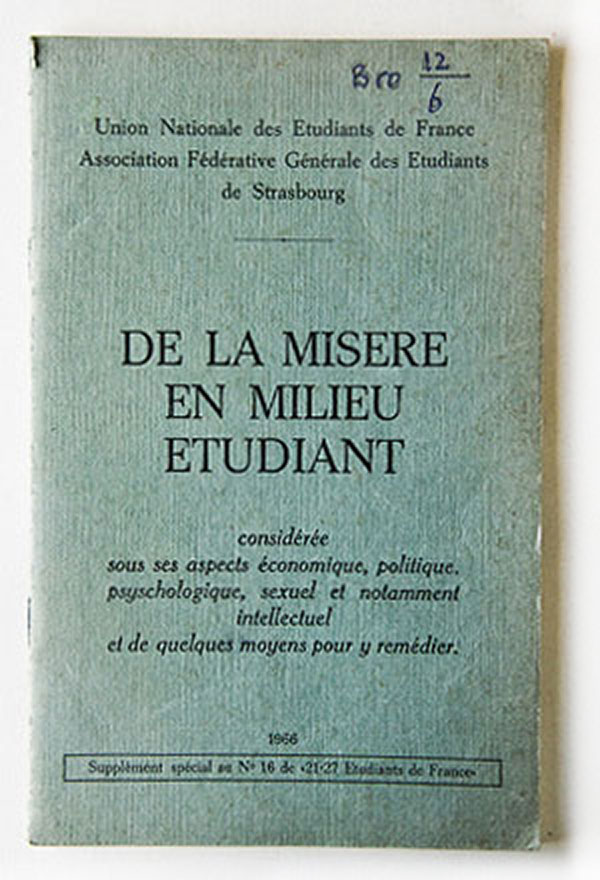 While rooting around Interference Archive looking for student movement books over the past couple weeks, I pulled out a whole set of different editions of what might be the most influential student movement manifesto, De la misère en milieu étudiant, or as known in English: On the poverty of student life. A consideration of its economic, political, sexual, psychological and notably intellectual aspects and of a few ways to cure it. At the archive we have five different editions, but I dug around online and found images of six more, including the initial edition published by students at Strasbourg University outside of Paris (which can be seen here on the right). If I remember correctly, the story goes that members of the French, ultra-left, political theory cabal International Situationiste (SI) approached radicals and SI sympathizers on the student council about publishing the tract, which was initially done in the Fall of 1966 in an edition of 10,000 copies—with university funds. It was ghost written by the Situationist Mustapha Khayati. The content and the funding of the tract was extremely controversial, although since much of the writing is impenetrable to anyone that doesn’t read “Situationist-ese,” I suspect it was the misuse of school money that caused the greater stink. Whatever it was, the controversy only increased the popularity of the text, which presaged the coming student revolt of May 1968.

Once students at Nanterre University kicked off that six week revolt in May, SI members and like-minded students—many inspired by On the Poverty of Student Life, took active part in the struggle. The track was republished multiple times, and similarly witty if theoretically dense poetics were scribbled on walls across Paris. Meanwhile back in New York City in 1967 the text was translated and published in English, with the New York added to the authorship tag line: “By some members of the Situationiste International and some students from Strasbourg and New York.” The design is exactly the same, black sans serif text on colored stock—simple continental book design. 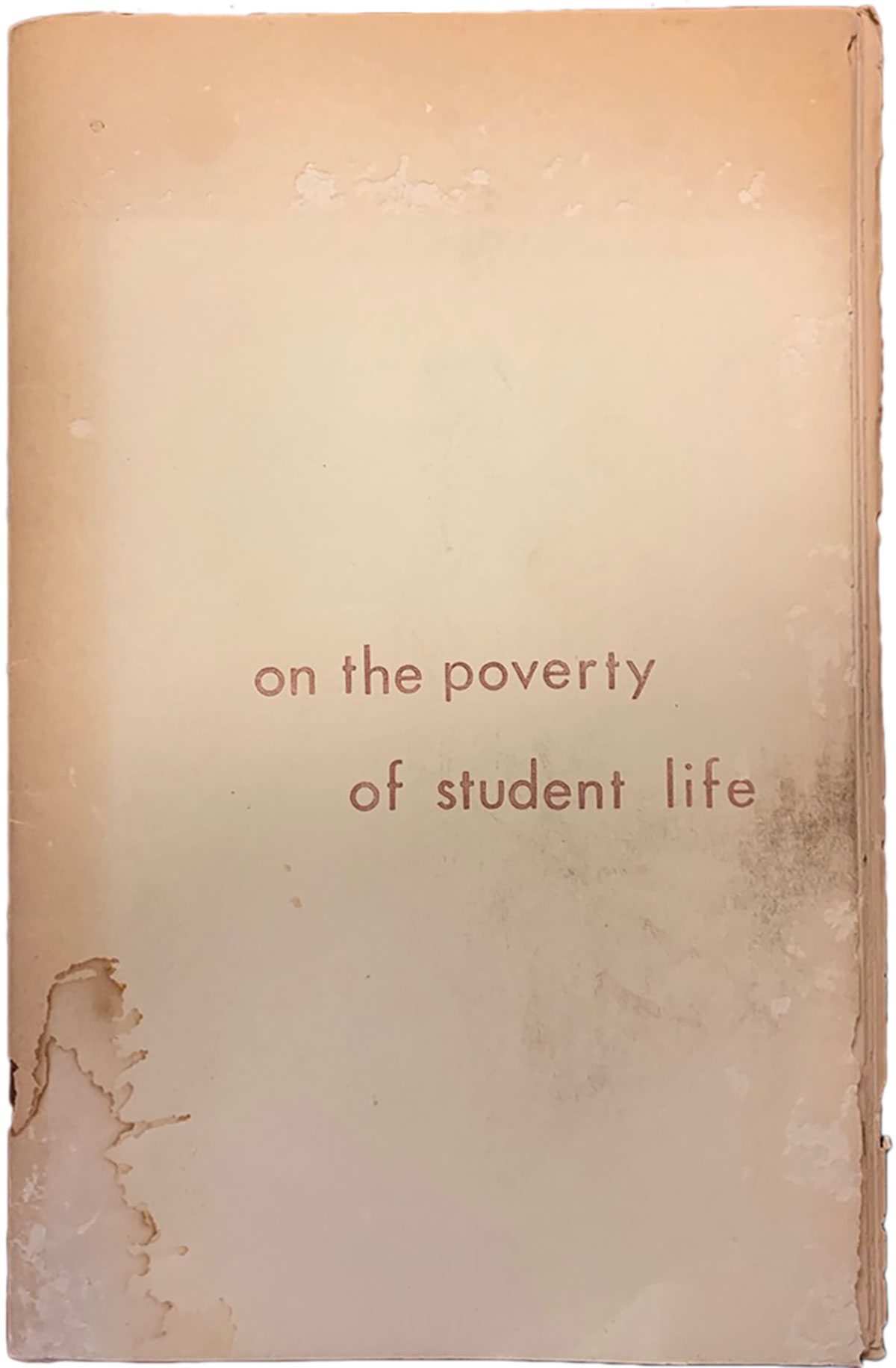 A little bit later, post 1968, three more English editions were published. In 1970, an anonymous group from Berkeley published another edition with a no-frills cover, not even the subtitle. Next is by Point Blank!, a proto-Situationist group from the Bay Area who put out a magazine of the same name. The cover is the first edition I’ve seen with an image, a series of bored students stacked in a lecture hall which likely is intended to recall the 3d glasses/movie theater image used on the popular Black & Red edition of Guy Debord’s Society of the Spectacle. Even the type is set similarly, and in a similarly bold serifed-font (Clarendon?). Since the Point Blank! edition isn’t dated, it is also possible that it was published before the Debord book, and Fredy Perlman (the printer and designer on all the early Black and Red publications) borrowed the design from them.

The next English edition is back to the continental, practically a Swiss interpretation of the initial traditional design. The title, subtitle, and authorship are all set in lowercase Helvetica and slammed hard right, black type on blue colored paper. I haven’t seen this actual edition, so I don’t know the date or where it is from, but I suspect the early 1970s, and possibly from London. In 1985 the anarchist publishers Dark Star and Rebel Press teamed up to republish the pamphlet again in the UK, and used this exact design, but inverted the text, so that it was white on a field of dark blue. Around the same time these publishers also worked together to re-publish materials from the London-based 1960s pro-Situationist group King Mob Echo.

Back to Fredy Perlman, he was present in Paris during May 68, and upon returning home his press Black and Red (B&R) published many situationist-inspired texts, including the first English translation of Society of the Spectacle and then also a reprint of On the Poverty of Student Life. Their edition is much less austere than the others, combining collaged elements of earlier covers and détourned comics from other Situ publications. The long subtitle is dropped, and replaced with the phrase “Ten Days that Shook the University.” The first B&R edition I’ve seen is from 1973, and is printed in blue ink on a yellow cover stock. In 1983 a new edition was printed with a more traditional looking cover printed in black and red, which is less interesting but much easier to read. In 2000, after Perlman had passed away and Black and Red was being run by his wife Lorraine, another new edition was published with a completely different cover. Printed in mono-tone brown on gray paper, an image of Roman ruins is overlaid a series of tall geometric shapes, with the title in solid brown on top. I honestly can’t make heads or tails of it, and if it references the text, it’s gone over my head. The designer is not attributed. This might also be the only English edition currently in print by an actual publisher, but hundreds of different versions circulate in photocopied zine form, most using a variation on one of the earlier covers, particularly the text-only Helvetica design.

I went searching for more current French editions, but found little. The only image I could get was of a design that appears to be for an online-edition, put together by a designer/publisher calling themselves Éditions du Gast. It’s basically a mix of the overall feel of the first edition with a contemporary design update, including the weird need to underline everything for no apparent reason. Beyond that I found a Russian edition, which uses Situationist détourned comics as the primary visual element on the cover. I’m sure their are dozens more versions floating around out there. If you’ve got one that’s interesting, send a photo or scan to me here: josh [at] justseeds.org.

Thanks to Ken Hempel for sending me the image of the 1970 Berkeley edition!