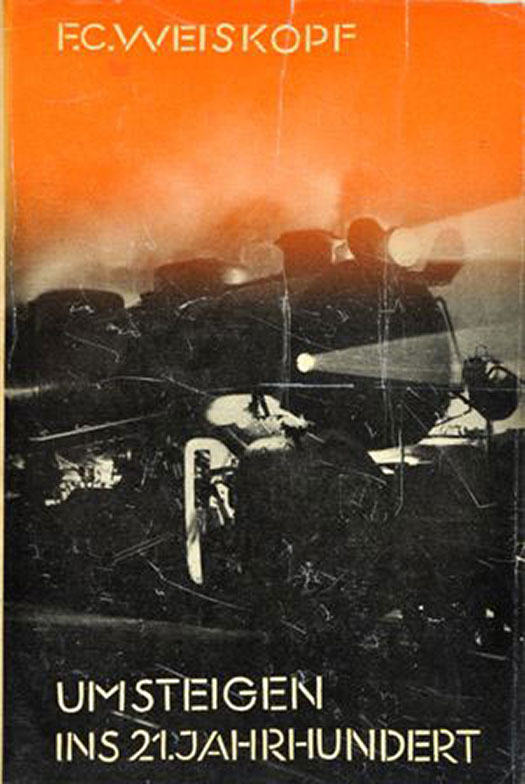 Here’s the next batch of Heartsfield’s Malik-Verlag covers. The one to the right is a favorite, Franz Carl Weiskopf’s Umsteigen ins 21. Jahrhundert: Episoden von einer Reise durch die Sowjetunion. The light on the train is almost otherworldly, and the stencil typography seems to date it as modernist, but is so effective and was so copied by designers in the 70s and 80s that it now reads as timeless.

Below are a nice mock-up version of Alfred Polgar’s Gestern und Heute (1922) and Oskar Maria Graf’s Der Abgrund. The Polger mock-up, and the other mock-ups and draft sheets in this and the next couple weeks’ entries, are from an exhibition catalog published by Hantje Cantz for the 2009 exhibition John Heartfield: Zeitausschnitte at the Berlinische Galerie. I missed seeing the exhibition in Berlin by one week! But at least I got the catalog, which although only in German, is full of images revealing Heartfield’s process, as well as tons of lesser known work. Malik published a number of books by Franz Jung, including these two. On the left is a nice and simple graphic cover for Hunger an der Wolga (1922) and on the right a cool mock-up of the cover for Die Eroberung der Maschinen (1923): And as a warm up to the next couple weeks (where we’ll exclusively look at the covers Heartfield did for Upton Sinclair, and what can be done when a designer gets to work so closely with a single collection of material), here are four (of the dozen) covers he did for books by Ilja Ehrenburg: thank you so much for posting these!!!

I really enjoy seeing the covers. I have long been a John Heartfield enthusiast.

Thanks for the info Nick, the FB page looks great. And thanks for linking back to my blog posts too!