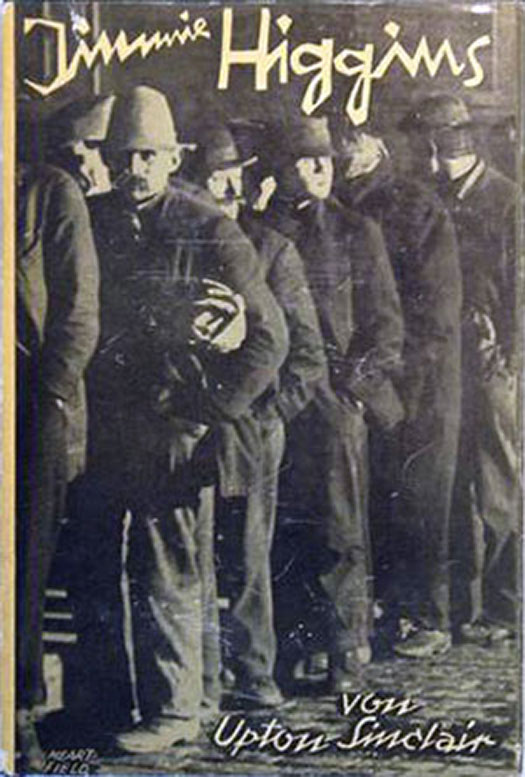 Part four of the Heartfield covers, part two of the Upton Sinclair ones.

Now we’re up to 1928, in which Malik Verlag published three separate Upton Sinclair books: Die Goldne Kette (with a George Grosz drawing laid on top of a grid of images, below left), Jimmie Higgins (nice hand cut lettering, above), and Samuel der Suchende (below right). In 1929 both Boston and Sündenlohn were published. Below are their fronts (on the right), and backs (on the left). Boston is a great noir cover (appropriately given that it is about the railroading of Sacco & Vanzetti), with the dark image, shaded lettering, and stark electric chair on the back. It definitely puts “liberal” Massachusetts in a new light. Sündenlohn is more traditionally Heartfield-esque, with the montage on top of newspaper mastheads. The Grosz illustration on the back is also pretty great. 1930 sees Das Geld Schreibt and Leidweg der Leibe published. Neither quite toot my horn, although the sparseness of Leidweg is nice, and the puppet-master montage on Geld Schreibt is reminiscent of Heartfield’s AIZ work. In 1931 two new novels are released, Macht Man Dollars and König Kohle. Macht Man Dollars has one of my favorite of all the Malik covers, with business men climbing the dollar sign on the cover, something that seems straight out of a Charlie Chaplin film. The back is just as good, with the golden calf looking down on the fighting traders on the stock exchange, asking “Who’s the veal here?” while they push against each other in their wooden cage. König Kohle is not that exciting, but I do quite like the wrap around industrial image, particularly how it lands on the spine. The last book is Alkohol, two versions released in 1932, one with the bottle label attached, one with it montaged out. Black & White, the alcohol brand sued Malik, and a court order demanded their name be removed from the bottle. Always the wise-ass, Heartfield replaced it with the text of the court order itself, with “Black & White” blacked out. In 1938, right before Wieland Herzfelde fled Germany for the United States, Malik put out one final Sinclair book, Autokönig Ford, but I have been unable to find an image of the dustjacket. All in all this is a phenomenally consistent collection of impressive covers by a single designer for a single author. Rarely has there been this kind of sustained attention given to articulating the vision of an author on their book jackets. Heartfield really took advantage of the opportunity Sinclair’s social realist novels gave him to turn his skills as a designer and photomontagist towards an over-arching graphic critique of the U.S. in the 1920s and 1930s. In many ways it reminds me of another European collagist and communist, Josep Renau, who also used his abilities to observe and critique the U.S. in his The American Way of Life series and book. But unlike Renau, Heartfield was still in the thick of battle at home, with the Nazi’s rising to power and the German communists under heavy attack. Rarely do book covers accomplish what these do.

There are a lot of similarities between Renau and Heartfield. The collages and the scripted lettering. I imagine these two aspects must have been a result of the mediums and tools most folks were using during that period.
I also think of many movie posters and magazine articles of those decades with similar aesthetics; Renau’s Mexican movie posters, Spanish civil war posters, and French and Spanish magazines. The latter I recently saw copies at the International Center of Photography, in NYC
As for collages, there were a handful of Renau’s pieces in the Compromiso Y Cultura exhibit, in D.F.
http://justseeds.org/blog/2009/11/josep_renau_19071982_compromis.html
Great and pointed stuff!