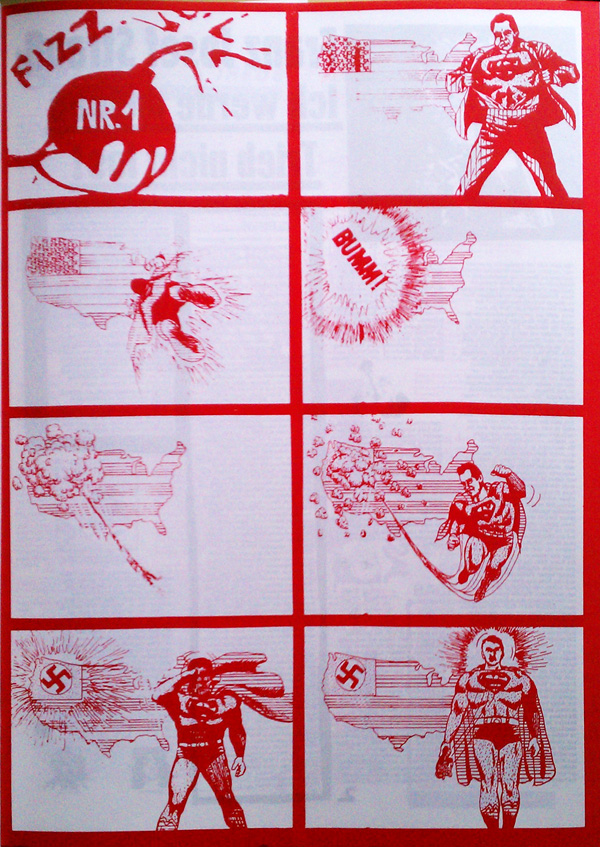 This week I’m going to jump back to Germany in the 60s and 70s, and look at Fizz, an antiauthoritarian political paper which split with Agit 883. Editors from Agit left that paper in 1971, and produced Fizz, which lasted for 10 issues. Since I don’t know much German, my research into this has been limited, but it appears as if one of the main reasons for the split were that Fizz wanted to more whole-heartedly support the RAF. In many ways Fizz looks and feels like Agit, with a head-spinning mix of montage, illustration, news clippings, re-purposed photographs, and other cultural detritus. On the other hand, Fizz embraced more traditional anarchist imagery, with lots of bombs and black and red flags (which is interesting in the context of the split with Agit, as the RAF were far from antiauthoritarian). Each issue also featured a poster in the center, usually honoring a “hero,” from Bakunin to Leila Khaled. I believe most of these issues were banned by the West German government. [I apologize for the low-quality images, I had to take them on a cell phone and try to touch them up. Hopefully at some point I’ll be able to replace them with better versions.] While still fairly amateurish on a design level, there is something about these covers that seems to bridge a gap between the underground comics of the 60s and early 70s and the punk zine that begins to emerge in the mid to late 70s. Some of these covers have more aesthetically in common with a 1978 UK punk zine than a 1969 US underground newspaper. The irreverence and wholesale mixing of type, photo, and doodle-like drawing presages what becomes standard fare half a decade later. There is also something so nice about single spot color printing on a cover, especially in today’s flooded market of high-end CMYK printing and cheap black and white photocopies, with almost nothing in between. Red printing on white stock seems downright revolutionary these days. I also enjoy the playfulness of the evolving bomb logo, starting as a controversial combination of Mickey Mouse hand and classic anarchist bomb, and getting redrawn over and over each issue, changing in style and location. The cover of issue #10 is a departure from the rest, a very pro looking illustration foregrounded in red with a long text behind (possibly lyrics to a rock song?), and the Fizz name almost an afterthought in the bottom right. This image functions much more like a poster than a cover, with its graphic power. I wish I knew the intention and meaning behind this cover. Josh, great stuff. Looks like West Berlin groups to me –whole other ballgame going on behind the Wall at that time. KPD in bottom right of seventh piece is Kommunist Party Deutschland. I’ll see if I can find out something more about Fizz.
thanks!
Joel
(Suma sent me the link.)
jjmorton0@gmail.com

Yup, these are definitely West Berlin papers and groups! Agit 883, Linkeck, and Fizz all come out of the early West Berlin communes and student movement, the same milieu that produced the RAF, June 2nd Movement, and Revolutionary Cells. But beyond that there is little I’ve found in English that discusses the papers in relation to the larger extra-parliamentary left.