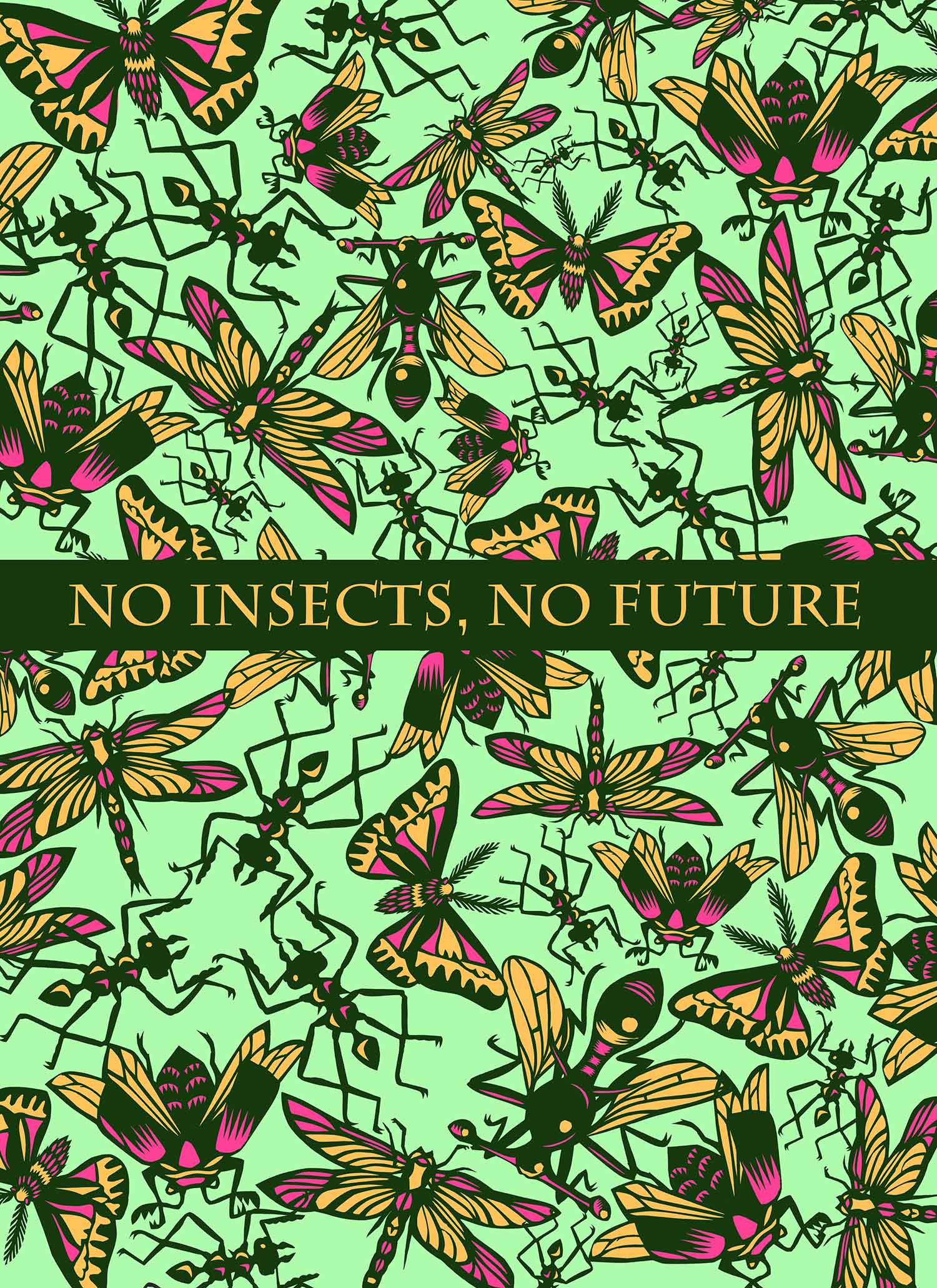 I recently completed this illustration for our ongoing collaboration with the excellent political magazine In These Times, in which Justseeds artists are providing the centerfold posters for their upcoming year of issues. I arrived at this subject matter as a result of developments in the job I have creating murals for a national project called the Endangered Species Mural Project, which is sponsored by the Center for Biological Diversity. I had two murals in a row basically fall through as a result of last minute rejection of their themes: insects. The details are a bit jejune to the fact that the murals didn’t get painted, but it was clear that people were balking because the murals included huge images of arthropods that weren’t bees or beetles. It’s easy to sell people on those two kinds of insect; they have a fuzzy, harmless quality, in addition to the diverse beauty of the wings of butterflies (and to some extent moths) and the obvious and greatly promoted work of pollination that bees do, which enables our agricultural production, and the maintenance of these insane conglomerations of primates that we inhabit. It’s not easy to sell people on other species- as evidenced by the building owner who stated that he had given it some thought and didn’t want his building to be known as the bug building. Or by the board member of the neighborhood business association who vetoed a design because of a feeling that the residents of this working-class, underserved neighborhood lived with insects in their homes and probably didn’t want to see them out in the neighborhood. No matter that these are different insects than those in the mural, just because they’re insects. Here, of course, was another lesson in me presuming, assuming, projecting affection for animals that I value enormously but which for many are emblems of their poverty, of their inability to control their lives, and of the racism and class warfare that daily annihilate the lives of people in this country. The insect is an imposition, another thing to be endured.

Let me be clear: I fucking LOVE insects. I don’t know exactly when my affection and fascination for them first stirred, but it unfolded dramatically during the 5 years that I lived in the forests of south-central Oregon. The profusion and variety of the insects that I lived with and observed every day was exquisite. I built a log-cabin from trees I felled and hauled myself, and a small hive of red-backed bumblebees set up house in the rafters. Jewel-like buprestid beetles appeared on my desk like treasure cast up by the surf. The Rorschach patterns of black and white longhorn beetles staggered the shadows and light in the high summer, and every morning and afternoon a slow flight-pattern of mud-dauber wasps would drift gently past my left ear on their way in and out of my house through the open window, as I sat reading or cutting linoleum.

Is an affection for insects inherently liberal? Where does it live within a movement to seize and reformat the wealth of billionaires? What does a radical approach to the conservation of biodiversity really look like? Is it anything beyond looking towards the total destruction of this way of life, and dreaming and conspiring towards the creation of a new one?  These questions are big and small moving parts of an intractable problem, one which is rushing towards us like the incoming tide.

The world of insects is in crisis. Global populations of the most profuse forms of life on the planet are crashing, crumbling, blowing away. This is a direct result of industrial agriculture and land conversion- the massive use of pesticides and the creation of artificial landscapes makes insect life impossible, and their loss ramifies out into the landscape around them as the new format advances. Birds eat insects, until there aren’t any, and then there aren’t any birds. Insects break down dead matter, till the soil, and form part of almost every food web there is, except for those in the ocean. They pollinate almost everything not pollinated by wind. In their absence, there will be no new plants. The work of growing food will not only be difficult, it will become impossible.

The work to make insects a valued part of people’s everyday life is almost unimaginable, especially in cities where people are struggling to simply survive. The immediacy of a connection to the natural world is a figment of myth at this point, and even that mythology seems like the last dead road of a dead religion. The diversity of insects, like that of all wild life and wild complexity, will seize almost any gap and rush into it to repopulate, if the constraints that it faces are removed. Since those constraints are the direct result of the capitalist mode of relation to the land, the only thing that makes sense is to try to transform this society to make room for a new set of relationships to crawl out into the light. I don’t know if I really believe this is possible, nor do I think we’ll ever be able to engineer a way for mass society to live on the earth without radically simplifying  it to the point of total ecological collapse. It is, however, the only way to keep going and keep making art.