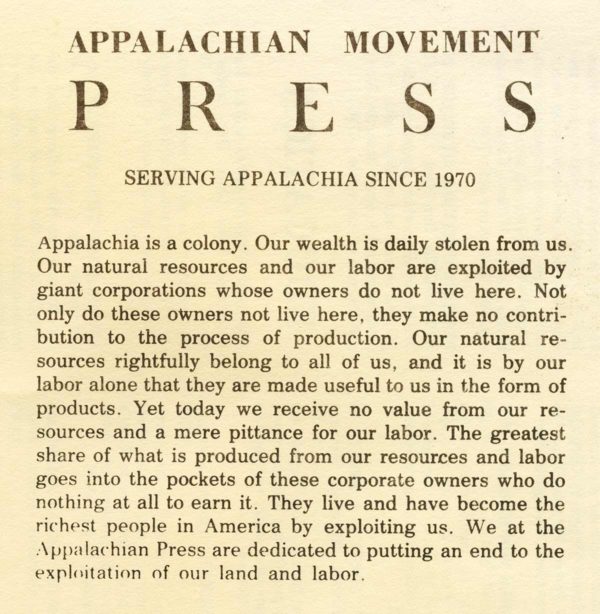 Update (summer 2020): this research has grown to become a book! So Much to Be Angry About: Appalachian Movement Press and Radical DIY Publishing, 1969–1979 will be available on West Virginia University Press in early 2021. Find out more here!

Throughout the spring and summer of 2017, I obsessively pursued the previously unrecorded history of a small activist printshop from Huntington, West Virginia that called itself Appalachian Movement Press. All of that travel, research, and note-taking eventually became the article “So Much To Be Angry About: Appalachian Movement Press 1969-1979”, just published in the newest issue of Signal: A Journal of International Political Graphics & Culture on PM Press.

I’m proud to contribute some radical Appalachian history to a great (and full color!) publication with international scope. You can buy a copy of Signal:06  for yourself right here. Meanwhile, here I’m sharing an excerpt from the beginning of the article. Enjoy, share, and please grab a copy of Signal!

Amid the turmoil of the 1960s in the United States, Appalachian Movement Press (AMP) was born in Huntington, West Virginia, at the end of 1969. Earlier in the same year, a small group of students at Marshall University finally gained college recognition for a chapter of the Students for a Democratic Society (SDS) after four years of battling public uproar and red–baiting. The Huntington SDS chapter did not survive the national dissolution of the SDS as a viable movement, but the local shift in ideas about activism brought on by the fight for official recognition of the chapter, fought by some of the same activists who would go on to start Appalachian Movement Press, was profound.

During this time Tom Woodruff and Dannie Stewart, both organizers of the Huntington SDS chapter, sought to create an activist printing press with others. Appalachian Movement Press would be a radical, independent, regional press with the overall purpose of uplifting Appalachian people to self–determination. Their alternative, grassroots publishing outfit would remedy the lack of historical understanding of Appalachian history by Appalachians themselves, republish and amplify anticorruption journalism from other sources, and act as the primary publishing outfit for the regional organizer and poet Don West.

Working in their time as part of a national growth in activist “movement” print shops, Appalachian Movement Press began in a context specific to a burgeoning Appalachian identity movement, and in concert with organizations that were part of grassroots movements specific to, and speaking to, people living in the Appalachian region. The region itself is an area of grey, somewhat cultural boundaries that geographically follows the spine of the Appalachian Mountains from southern New York to northern Mississippi. The Central Appalachian region, where AMP was focused, includes eastern Tennessee, western North Carolina, eastern Kentucky, parts of western Virginia and eastern Ohio, and the entire state of West Virginia.

With the idea of “getting correct and full information to all Appalachians,” and also to create a viable print shop in service to regional movements that would benefit from a sympathetic regional activist press, Woodruff, Stewart, and others spent six months raising $750 to buy the equipment to begin Appalachian Movement Press. Two thirty-year-old AB Dick offset presses, a binding machine, and other related gear formed the basis for the AMP operation, and their first shop was located in the house of Dave Workman, one of the original organizers. Later a building was rented (for $90 a month) near the intersection of Sixteenth Street and Eighth Avenue in Huntington, which housed a first-floor bookstore specializing in radical literature, with Woodruff, living as a paid AMP employee on subsistence wages, housed upstairs. In 1974, Woodruff found seed money through a local Episcopal church, which allowed them to update and replace some of their aged equipment.

Yvonne Farley, who later worked with Don West at the Appalachian South Folklife Center, remembered AMP as part of “an Appalachian intifada”: a growing complex of leftist activists in West Virginia in the 1970s who were organizing around (or splintering from) federal War on Poverty initiatives, involved in actions against strip mining and corruption in the United Mine Workers of America (UMWA) union, organizing for recognition and treatment of black lung disease (coal workers’ pneumoconiosis), and embracing a newfound Appalachian identity which resisted mainstream stereotypes of the region as backward and challenged industrial capitalism for it’s responsibility in creating and maintaining systemic poverty in the region. AMP was one part of a loose network of activist groups that included dissident, reformist members of the UMWA, Miners for Democracy, the Council of the Southern Mountains, political parties like the Socialist Workers Party and Revolutionary Communist Party, and the aforementioned SDS chapter ushered in by Woodruff, Stewart, and others. As well as creating and distributing their own publications as part of the AMP rubric, they also served as the regional go-to print shop for these organizations, often charging about half the market rate. Mountain Life & Work, the regular magazine of the Council of the Southern Mountains, was their first sustaining bread-and-butter printing contract.

Join me along with Ryan Wong and Josh MacPhee for a Signal release party and presentations of our research at Interference Archive in NYC on March 18! More details here.

Below: scan of one full side of AMP’s 1977 mail order catalog, unfolded. 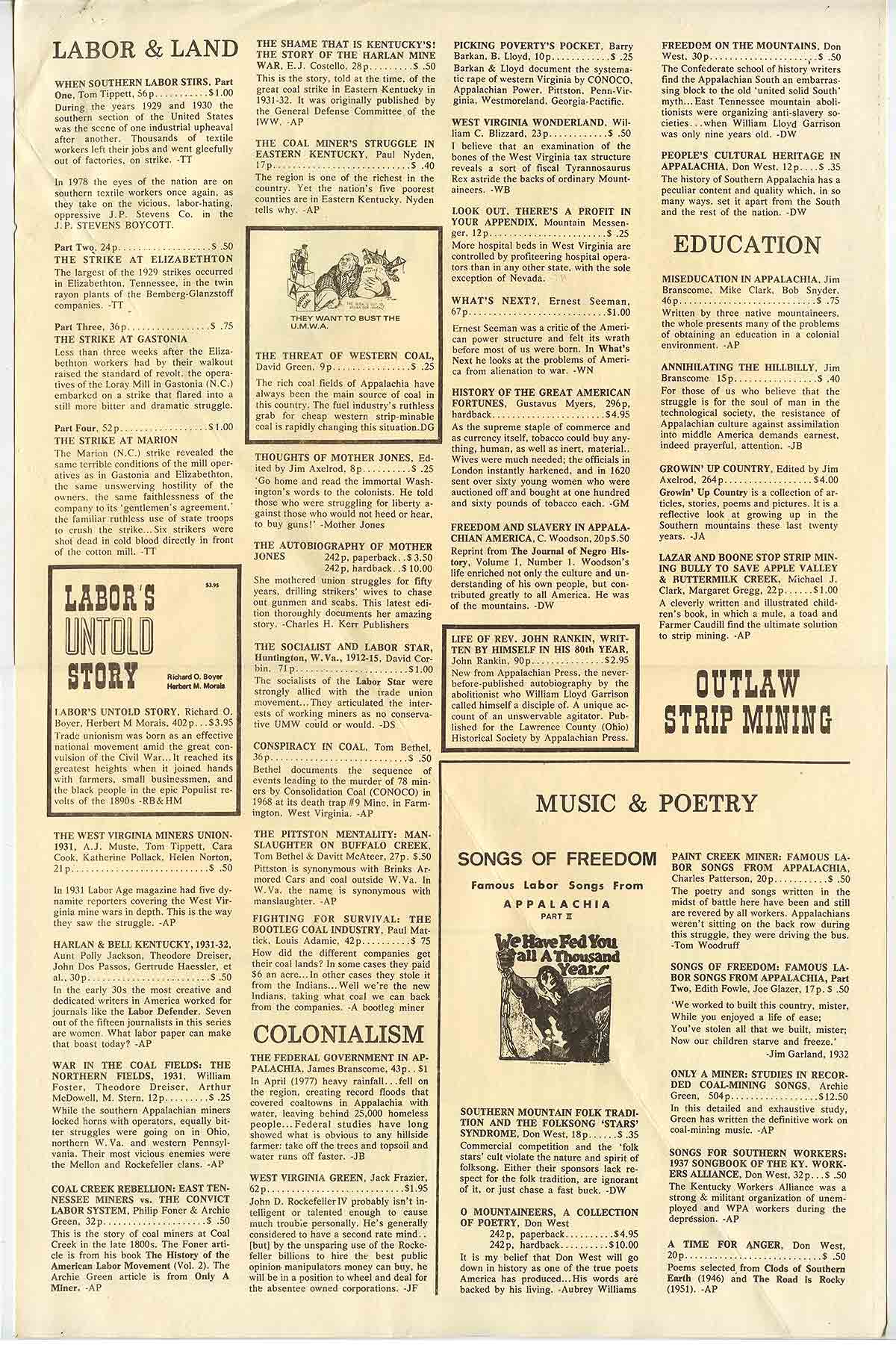