I’ve been scheming with my longtime friend and cohort Stuart Anderson to build a penny smashing machine since some time back in 2007 or 08. At that time, we’d just completed out first collaboration, a kinetic sculpture that kept a tumbleweed rolling constantly on a big platform. Stuart and I work well together — the process is challenging but invigorating, and we come to our collaborations with unique, sometimes divergent, perspectives.

Ambitious projects take resources, of course, chief of which in this case were time and money. In late summer of 2014 we got enough of at least one of those to finally start moving on this idea, and we built a small penny smasher that we presented at various events around Pittsburgh. We used it to roll pennies with little editions of pithy statements, wolf heads, and a couple other flights of fancy. 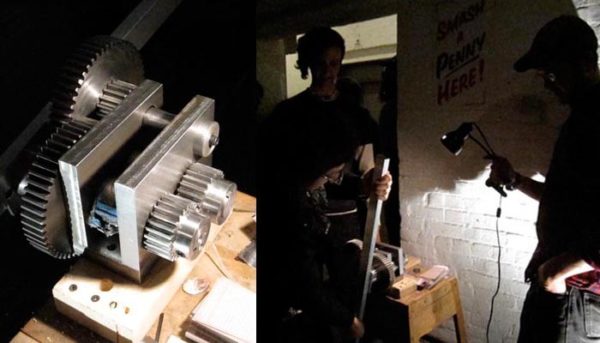 [first public appearance during a film screening/music performance at the Mattress Factory, Pittsburgh]

I kept referring to that first machine as our “prototype”, because what we really had in mind was a machine that was significantly more complex. We wanted to create something that had a thesis behind it, that would provide a “kinesthetic” experience, that would take the expectations you might have of the average souvenir penny smasher and turn them into something more intriguing. We wanted to make a penny press that was, itself, a sculpture. Using the machine would become an experience, and the pennies you rendered with the machine would suggest ideas.

If you don’t count interstate rest stops, Stuart and I think of penny pressing machines as existing mainly in two environments: zoos and natural history museums. We kept coming back to the way that these places categorize information (animals) and display specimens (sometimes dead animals) to help make the world “legible” to people. Since we wanted to focus on the function of a penny press in these environments – what these machines usually do – we were really dealing with the making of souvenirs as vehicles for memories: memory of places you’ve visited, things you may have seen there, a token you might take from the experience. “Souvenir”, it turns out, comes from the Latin “subvenire”, which means “to occur to the mind”, or to make you think. We wanted human interaction with animals to occur to the mind, and our own minds kept turning to extinction and adaptation. The whole time we were hashing out our collective thoughts about this project, Stuart was busy designing and fabricating the majority of the interior mechanism for the machine. The combination of our ideas with a quite precise arrangement of cutomized steel gears eventually became Fauna: A Penny Press. It’s a penny smasher. It’s also a one-of-a-kind machine, a unique sculpture that squishes a penny while embossing illustrations of animals on both sides, creating an experience that

“uses the human desire to identify with wild animals to present questions about how extinction alters our experience of nature, how adaptation drives our ecological future, and how an animal’s symbolic and cultural value can determine its survival.”

And yes, it also churns out your penny looking a lot more interesting than it did before. There are no electronic parts, no motors or LEDs. The whole mechanism is moved by the person using it, turning various cranks and handles. [the guts of the machine, currently clamped to the work table in my studio – at right is a close-up where you can kind of see one of the roller dies inside the machine]

For the designs that would be embossed on the pennies, we decided to explore which animal species have survived the world according to humans, and which have not. We wanted to bring in a diversity of distinct design styles that would excite the people using the machine, so we roped a lot of great artists into this project — and perhaps not surprisingly most of them are Justseeds members. With a focus on North America, Stuart and I created a list of extinct and critically endangered animals that we wanted to highlight, and turned that list over to the artists who had agreed to illustrate them for the project.

The artists each picked an animal, and the main restriction was that their illustrations had to translate well to the tiny size of an elongated penny. We then took those drawings, reversed them, and Stuart milled them onto steel rolling dies:

When Fauna is fully road-ready as a working sculpture (later this year), people will actually be able to press a double-sided penny with the machine. These original illustrations of extinct or critically endangered animals will be embossed on one side. For the other side of the coin, we chose to focus on urban wildlife: animals that have adapted exceedingly well to the modern, human-manipulated environment. These are sometimes considered “nuisance” animals, faunal “weeds”, but they’re fascinating in their evolutionary path to exploiting the world as determined by Homo sapiens. Depending on where you live, you probably know some of these animals well: groundhogs, raccoons, whitetail deer, rats and others. Rather than represent these animals with interpretive portraits, we decided to focus on the marks they leave, their footprints, tracks.

Three designs are milled to each of the rotating roller dies. These dies are heat-treated for strength, then installed in carriages which also rotate, depending on which design a participant wants on their penny. Each carriage has three dies with three designs on each = nine designs per carriage. Two carriages – one for the animals, one for the tracks, makes for eighteen designs total, with 81 possible design combinations. The whole mechanism was the brainchild of Stuart, who doesn’t take a mechanical challenge lightly. [Stuart upends the machine in an attempt to get a thing from inside another thing. At right, one of the two die carriages]

Currently, the machine is an assembly of steel and aluminum guts clamped to a table in my studio. We’ve pressed several hundred pennies so far, creating small editions that the participating artists are now selling on Justseeds (see schedule below). During that process, we were watching for unexpected problems and general wear and tear on the machine. We’re still working out some small kinks here and there. We’re also working through the penny-design selection and coin accepting mechanisms.

We’ll be finished when we’re confident that the machine can be used when neither of us are nearby. Then, we’ll begin to enclose the mechanical guts in a decorative, pedestal-like housing. We’re still sketching that part out and drilling down the aesthetics…

As these final steps come together, we’ll be on the lookout for institutions interested in bringing Fauna into an exhibition, a gift shop, or similar “natural environment” in which a penny press might be expected to thrive. For now, we’ve pressed limited editions of single-sided pennies with the original illustrations by all the artists involved. Here on Justseeds, we’re releasing a new penny every Saturday for the next couple of months! Here’s the run-down… [penny editions spread out in the studio]

Any way to still get one of the “Don’t let the fuckers drag you down”???

Unfortunately not any more! The “Fuckers” die is totally worn out. The dies on the first machine were cut on sheet steel, turns out they stretch and warp after a few hundred pennies run through them…

How do you get those carvings on that roller?

The designs were engraved using a CNC mill, although getting them on the curved surface required a special rig that Stuart had access to last year. Our first machine just used a simpler CNC and engraved onto flat tool steel, which we then bent into a curve that fit the machine! 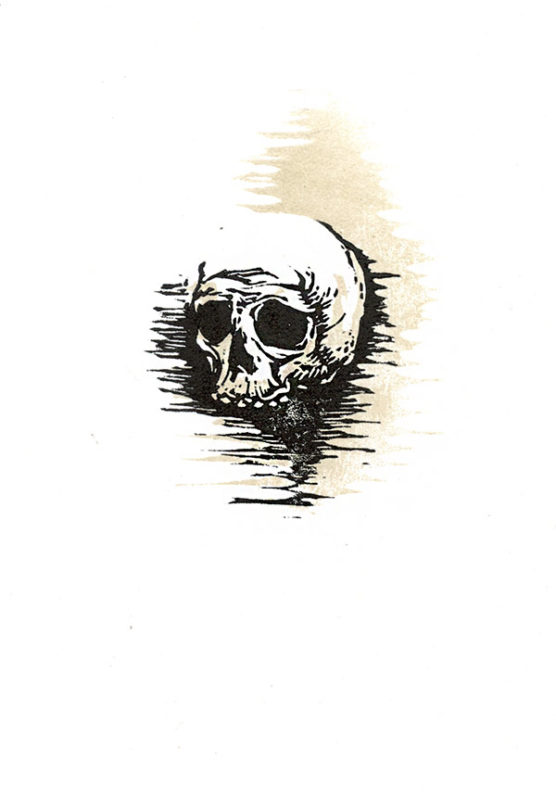